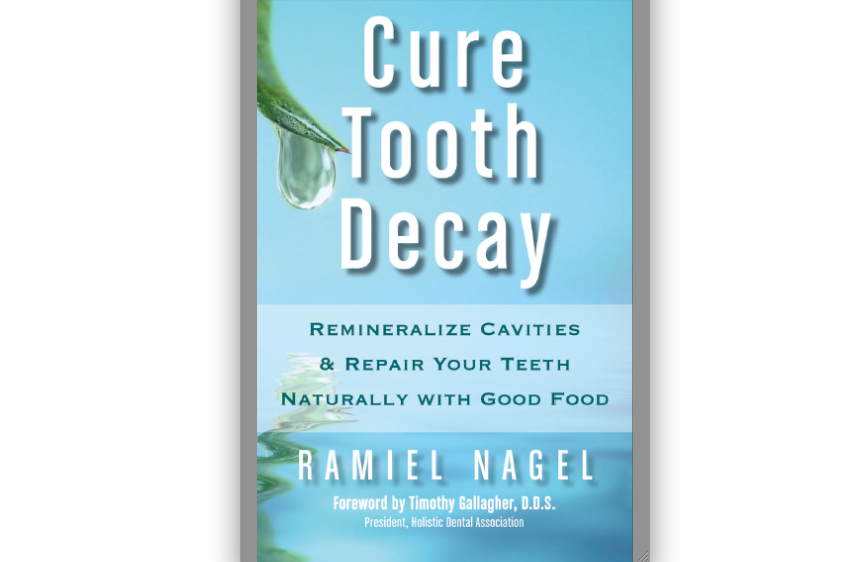 How diet can remineralise your teeth and save you visits to the dentist
BY Rosemary Byfield TIMEAugust 6, 2014 PRINT

When his baby daughter developed tooth cavities, Ramiel Nagel was shocked. How could this happen when, as a health-conscious individual, he had given her the best start in life and a healthy diet?

The search for answers was to take Nagel on a journey of research that led him to challenge the most fundamental tenets of modern dentistry and to become a passionate advocate of a paradigm shift in the field.

Changing diet can not only halt tooth decay, but reverse it, he claims. He accepts that sugar plays a significant role in tooth decay, but suggests an entirely different mechanism is at play from the one advocated by traditional understandings.

“My own daughter was a year and a half old and she developed tooth cavities,” Nagel said in a telephone interview. “In the United States they call it baby bottle cavities – but she never had a bottle and we fed her good food. We went to the dentist but they don’t have good treatment options for children so the explanations didn’t add up. What they are doing at the dentist wasn’t going to solve the problem, just putting a patch on it. I tried to find a different understanding of what was causing the problem.”

Why has tooth decay got worse?

American Nagel found answers by drawing on ground-breaking research from the United States and England done nearly a century ago, and he put his recommendations in his US best seller Cure Tooth Decay.

A 2012 British study found that more than one in four 5-year-olds in the UK have cavities in 3 or 4 teeth and the UK government estimates that figure rises to one in three of adults. Yet the NHS spends £2.3 billion on dental care in the UK.

With a staggering 90 per cent of adults in the US affected by tooth decay, Nagel is concerned that tooth decay has reached epidemic proportions. The answer to this plague is clearly not doing the same things we have done for the past century, he says.

“If that worked, the brushing, the flossing, the fluoride, chemicals, how are the dentists still in business? Doesn’t everybody do it? Or is there something wrong about what people are being told?” Nagel said.

“The problem with dentists is that they are not telling people the truth, in almost all cases a tooth cavity it is related to a nutritional problem,” he said.

In the 1930s American Dental Association research dentist Dr Weston Price was also shocked at the deteriorating dental health of the US nation. Through studying different remote and modernised communities around the world, he concluded that good or poor dental health depended on diet.

Price is quoted in Cure Tooth Decay as saying: “We studied some children here (Switzerland) whose parents retained their primitive methods of food selection, and without exception those who were immune to dental caries were eating a distinctively different food from those with high susceptibility to dental caries.”

Inspired by Price, US dentist Dr Melvin Page studied people’s blood chemistry and found that dental decay was caused by a mineral imbalance in a person’s blood, particularly calcium to phosphorus.

Nagel said Page found that the more highly refined carbohydrates and industrial foods consumed, the more it depletes minerals in the body, particularly calcium, and weakens the teeth making them prone to tooth decay. Parents in this weakened state will also conceive children with nutritional deficiencies.

The real culprit is processed sugar and sugar substitutes in food, soft drinks, particularly high fructose corn syrup, Nagel said, with Americans now consuming 120 pounds of sugar per year. Other problematic food is highly refined white flour, MSG, and preservatives. Any food containing chemicals will cause disruption in the body.

“When people understand it, the first thing they do is eliminate the toxic food,” he said.

Nagel recommends someone with tooth decay to avoid any refined sugar.

“If they don’t know what it is they shouldn’t eat it. Even cane sugar, I would avoid. Sometimes just taking out the sugar is enough. Fruit in moderation is okay, and naturally occurring sugar is okay. Remove the depleting stuff.”

Also, Nagel found inspiration from English researcher Edward and May Mellanby. Edward discovered a connection between vitamin D and rickets circa 1920. Later, May carried out research into nutrition and dental disease. A large percentage of children they studied were born with teeth improperly calcified due to a lack of vitamin D.

For Nagel, this explained why his daughter was born with less dense teeth that easily crumbled.

“Like a plant, if the soil is not good then the plant does not grow correctly. In the same way when the mother and father don’t have the right soil or nutrition in their bodies when they conceive, the child is born with deficient conditions such as deficient enamel,” Nagel said.

Modern diets advocate consuming low-fat foods, and replacing animal fats with vegetable fats, cutting people off from the foods that have been historically eaten by traditional cultures for thousands of years.

“The secret Western Price discovered, which is most important to curing cavities, is that certain animal fats from healthy animals that eat a natural diet has the fat soluble vitamins and minerals that our bodies need. When you get these vitamins the teeth harden up. In particular, all across the world traditional cultures valued the fats from animal food,” Nagel said.

“In the bigger picture if we start eating healthier and start honouring the animals and their souls, we’ll all be much healthier and happier. So that is a core part of the message. I want to facilitate that change.”

Just consuming vitamin D from animal sources will reduce cavities by about half, according to a 2012 US report analysing results from more than 20 studies.

Consuming vitamin-rich dairy from grass-fed animals hardens the teeth. The UK was highly regarded in the past for its diary products from grass-fed cows.

Price found that the people living in communities isolated from the modern world, whose teeth were in an excellent state, ate a diet high in fat-soluble vitamins A and D.

Later, in his own studies, Price gave adults and children a vitamin A and D rich cod liver oil combined with nutrient dense butter from grass-fed cows. The results were a reduction of cavities by an astonishing 90 per cent, Nagel said.

Cure Tooth Decay offers people the nutritional guidelines to heal their teeth and the science to back it up. Testimonials from people who have followed the recommendations and gained improvements can be found on curetoothdecay.com.

One person, Mike Young, a chiropractor in the US, said he went to the dentist with toothache. The dentist advised Mike needed emergency root canal surgery on two teeth. He found the book Cure Tooth Decay, started on the protocol and decided to try it for two weeks before having root canal treatment. “Within two days the pain was gone. I couldn’t believe it.” Now the holes in Mike’s teeth are getting smaller.

However, dentistry advocates that it is bacteria that causes cavities, not poor nutrition: Bacteria eat the sugar or carbohydrates on the teeth and produce acid that rots them.

“Should I say anything to the contrary it makes people upset. It fundamentally challenges their worldview,” Nagel said.

Some dentists do accept the evidence but most find it hard to integrate it into their practice.

“It’s not that they think I’m wrong. They think it’s not realistic because they have been taught a way of treating people and this other way is not in the paradigm – they don’t know how to treat a patient with nutrition or how to make money,” he said.

Ramiel Nagel is a giving a talk “How to How to Cure Tooth Decay Naturally” on 9th August at Westminster University, Marylebone Campus, London. Tickets available from curetoothdecay.com.