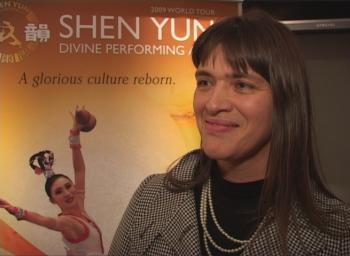 'I have a lot of appreciation for this woman,' said famous Violinist Inge Hermans about Qi Xiaochun, star on the two-stringed Chinese Erhu. (NTDTV)
Arts & Culture

Violinist and Human Rights Activist: ‘The show is really superb’

As a musician, Ms. Herman was especially fascinated by the erhu, a two-stringed Chinese instrument similar in sound to the violin.

“I am a violist, so for me it was very interesting to see how Chinese people play a string instrument, and it was really fantastic, really great,” she said.

Ms. Herman was particularly intrigued by the differences between the erhu and the Western strings, and carefully studied erhu player’s Qi Qiaochun’s technique.

“Some things are the same. She is playing on a string instrument, and she is also playing with the bow, she holds it in a very special way. So I was just very curious how she was doing it, the technique is really great, and she is playing the whole melody on two strings, it is really fantastic,” she added.

Acclaimed by audiences and critics alike, erhu virtouso Qi Xiaochun has touched listeners with her beautiful renditions of the erhu’s soulful and expressive sound.

“Really, I have a lot of appreciation for this woman, it is great. Really musical,” said Ms. Herman.

However, she admitted she had difficulty choosing her favorite performance of the show “I like everything!

“But you ask me what I like the most. … What I also liked was the synchronization between the dancers, when they come with a group on stage it is really … it is quite perfect, everything together. It is kind of vitality really.

“The show is really superb,” she said.

A human rights activist, Ms. Herman has been an outspoken member of the Belgian Friends of Tibet organization. She was particularly impressed by the show’s message.

“There is a lot of enthusiasm, a lot of willingness to show the world what is happening in China today. That I liked very much.

Practitioners of Falun Gong (Falun Dafa), a traditional spiritual discipline based on Truthfulness, Compassion and Forbearance, have been subjected to severe persecution by the Chinese Communist Party since 1999. While the persecution has been condemned by governments and human rights organizations, millions of Falun Gong practitioners in China continue to suffer.

“It is really amazing, and I hope a lot of people are coming to see the show,” she said.

DPA will perform three more shows in Antwerp on Tuesday and Wednesday before heading to Paris.