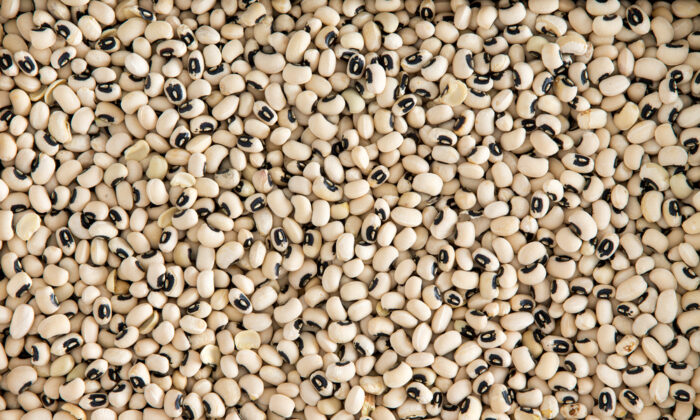 My mother tolerated no nonsense when it came to New Year’s food traditions.

On New Year’s Day, we could indulge in all the garlic-stuffed pork roast, smoked turkey, rice and gravy, rolls, sweet potatoes, fruit salad, cakes, cookies, and pies we wanted. But we absolutely had to eat two things: We had to eat a few black-eyed peas and we had to eat some cabbage.

With five children and two adults in the family, there was always someone who didn’t like something being served. And there definitely were children who cast dreading glances at the giant, simmering pot of ham-laced black-eyed peas and the tart, shredded-cabbage coleslaw.

That didn’t matter to Mom. “You have to eat the black-eyes for good luck in the coming year. The cabbage is for money. Everybody has to eat some, even if it’s just a little bit!” she would insist.

When one of us dared to point out the obvious—namely, that we had eaten black-eyed peas and cabbage every New Year of our lives and we were neither rich, nor particularly (from a kid’s perspective) lucky—Mom had an unassailable reply. “You don’t know how bad things might be now if we hadn’t eaten them!”

I grew up thinking this was some weird Cajun superstition handed down from my Louisiana farm-country relatives. It wasn’t until years later that I realized that black-eyed peas and greens, in one form or another, were Southern New Year staples.

All across the American South, from Florida and the Carolinas through Texas, on Jan. 1, mothers prepare—and force their progeny to consume—these portentous victuals.

The underpinnings of the notion that humble black-eyed peas bring good luck and prosperity are sketchy.

Certainly, black-eyed peas, a legume with origins in West Africa, have many noble qualities. They aren’t fussy about soil, don’t require a lot of watering or much fertilizer, and even return nitrogen to the soil. Black-eyed peas thrive in hot weather, making them a popular crop to put in after spring and early summer vegetables have been harvested. Such notables as George Washington Carver lauded them as a source of cheap protein. But lucky?

There is evidence that centuries before black-eyed peas arrived in North America, Middle Eastern Jews ate spiced black-eyes for luck as a feature of Rosh Hashanah, the Jewish New Year, and that Jewish families in American cities continued the custom generations later.

Apocryphal tales from the Civil War era say that when William Sherman’s troops burned and pillaged their way across the South, they left the stores of dried black-eyes, assuming them to be animal fodder. Thus, families were able to survive the winter eating black-eyed peas.

Another story notes that the Emancipation Proclamation took effect on Jan. 1, 1863, and freed slaves in Union-held Southern territories celebrated with whatever food they had on hand, namely black-eyed peas and bits of cured pork.

As for eating cabbage or greens, all stories point to the obvious association between green leaves and green paper money. There’s no real historical trace for the custom, aside from the fact that greens are cool-weather fresh vegetables, well-loved and readily available. Some places prefer to serve cabbage, others cook collards or mustard greens, and yet others—like much of Texas—opt for both.

Origins aside, there are no rules about how black-eyed peas and greens must be served.

Hoppin’ John is the most well-known dish, blending black-eyed peas with rice, ham, or sausage, and seasonings into a version of rice pilau, a beloved Carolina low-country dish. In Louisiana, another rice-growing region, dried black-eyes are slow-cooked into a thick mélange and ladled over steamed rice, and in Texas, the black-eyes are simmered with diced slab bacon, hot peppers, dry mustard, and broth.

As for more modern preparations, the late Mississippi-born food writer Craig Claiborne once noted, “I had reached a certain adulthood when I realized that they [black-eyed peas] could be delectable when dressed with a vinaigrette sauce,” thus paving the way for future chefs to create cold black-eyed pea dishes.

New Orleans celebrity chef Emeril Lagasse makes a jalapeño- and bacon-rich black-eyed pea salad that comes close to being a salsa, and Pioneer Woman Ree Drummond creates an actual salsa featuring black-eyes, cucumbers, tomatoes, and cilantro. And of course, every third food blogger and TV chef has his or her own version of Texas caviar, a cold, spicy black-eyed pea dip.

“My parents had a bumper crop of black-eyed peas this year, so my freezer is stocked with them,” the Jacksonville, Florida, aviation training specialist explained. “They also gave us wonderful fresh sweet potatoes. My wife and I were experimenting with the Instant Pot and came up with this dish. It’s fast, easy, and delicious. Definitely a keeper.”

My own black-eyed pea experiments have included a cabbage and black-eyed pea slaw, and collard rolls. Collard rolls are a bit labor intensive, but fun to serve. Just blanch whole collard leaves until they’re tender enough to manipulate, rinse and shake off excess water, then place a line of cornbread dressing in the center of the leaf, with a line of cooked black-eyed peas in the center of the dressing. Roll up the leaf—either sushi-style or pinwheel-style, depending on the size of the leaf—and serve warm.

Most of the time, however, I just go for the classic slow-cooked black-eyes with ham or sausage, the same dish that beckoned every New Year’s Day of my childhood, along with a simple coleslaw.

And yes, I do force my husband and children to eat both cabbage and black-eyes, because, well, you never know.