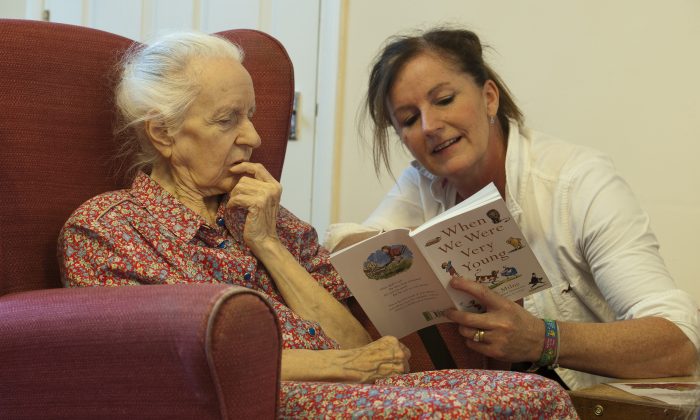 A volunteer reads poems to a dementia sufferer at a care home in Stratford, UK. (WILL OLIVER/AFP/Getty Images)
Health

Doctors Urge Focus on Diet to Tackle Dementia in UK

Lifestyle, not medicines, should be the focus of tackling dementia say leading doctors, who are urging the UK government and the G8 Dementia Summit to make prevention strategy a priority.

During the summit in London on Wednesday, December 11th, top doctors from G8 countries wrote an open letter to the UK health secretary Jeremy Hunt and Prime Minister David Cameron calling on them to make the Mediterranean-style diet central to policy to prevent dementia.

One of the signatories of the letter, former chair of the Royal College of General Practitioners professor Clare Gerada, said the summit and government health strategy should focus on “empowering the individual to lead a healthier lifestyle”.

“It’s about saying to the G8 to not just focus on medicines, which is what I think tends to happen, but to start focusing on healthy diet, looking at what one can do for oneself, rather than over dependency on health systems,” said Gerada, who is NHS England adviser.

“You don’t hear the G8 talking about prevention,” she said.

Several studies have concluded that a Mediterranean-type diet – plenty of whole fruits and vegetables, olive oil, nuts, oily fish, and low in refined carbohydrates – is associated with slower cognitive decline and a lower risk of developing Alzheimer’s disease.

London cardiologist Dr Aseem Malhotra said the evidence base was “overwhelming” for the Mediterranean diet in preventing all of the chronic diseases plaguing the Western world, including Alzheimer’s.

“As far as I’m concerned this is a no brainer. If it’s a choice between promoting a better diet over pushing drugs that benefit the pharmaceutical industry more than patients, I’d choose the former every day of the week,” Malhotra said in a statement.
The letter authors are calling for a Mediterranean-style diet to be a recommendation as part of the NHS Health Checks programme.

With declining consumption of fruit or vegetables in the UK and in other European countries, the doctors say it is “imperative” to educate professionals and the public in the importance of diet and lifestyle in preventing the onset of dementia.

Other experts on Alzheimer’s agree that a healthy diet and plenty of exercise can help prevent dementia, but say other factors, besides an unhealthy lifestyle, contribute to the development of dementia and urgently need more investigation.

Jeremy Hughes, chief executive at the Alzheimer’s Society, said the G8 Summit could be the defining moment for dementia that people will look back on many years in the future. “Dementia is fast becoming the biggest health and social care challenge of this generation. We must tackle dementia now,” he said in an email.

“Lack of funding means dementia research is falling behind other conditions.”

“It is shocking how dementia research is decades behind cancer. Currently there are six times more UK researchers working on cancer than dementia,” Hughes said.

Head of research at the Alzheimer’s Society, Dr James Pickett, said in an email he also hoped more funding would be given to find a cure for dementia.

Alzheimer’s Disease International released figures last week in a policy brief “The Global Impact of Dementia 2013-2050”, revealing that 44 million people now have dementia worldwide, with the total set to rise to 76 million by 2030.