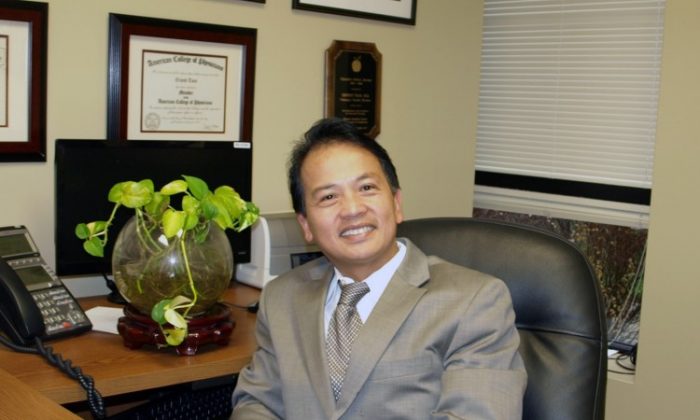 Doctor Making a Difference in the Fight Against Hepatitis B

After having almost no formal education while he was living through the war in Vietnam, Dr. Loc T. Le struggled to do well in school in the United States and finally achieved his dream of becoming a medical doctor. Just a few weeks ago, after many years of success in practicing medicine and teaching, Dr. Le became the chairman of the National Task Force on Hepatitis B: Focus on Asian and Pacific Islander Americans.

Now, at the start of his two year tenure as chairman of the Task Force, Dr. Le will dedicate himself into educating the nation about Hepatitis B and advocate for research, prevention, and treatment of the disease.

Dr. Le was born in 1961 and lived in Quang Tri, a small town at the border between the north and south Vietnam. His early education was poor and frequently interrupted due to the war. Still, his father made sure that ten of his children studied. His youngest and oldest sisters died during the war due to a lack of medicine. Later he decided to become a doctor.

Dr. Le describes a story when he was like the “boat people” sailing away from Vietnam with others on a boat when they were rescued by a U.S. Navy ship when he was 13 years old.

When he came to the U.S., he struggled very hard in school. Not only did he lack formal education, but he didn’t know English well. However, a few years later, he graduated at the top of his class in high school. His high achievements continued in college and throughout his career.

According to his bio, Dr. Le graduated from Union College in New York with a degree in Mathematics and Biology in 1984. He received a Doctor of Medicine degree from the University of Rochester School of Medicine and Dentistry in 1988. Dr. Le completed his Internship and Residency at the Sinai Hospital/Johns Hopkins Hospital, where he received the Best Resident of the Year Award in 1991.

Dr. Le was Chairman of the Division of Gastroenterology and Director of Endoscopy at Harbor Hospital of Baltimore in 1998-2004. He also had a part-time appointment as an Assistant Professor of Medicine at the University of Maryland School of Medicine in 1995-2012 and an Instructor in Medicine at Johns Hopkins School of Medicine in 1995-2005. As a teaching faculty at Sinai Hospital and Harbor Hospital, he received the Golden Apple “Best Teacher of Year” Award in 1996 and 1998.

He explains why the issues of Hepatitis B are particularly serious and important to the Asian population.

He says Hepatitis B among Asians is different from the Hepatitis B among the general population in the U.S. Within Hepatitis B, there are 8 subtypes, which are also labeled A, B, C, D, etc. Asians tend to have Hepatitis B subtypes B & C, which are harder to treat with more chronic diseases. Due to the lack of screening, treatment, and prevention, especially at the time of birth, there’s a high chance of getting it as an infant when the immune system is weak, which can develop into cancer or cirrhosis of the liver decades later by age 40.

On the other hand, Dr. Le explains, in the general American population, the disease is usually transmitted between young adults in the late teens or early twenties, and it is usually transient and rarely becomes chronic.

Dr. Le tells a story of how Taiwan took a big step in vaccinating newborns, and screening and treating pregnant woman, which made a dramatic difference in reducing the transmission of the disease from mother to child. He says, through the Hepatitis B Task Force, he wants to aggressively advocate the implementation of the CDC guidelines for Hepatitis B screening and vaccination in the high risk populations in the United States, namely the Asians and the Pacific Islanders.

According to Dr. Le, Hepatitis B in the Asian communities is also a silent disease where many people don’t know that they have it until 80 percent of the liver is damaged or they develop liver cancer and it’s too late. Dr. Le says these people in high risk groups need to be tested. He says education is important.

Dr. Le wants to make a real difference in the lives of people, and is very busy reaching out to the media, politicians, NGOs, CDC, NIH, drug companies, community activists, college students, and other physicians. He is also working to form a panel of eminent advisers to help carry out the difficult mission of the Task Force in reducing Hepatitis B infection in the Asian and Pacific Islanders in the U.S.

Dr. Le is a partner at the Woodholme Gastroenterology Associates, P.A., where their mission is to improve the gastrointestinal health of patients and the quality of their lives.

When asked about how he balances his personal life with his work, he says it’s very hard, but he has a lot of energy. He says, “I sleep only 3 to 4 hours a night… It’s a challenge every day, but it’s a fun challenge.”