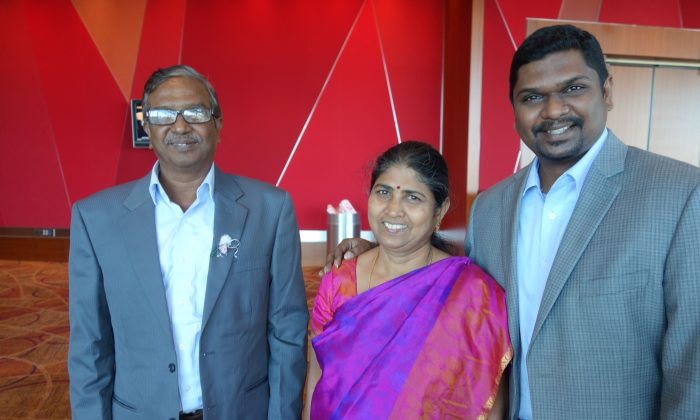 It was written in the stars that Dr. Saveraj Amilraj (L) and his wife Agnes, flanked by son Gerald, would be at the Cobb Energy PA Centre watching Shen Yun Performing Arts in Atlanta, on Jan. 16, 2016. (Mary Silver/Epoch Times)

“We may not be back here at all, so I trust we were meant to come,” he said.

On a visit to his son and family, Dr. Amalraj and his wife Agnes plan to return home to India in March, so he grabbed the only chance he might get to see Shen Yun. He said his son Gerald, who lives in Atlanta, is able to see Shen Yun at anytime.

With an all-new program each season since its inception in 2006, the classical Chinese dance and music company brings China’s cultural heritage to five continents. However, Shen Yun has yet to visit India, thus Dr. Amalraj took the opportunity.

“It was good, it was magical. The time was flying,” said Gerald Amalraj. He said the ‘Handkerchiefs’ dance made a strong impression on him. “I’ve not seen that before. Especially the flying kerchiefs. That was special to me,” he said.

According to Mr. Amalraj, his father completed a doctorate in alternative medicine and as a result, developed an interest in Chinese medicine.

But at this moment, Dr. Amalraj’s mind was elsewhere. He recalled the auspiciousness of the closing dance scene, aptly named, ‘Hope for the Future.’

“We have come from heaven, that’s the Chinese philosophy, and from heaven support is coming. Help is coming. And we go back to heaven,” he said. Then, with a chuckle, he said, “that’s if we’re good.”