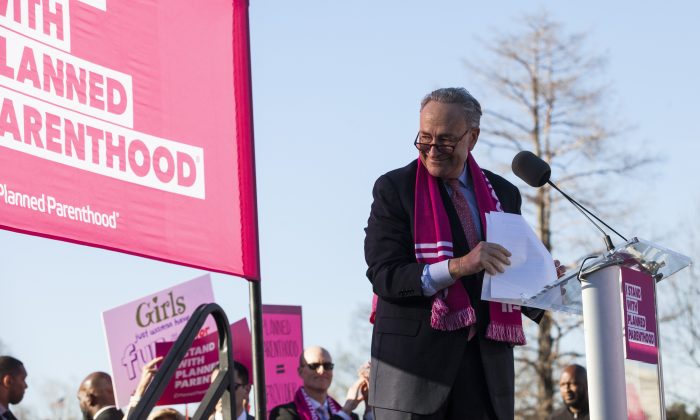 Most Democratic senators on Feb. 25 voted against a bill that would require health care providers to provide medical attention to newborns that survive a botched abortion. The Epoch Times asked them why they did so.

The bill, the Born-Alive Abortion Survivors Protection Act, failed to clear a vote to overcome a potential filibuster, with 53 senators for (shy of the 60 needed) and 44 against. Only three Democrats raised their hand in favor of the bill: Joe Manchin (W.Va.), Bob Casey (Pa.), and Doug Jones (Ala.). Three Republicans did not vote, apparently because of scheduling issues and plane flight delays: Kevin Cramer (N.D.), Lisa Murkowski (Alaska), and Tim Scott (S.C.). No Republican was against.

Introduced by Sen. Ben Sasse (R-Neb.), the bill requires that, in case of a botched abortion, “any health care practitioner present at the time the child is born alive shall exercise the same degree of professional skill, care, and diligence to preserve the life and health of the child as a reasonably diligent and conscientious health care practitioner would render to any other child born alive at the same gestational age.”

In addition, after caring for the child, the health care practitioners would be required to “ensure that the child born alive is immediately transported and admitted to a hospital.”

The Democrats have labeled the bill an attack on women and doctors.

“The legislation would force medical professionals to provide invasive and ineffective medical care to fetuses with fatal abnormalities, even if it’s against the family’s wishes or if it would not do anything to extend the fetus’ life,” Sen. Chris Murphy (D-Conn.) said in a Feb. 26 emailed statement.

Similar arguments were presented by many other senators, including Dianne Feinstein (D-Calif.), Chuck Schumer (D-N.Y.), and Richard Blumenthal (D-Conn.).

Republicans, on the other hand, have accused the Democrats of supporting infanticide. So who’s right?

Abortions late in a pregnancy, such as after the 20th week from the woman’s last period, may take several days to perform. First, the woman undergoes a procedure to get her cervix dilated, which may take up to two days. Some abortionists would start the procedure with a digoxin injection that poisons and kills the unborn. But a poisoned fetus has little value for companies that collect the remains for medical research.

Other abortionists wait for the dilation and then snip the umbilical cord, depriving the unborn baby of oxygen and nutrients and causing it to die. Sometimes, however, the dilation may cause the woman to go into labor and give birth to a premature baby.

It is this situation that Sasse’s bill would most likely apply to.

Some legal protection applies to this situation already. Since the Born-Alive Infants Protection Act of 2002, a baby, even if born prematurely or after an abortion procedure, is considered a person and alive upon clearing the birth canal if it “breathes or has a beating heart, pulsation of the umbilical cord, or definite movement of voluntary muscles.”

In a 2012 Live Action undercover video, Cesare Santangelo, an abortionist in Washington, explained that in this situation, “legally, we would be obligated to help it survive. But it probably wouldn’t.”

He continues, “It’s all in how vigorously you do things to help a fetus survive at this point. … Obviously, you’re here for a certain procedure. … We would not help it.”

The undercover reporter was 24-weeks pregnant. At that point, her child had more than a 50-percent chance of survival with hospital care.

When the video was published in 2013, Santangelo said he was just trying to reassure the woman, who was asking whether she’d need to take responsibility for the child if it was born alive.

What Would the New Bill Do?

The bill would still leave it up to the medical professional to decide what care to provide, but only if “a reasonably diligent and conscientious health care practitioner” would choose such a course to care for the child.

Doctors have commonly exercised such a judgment, including decisions to give up.

A 2015 study found that hospitals actively provided treatment to only some 22 percent of babies born at 22 weeks. About 23 percent of those cared for survived. All the untreated died within 24 hours.

At 24 weeks, however, hospitals actively treated more than 97 percent of infants and of those nearly 57 percent survived. All those untreated also died within 24 hours.

The study excluded about 4 percent of cases where the infants had “recognized syndromes or major congenital malformations” where “factors besides prematurity may have influenced the prognosis and treatment decisions.”

Sasse’s bill appears crafted to ensure that a baby is not left to die just because, as Santangelo put it, the woman was there “for a certain procedure.”

The bill’s second requirement—to have the baby transported to a hospital—has been opposed by some abortion providers in the past, to the dismay of conservative legislators.

“What objection could you possibly have to obligate a doctor to transport a child born alive to a hospital where, it seems to me, they would be most likely to be able to survive?” a Florida state lawmaker asked Alisa LaPolt Snow, a lobbyist for the Florida Alliance of Planned Parenthood Affiliates, at a 2013 hearing.

“What about the situations where it’s in a rural health care setting, the hospital is 45 minutes, an hour away that’s [the] closest trauma center, emergency room?” she replied. “There are just some logistical issues involved that we’ve got some concerns about.”

LaPolt also brought up the argument that, after a botched abortion, the “decision [on what to do next] should be between the patient and the healthcare provider.”

But one of the legislators retorted, “I think that at that point the patient would be the child struggling on a table, wouldn’t you agree?”

“That’s a really good question,” she replied. “I really don’t know how to answer that.”

“Very few women have an abortion late into their pregnancy,” Blumenthal said in a Feb. 25 release. “[It’s] almost always due to severe health risks.”

Sen. Tom Carper (D-Del.) commented along the same lines in a Feb. 25 tweet: “Women do not have later-term abortions because a pregnancy is suddenly ‘inconvenient.’”

It’s not clear, however, what the senators are basing their comments on.

Late-term abortions, such as those after 20 weeks, are relatively rare, with only about 15,000 a year getting reported. But there’s a dearth of data on why women undergo them. Florida appears to be the only state publishing the data, and only by trimester. The state only reported two third-trimester abortions in 2018. One due to a “Life Endangering Physical Condition,” the other for “Serious Fetal Genetic Defect, Deformity or Abnormality.” These two reasons were reported for about 11 percent of the second-trimester abortions.

Historically, late-term abortions appear to have often been performed on healthy mothers and babies.

In 1997, during the campaign against the now-outlawed partial-birth abortion, Ron Fitzsimmons, then-executive director of the National Coalition of Abortion Providers, spoke up about misinformation spread by pro-abortion activists.

“When you’re a doctor who does these abortions and the leaders of your movement appear before Congress and go on network news and say these procedures are done in only the most tragic of circumstances, how do you think it makes you feel? You know they’re primarily done on healthy women and healthy fetuses, and it makes you feel like a dirty little abortionist with a dirty little secret,” he told American Medical News (pdf).

Multiple media reports at the time confirmed Fitzsimmons’s account. “Most are for elective, not medical reasons: people who didn’t realize, or didn’t care, how far along they were,” a doctor at an abortion facility told New Jersey newspaper The Record in 1996.

Since then, the number of abortions has dropped by about a third. Still, Fitzsimmons made it clear that the market for elective late-term abortion wouldn’t disappear with the partial-birth abortion ban. “The real-world impact on doctors and patients is virtually nil,” he said, as doctors would simply switch to a different abortion method—which is exactly what has happened.