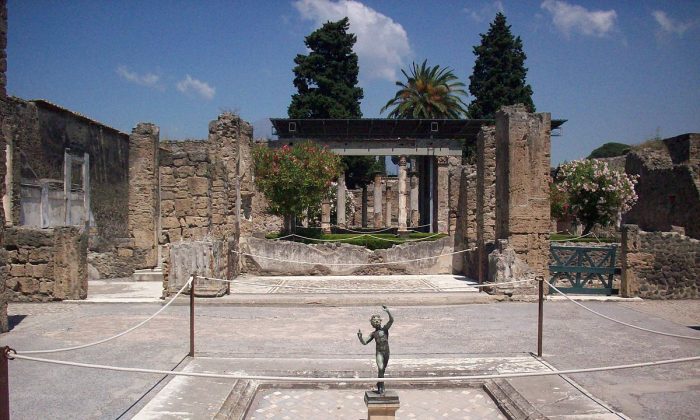 A copy of the Dancing Faun, photographed in 2008, placed in the center of the impluvium at the House of the Faun, Pompeii. The original sculpture would have been placed at the lip of the pool. (Porsche997SBS/Wikimedia Commons)
Art Speaks

Dancing Faun of Pompeii: Removed From Habitat, Out of Context

The destructive power of the eruption of Mount Vesuvius in A.D. 79 effectively ended civic life in Pompeii and its surroundings. However, the rain of falling ashes almost perfectly preserved this city frozen in time. For this reason, it is considered one of the most important archaeological sites in the Western world.

Unfortunately, due to the continued extreme neglect of the Italian government, this treasure risks its very existence as it crumbles into irreversible oblivion.

Even in a declining state, an urban fabric so well conserved makes the ancient world more tangible. A modern-day visitor, conditioned by the static perfection displayed in the important museums of the world, would be surprised by a colorful, organically dynamic place where art played an integral role in daily life.

More than mere decoration or an expression of wealth, art was a natural expression of humanistic values that have been almost eliminated in modern-day Europe. Crossing class distinctions, painting, sculpture, and art objects were found in the tavern, temple, and stately home.

The largest residence of Pompeii derives its name from a small statue that was found on its premises. The House of the Faun takes up an entire city block and was full of wall paintings and important mosaics.

But it is not surprising that this bronze figure should garner such attention. Truly a masterpiece, the Dancing Faun is a testament to the sophistication of antique taste. Its extremely high quality has led some experts to date this piece as Late Hellenistic (200 B.C.) or at least a very good Roman copy of a Greek original.

Archaeologists believe that it was originally positioned on the edge of the impluvium, a shallow pool-like structure meant to collect precious rain in the first atrium of the house, wrote Francis Haskell and Nicholas Penny in their book, “Taste and the Antique.”

In the middle of an ecstatic step, the faun looks up in gratitude toward the heavens and the divine gift of water. Wonderfully modeled, its taut contour not only expresses the anatomy but also brings movement and energy to the form. More than simple nature spirits, fauns were the benevolent personification of man’s connection with nature. Our statue once lived in a colorful room: accompanied by the trickle of water, the sky, and the bustle of the household.

The day after its discovery in 1830, the Dancing Faun was moved directly to the Naples National Archaeological Museum, according to Haskell and Penny. The statue is now kept in a glass case in a room with other displaced relics.

This museum is a perfect example of the 19th century’s obsession with a perceived rational objectivism in the collection’s careful categorization by era, theme, and location. The buff-colored walls create a uniform backdrop against which each work can be studied individually. The sterile environment has the negative effect of rendering art into an artifact.

Context is fundamental for experiencing art properly. In the necessary act of preservation, much of the faun’s function, meaning, and reasoning behind its formal design has been lost. Not only are our aesthetic judgments influenced but also our very expectations about art’s purpose are questioned.

Unfortunately, art history has greatly contributed to this confusion. Differing scholarly models use masterworks as pawns to justify their arguments. Very often, personal agendas are portrayed as fact.

In his book “The Nude,” Kenneth Clark disparages the Dancing Faun in relation to an Early Renaissance example as being “artificial and dead.”

That could not be further from the truth. One of the gravest errors of art history is to detach the differing elements of form, subject, and environment from an integral whole and present them as representative of a particular work.

In the dissection and compartmentalization of art, we lose its very purpose: the creation of significant objects that give meaning to who we are and what we do.

As a result, we are now conditioned to reserve aesthetic experiences for cultural institutions. The indifference to the deteriorating state of Pompeii and the fate of our forgotten frozen faun highlights a sad truth about our contemporary reality: Art’s natural habitat is being destroyed, and art is now relegated to art zoos.

Matthew James Collins is an American artist based in Florence, Italy. He creates works in oil, fresco, marble, and bronze. His website is matthewjamescollins.com