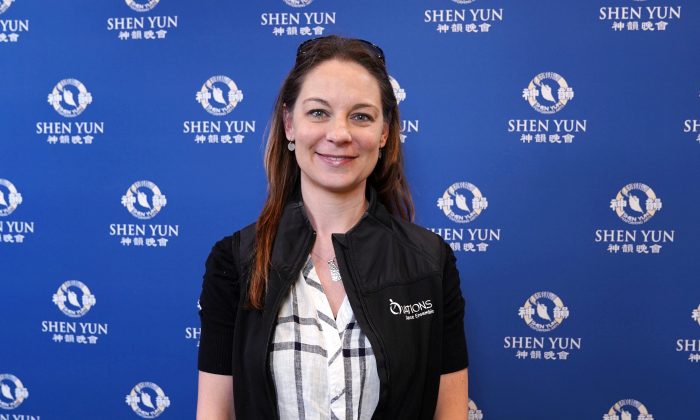 PHILADELPHIA—Dance studio owner and instructor Rita Ogden is familiar how much hard work goes into every performance. When she experienced Shen Yun Performing Arts, she was amazed by their efforts, and the techniques and precision each dancer exhibited on stage.

Ogden is the owner of Ovations dance studio and is a judge on a dance circuit. She is also a member of the Screen Actors Guild and has appeared in several movies such as “Shooters,” “Rocky Balboa,” “Lady in the Park,” “My Sassy Girl,” and “Invincible.” Some of her choreography has appeared in a Glaxo SmithKline commercial and on the Tomorrowland stage in Walt Disney World.

On Feb. 23, Ogden took 54 members of her dance team to see Shen Yun during the matinee at the Merriam Theater in Philadelphia. She said she wanted to inspire them, showing that hard work does pay off.

“I think it is a really strong message to my students,” she said. “Knowing your lines and pointing your feet—that just doesn’t happen overnight. It takes a lot of work and our students know that too. … I think this show just shows that hard work does pay off and it does come together. … [and] it all comes down to that technique and focus and that desire to be the best that you can be.”

New York-based Shen Yun is a premier dance and music company with a mission to revive China’s 5,000 years of semi-divine culture. The performance uses classical Chinese dance as its foundation but also includes a system of ethnic and folk dances.

Classical Chinese dance has a history of thousands of years and was passed down continuously within the imperial palace and ancient Chinese theater and opera. It was absorbed wisdom from every era and dynasty before becoming a complete system of dance embodying traditional aesthetic principles with its unique dance movements, rhythms, and inner meaning, according to the Shen Yun website.

“It made me want to know more about that art form so that when a piece does come on the stage, I can judge it to the best of my ability, with the knowledge that I have,” she said.

The dance movements of classical Chinese dance can bring out the inner meaning of intrinsic thoughts and feelings, reflecting the peculiarities of human nature, the standard for human conduct, moral concepts, mental state, and one’s value system. China’s deep cultural traditions are contained in classical Chinese dance, allowing its movements to be richly expressive.

“I think that the story’s really being told 100 percent down to the sparkle in the eye and the expressions. And just the comedy behind it, too, was brilliant. Like there’s fun moments and serious moments. It’s a very wide range of storytelling, and I think the kids are enjoying it,” she said.