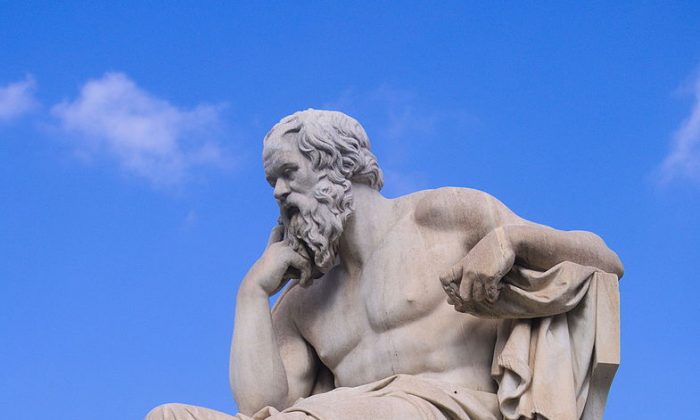 “Men, you should have seen Socrates when the troops escaped from Dilos. In that battle, I had better opportunity to admire him, as in that battle I was on a horse and wasn’t so much afraid. He was walking so calmly, watching our people and the enemies, and it was obvious to everyone—even to the ones that were far away—that if someone tried to touch that man, he would defend himself very bravely.”—General Alkiviades in Plato’s book Symposium

Socrates (470-339 B.C.) was born in the golden era of Greece. In his time, he saw the rise of democracy after the reign of tyrants; he saw the Parthenon and the Acropolis coming up from ruin; and he saw all areas of music, art, literature reach their zenith. But he also saw Greek society’s decline as he grew up, and finally felt the corruption of Athens at the age of 70, when Athenians condemned him to death.

Socrates is a unique figure of history. He embodies today’s definition of a philosopher—he didn’t care for material goods, instead devoted himself to the cultivation of the soul through virtue. “Virtue is when you avoid exaggerations,” as he said.

He was married and had three sons, worked initially as a sculptor but left the job to immerse himself in philosophy. He had no formal schooling and left no scriptures. The things we know about him are from his students and mostly from Plato’s works and the plays and comedies of the time.

Socrates never accepted money from anyone and never promised to offer knowledge or success. Dressed poorly, without shoes, he walked from morning to night in the market and the gym discussing endless topics with anyone who would care to engage him.

“I ramble for nothing more than to convince the young and the old to not preoccupy themselves with their bodies or their money, but with their souls, on how it can be better. I tell them that virtue it’s not created by money, but money and all other material goods both private and public can be created by virtue. If by saying that, I corrupt the youth, that would be harmful. Whether or not you set me free I would still do the same things even if I would die many times.”

Socrates sought to lead people to his conclusion through what we now call the Socratic Method. He listened to the discussion silently and asked questions as if he knew nothing about the subject until the conclusion arises from the entire crowd. He had the uncanny ability to lead someone to agree even if he didn’t want to agree. And some people hated him for that, as he could prove his sayings without arrogance and they could not say that he was wrong.

He once said, “I know you won’t believe me, but the highest form of human excellence is to question oneself and others.” He always claimed: “I know that I know nothing,” hinting that human wisdom is very limited—only God is wise.

The Athenian government gave him the choice of keeping silent or death by poison—he chose to drink poison. This was the fate of so many wise men after him. If Socrates had lived in any other era, it is likely that people would have persecuted him because he “bothered” the corrupted minds that couldn’t accept things out of self-interest.

Socrates’ ideas and his method of teaching, have played a defining role in history. Today the Socratic method is used in law school, in psychotherapy, human resources training and development, and lesson planning in classrooms.