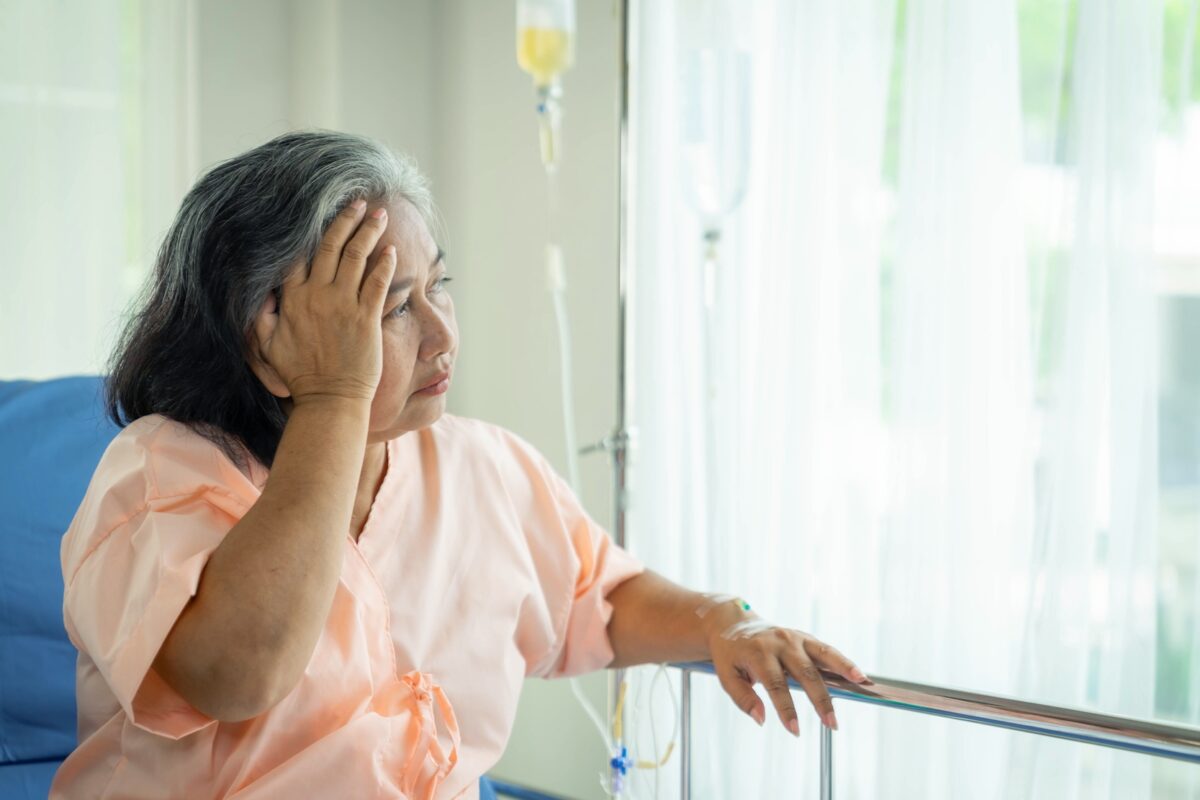 New research may explain one way COVID-19 may contribute to neurological ailments.(Photo_imagery/Shutterstock)
Covid

New research has found a plausible mechanism to explain COVID's tie to damaging changes in the brain
BY Jennifer Margulis TIMEApril 10, 2022 PRINT

For some, it’s just a sniffle. But for others, COVID-19 can hit hard. Either way, some people who get COVID-19 will suffer from long-term effects. This is known as “long COVID,” and its sufferers are often referred to as “long haulers.” Chances are you already know about long COVID and you may even have been affected by it or have friends or family who are. What is less well known, however, is that neurological issues are common in long COVID.

Brain inflammation, stroke, chronic headache, disturbed consciousness, cognitive impairment, and “brain fog” (an all-encompassing phrase to describe a condition that usually manifests as slow thinking, memory lapses, and difficulty concentrating) can all result after infection with the virus known as SARS-CoV-2.

Even the illness’s unusual hallmarks, hyposmia, and hypogeusia—better known to us non-scientists as loss of smell and taste—are thought to be due to changes in nervous system function.

But while both clinicians and patients have noticed a myriad of brain issues post infection, scientists don’t know very much about how SARS-CoV-2 infections can lead to impaired brain function.

That may be changing.

A study published on Feb. 3 in Alzheimer’s & Dementia sheds light on a potential physiological mechanism behind the neurological problems COVID-19 survivors experience.

While the deeper insight into what is going on is good news, unfortunately, there’s bad news, too.

The study, led by Andrew R. Marks, a cardiologist and chair of the Department of Physiology and Cellular Biophysics at the Vagelos College of Physicians and Surgeons at Columbia University in Manhattan, consisted of analysis of brain tissue collected from 10 people who died from COVID-19.

Marks’s team looked posthumously at the brains of four women who ranged in age from 38 to 80, and six men, ages 57 to 84.

It’s already known that the spike protein of SARS-CoV-2 binds to ACE2 receptors all over the body, including in the heart, lungs, kidneys, and epithelial cells that line the blood vessels.

Scientists also believe that the multi-system failure that can result in death from COVID-19 is likely due to this invasion of heart and lung cells via these ACE2 receptors.

Since the receptors have been invaded by the virus, the activity of the enzyme associated with the receptors (angiotensin-converting enzyme) is reduced, as scientists explained in a 2021 article published on The Conversation.

The damage to the lungs and heart is usually uppermost in doctors’ minds when patients are experiencing severe illness. But, it turns out, there are also ACE2 receptors in the brain.

Unless you’re a neuroscientist, this is pretty technical. Stay with me anyway. Decreased ACE2 activity is associated with increased activity in transforming growth factor-beta (“TGF-beta”). And high levels of TGF-beta in the brain are associated with irregularities in the “tau” proteins that stabilize nerve cells, specifically due to something called “hyperphosphorylation.”

Phosphorylation, a normal biological process, is the addition of phosphate to an organic molecule, in this case, the tau protein.

Hyperphosphorylation is the addition of too many phosphate groups at too many sites.

Hyperphosphorylation can result in proteins with excess filaments that get tangled up. And these tau filament “tangles” are associated with Alzheimer’s disease.

Marks and his five colleagues at Columbia University investigated whether people who died of COVID-19 exhibited evidence of tau protein irregularities that are associated with Alzheimer’s.

A significant body of recent research suggests that calcium ions “leaking” from certain ion channels in the brain, known as ryanodine receptors, may cause these tau irregularities.

Healthy brain function relies on ion channels, such as the ryanodine receptors just mentioned, operating as they should. Just as there are dangers when an electrical wire is “leaking” electricity due to a short, there are risks when these ion channels leak ions. Oxidative stress may be responsible for depleting calbindin, a protein that helps keep these channels closed, preventing them from leaking. When the levels of calbindin are low, channels that should remain closed may start to leak calcium.

Too many calcium ions floating around in the brain or anywhere else in the body can cause a number of health problems.

Marks’s team examined the brain tissue of the 10 people who died from COVID to see if there was evidence of leaks.

People who suffer from Alzheimer’s show evidence of tau filament “tangles” only in the cortexes of their brains, not in the cerebellum.

However, this Columbia University research indicated that, unlike with Alzheimer’s, COVID may cause disturbances in the cerebellum as well.

The cerebellum is involved in balance, coordination of movement, language, and posture, according to the University of Texas Health Science Center.

Other recent research has shown that 74 percent of hospitalized COVID patients have had coordination problems. If COVID is compromising the cerebellum as well as the cortex, this may help explain the coordination issues clinicians have observed.

Interestingly, though this was a small study, all the people who died had evidence of brain pathology. The TGF-beta marker was found in all the brains, even those of the younger patients who had exhibited no sign of dementia prior to coming down with COVID-19.

Most people have heard that the presence of beta-amyloid plaques in the brain is an indication of Alzheimer’s. Even though lowered ACE2 activity is also associated with an increase in beta-amyloid plaques, the Columbia team didn’t find any changes in the pathways that lead to the formation of amyloid beta in the brains of the patients who died from COVID (with the exception of one 84-year-old male who was previously suffering from dementia). This is one notable distinction between the pathology of COVID-19 and Alzheimer’s or dementia.

Marks’s interest in the ryanodine ion channels is long-standing, and his recent COVID-related research may lead to financial benefits should other researchers affirm his findings. In 2011, a research team led by Marks demonstrated that a class of drugs, Rycals, may be effective in treating heart failure and muscle disorders by stabilizing the same ryanodine ion channels this new research indicates may be affected by COVID-19 infections.

One drug from this class, ARM210, has been in the clinical-trial stage but has been officially classified as an orphan drug because the illness it was intended to treat was so rare.

Marks told ScienceDaily that his study indicates a potential target for therapeutic interventions for the neurological symptoms of COVID.

“My greatest hope is that other laboratories will look into our findings, and if they are validated, generate interest in a clinical trial for long COVID,” he said.

Both Columbia University and Marks own stock in ARMGO Pharma, Inc., the company that has been developing drugs to target ryanodine channels. They also own patents on Rycals, according to a conflict of interest statement at the bottom of this study. Another of the study’s co-authors, Steven Reiken, has been consulting for ARMGO. While conflicts of interest like these are fairly typical for published scientific research, and they don’t invalidate the research, they are an important part of the overall picture that shouldn’t be ignored.

It also isn’t unusual for a drug created for one purpose to find new life treating other conditions. In some cases, these new uses prove more important than the original intended use of the drug.

In their paper, the Columbia team wrote that “ex vivo treatment of COVID-19 patient brain samples with the Rycal drug ARM210 … fixed the channel leak.”

While that may suggest a promising avenue for further investigation, applying a drug to brain tissue in the lab is a long way from giving it to living patients.

While COVID is linked to neurological issues, the same also appears to be true with the vaccine itself. My colleague Stephanie Seneff, a senior research scientist at the Massachusetts Institute of Technology and author of the book “Toxic Legacy,” is concerned that COVID-19 vaccines also have the potential to cause brain damage.

“Vaccines produce the spike protein, which is the part of the virus that binds to the ACE2 receptors,” said Seneff, who wasn’t involved in the Columbia research. “I suspect this means that the vaccine could also disable the receptors and cause the same neurological damage.”

In fact, Seneff said, brain damage from the vaccine may be more common than brain damage from the naturally acquired infection. Vaccine-induced spike proteins “get into the brain more easily than the virus does,” she said. “The virus only gets into the brain when a person has a compromised immune system. But the vaccine is injected into the muscle, which means it bypasses natural barriers that would normally keep the virus out of the brain.”

In May 2021, Seneff and her colleague Dr. Greg Nigh, an oncologist based in Portland, Oregon, published a paper in the peer-reviewed International Journal of Vaccine Theory, Practice, and Research explaining their hypothesis that the mRNA vaccines may be worse than the disease itself.

Since then, she said, she has been studying the reports of vaccine adverse events that are collected by the Centers for Disease Control and Prevention. In this new research, Seneff has found that 96 percent of all of the reported adverse outcomes in the year 2021 that have been related to neurological issues are connected to COVID vaccines. These adverse neurological events include memory disorders, mobility issues, difficulty swallowing, and loss of sense of smell.

“All these things that are showing up in VAERS are striking,” Seneff said. “Overwhelmingly, the events that show neurological issues are following COVID-19 vaccines. I honestly don’t know why people aren’t absolutely shocked by these numbers. Compared to the other vaccines, these vaccines seem tremendously dangerous.”

Jennifer Margulis, Ph.D., is an award-winning journalist and author of “Your Baby, Your Way: Taking Charge of Your Pregnancy, Childbirth, and Parenting Decisions for a Happier, Healthier Family.” A Fulbright awardee and mother of four, she has worked on a child survival campaign in West Africa, advocated for an end to child slavery in Pakistan on prime-time TV in Paris, and taught post-colonial literature to non-traditional students in inner-city Atlanta. Learn more about her at JenniferMargulis.net.