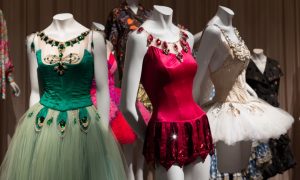 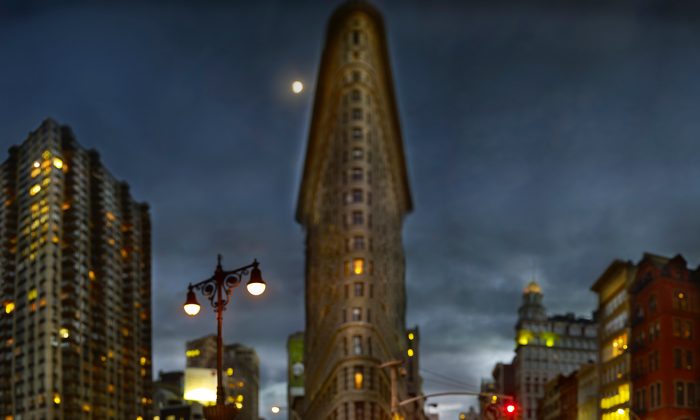 NEW YORK—If you want to distill the essential personality of a place, stay and observe for a day. If you want to understand how that personality came to be, stay for a few centuries. Two exhibits at the Museum of the City of New York stitch together multiple views of New York’s landscape and history to create something like a god’s-eye-view of these 304.8 square miles and how they’ve evolved.

Thirty-seven-year-old Taiwanese-born photographer Jeff Chien-Hsing Liao has spent years steeping in various New York locales, from easily recognized street corners in Times Square to obscure lots in the seedier parts of town. His exhibit at the Museum of the City of New York features more than 40 large-scale composite photographs digitally stitched together from frames taken from one spot over several hours.

Liao stands there all day so we can vicariously linger a while and take in the many little details offered by these extra crisp images.

In “5 Pointz, Long Island City, Queens,” for instance, you can read each tag and scrawl on every wall and awning, plastered with graffiti. This would be 5 Pointz the outdoor art exhibit—a “graffiti mecca,” as it is called on the website.

“IF YOU ARE CAUGHT ON THE ROOFS YOU WILL NOT BE WARNED AND THE POLICE (‘POLICE’ is triple underlined) WILL BE CALLED. MNGMT.”

This, in plain white spray paint, was—of course—written on a roof.

Liao came to New York at age 18 to study photography at Pratt and then at the School of Visual Arts, where his master’s thesis gave rise to the Habitat 7 series (2004–2006), for which he made panoramic portraits of places along the 7 train route on his commute from Queens to Manhattan. He also captured flooded parts of the city after Hurricane Sandy.

This type of photography is not new, and is not exclusive to Liao, and New York City as artists’ subject is far from a novel idea. While most of his shots read as straightforward panoramas, Liao’s strength is in nocturnal scenes.

The energy of the night overtakes mechanical time. All the visual clutter of the streets, so hard to ignore by day, are airbrushed away by amber streetlamps and the lava flow of cars’ brake lights. It’s impossible to take in the entire stretch of 42nd Street where the AMC theatre and McDonalds are. But a 10-foot-long print makes Times Square at night look almost serene with all the detritus (and most of the crowds) deleted.

The poetry inherent in taking in a sweeping cityscape from far away is only enhanced by the clarity a digital composite can achieve. It all makes you wonder how Liao does it. But a video loop that is meant to explain the process leaves the mystery perfectly sealed.

One of the museum’s permanent exhibits, Timescapes is a short Stanley Tucci-narrated history of New York that plays 15 and 45 minutes after each hour in the second floor mini-theater.

The story begins when Manhattan (Manahatta) was the verdant home of the Lenape and ends with these post-9/11 times. That’s over 300 years condensed over 7 million times to fit into 22 minutes.

The videos and historical photographs are shown on a three-paneled screen, with the center screen a map keeping us geographically on-point.

It explains why Wall Street is called Wall Street, why the Bronx is called the Bronx, and how Manhattan’s street grid, the Hudson River, and the Erie Canal came to be. In a flash, New Amsterdam becomes New York, immigrants flood in and out of the Lower East Side in rapid succession, Fifth Avenue is torn down and rebuilt in glass. We dwell for a full minute in the burnt out, crime-ridden ’70s before city policies and citizen effort ushers in a rapid turnaround.

It feels like watching one of those time-lapse videos wherein a child becomes a grown up in a matter of seconds, only we’re talking about millions of lives. It can get to be a bit overwhelming. But that’s what standing still is for.