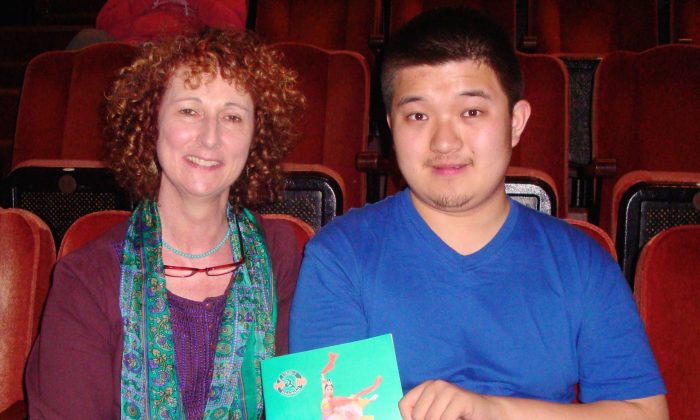 SYDNEY—”Tonight’s orchestra is particularly fine, in terms of the togetherness, the ensemble, and the expression,” said Dr. Deborah De Graaff after seeing Shen Yun Performing Arts on the evening of Thursday Feb. 12 at the Capitol Theatre.

Ms. De Graaff is a clarinet chamber music recitalist, concerto soloist and is a recording artist for the ABC. Both her recitals and conservatoire teaching have taken her throughout Australia, Asia and the United Kingdom. Currently she is a casual lecturer in clarinet at the Sydney Conservatorium of Music, the Australian Institute of Music and the University of New South Wales. She is also an academic whose papers have been published in several conferences and by BRM, and she also has a PhD in Music Psychology.

“The music is absolutely beautiful,” she said.

Shen Yun features the world’s foremost classically trained dancers and musicians, bringing an all-new performance each year to more than 100 cities worldwide. Ms. De Graaff has attended a Shen Yun performance four times, and was drawn back once again. This year she came with one of her clarinet students.

The Shen Yun orchestra has mastered the art of seamlessly integrating classical Chinese and Western instruments in its arrangement, and this has earned deep admiration and respect among music professionals around the world.

“I love the very traditional sounds. I love the Chinese oboe and the erhu, and I love hearing those sounds,” she said. “I also think they’re very successfully mixed in with the [Western] classical instruments.

The erhu, a two-stringed instrument with four thousand years of history, is one of the most important classical Chinese instruments. It is incredibly expressive and can depict many emotions. Its timbre is said to be closest to the human voice, and, being just as versatile, it can be tender or sonorous. Other traditional Chinese instruments featured in orchestra include the pipa and suona.

But it wasn’t just the music. “The dance is … it’s extraordinary. It’s exciting choreography,” she said, impressed also with the synchrony and coordination between the dancers and the music.

Referring to a program Chopstick Dance of the Mongolian Ladies as an example, she said: “That was beautifully coordinated. The ensemble is beautiful. They’ll often twist and move and move their hands, and then their head will move on the offbeat, so it’ll be like feet, hands, head, head. Very clever, and beautifully together.”

“As a musician, I most identify with the [values of the] ancient peoples through their dance and through their music, so that speaks to me, that culture that’s so special and so rare,” she said. “For me, the ancient tunes and melodies speak to me in this, in a very special way.”

Ms. De Graaff enjoyed Shen Yun’s expression of humour in its lighthearted story-based dances, and said that it provided a stark contrast to other more serious dances that depict modern-day persecution.

“It makes it more shocking when it’s there, but it also means that we’re much more compassionate as an audience. We can be more warm and more interested in what’s going on, because the humour is there and the dark side of things are there as well,” she said.

Shen Yun was founded in 2006 with a mission of reviving 5,000 years of divinely inspired Chinese culture. Each dance in Shen Yun exemplifies the beauty, grace and wisdom of traditional Chinese culture, with virtues such as courage, loyalty and filial piety expressed through movement.

Story-based dances are drawn from ancient myths and legends, or modern day events. Some stories are humorous, some serious—but in all, goodness prevails.

“The fact that a touring orchestra and a touring group of people can travel the world and say: ‘We’re persecuted but we want to give you something beautiful, I think that says it all, doesn’t it?” she added.

For Bernard Nicholas, an aircraft maintenance engineer at Sydney International Airport, the evening was his first time Shen Yun experience. He was captured by the visual and aural display.

“Very colourful and eye-catching!” he said after the first half. “You can see that a lot of effort and time has been put into this show, to make it where it is right now. I’m really enjoying myself. Can’t wait for the second half to start!”

The performance also resonated with Mr. Nicholas on a deeper level. He used the words “entertaining and enlightening” to describe Shen Yun. “[Shen Yun] actually tells the history from before the modern China,” he said.

“[The performance] is all about [China’s] culture, the traditions and empathy. And, sadly, it’s all gone now. It’s all walked right out of the window.”

Mr. Nicholas said that the one thing he would take home from Shen Yun’s performance would be the message of truthfulness, compassion and tolerance.

“People are more interested in profit than compassion. So, it’s something where people will really have to start looking into.”

He concluded with a hope for future theatregoers coming to see Shen Yun.

“[Shen Yun] will have a positive impact. Hopefully, people will come to this show with an open mind, being able to absorb and actually understand, and think outside the box, and really look into things like ‘Hey, the world isn’t what we think it is!'”