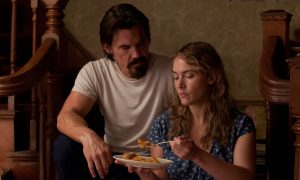 I reviewed “Code Black” in 2014 when it came out, the same year my brother got brain cancer. Soon after writing the review, I flew from New York to California to take care of him. The doctor showed us a golf-ball-sized tumor. It needed to come out. More on this later.

In 1986, in what can only be described as a move toward communism, Congress passed legislation declaring that hospital emergency rooms have to take in everyone. Public ERs therefore became our low-income health safety net.

As a consequence, ER waiting rooms are bursting at the seams. Praise be to our ER doctors who do what they do out of a deep sense of service. Because it’s a war zone.

Actually, “code black” is the Los Angeles County Hospital color code for an overflowing ER waiting room. “Code blue” is low volume. If 1 is a heart attack and 4 is a common cold, today’s hospital waiting rooms are packed with 2’s who all have to wait hours for treatment.

Hospital staff are at their limit. Which is why these super-docs crafted this superb documentary. It’s a cry for help. Our U.S. health care system is at the breaking point.

“Code Black” grants us a doc’s-eye view of America’s ground-zero emergency department: L.A. County Hospital’s “C-Booth.” It’s where, according to McGarry, more people have died and been saved than in almost any other square footage in America.

And there’s Jamie Eng, M.D. She always wanted to be like the cool senior staff in the trauma ward, who had it all under control.

Danny Cheng, M.D., says that as an Asian immigrant, his choices in life were doctor, lawyer, or world-class pianist. Dad subscribed to “Where there’s a will, there’s an ‘A.'” Otherwise, it was spanking time. Regardless of Danny’s parental pressure, all these type-A doctors share a deep desire to serve.

Due to the earthquake code, the 1930s-built L.A. County General Hospital was forced to rebuild, and so we meet these young doctors as they transition to a more spacious, state-of-the-art facility—but not before we’re exposed to a viewing of the full-on onslaught of the original C-Booth.

C-Booth is “ER” on steroids in the sense that no TV show can capture the real-deal noise, highly organized commotion, ripped-apart (sometimes dead) human bodies, blood-soaked scrubs and shoes of exhausted doctors, and repeated calling out of times of death.

C-Booth is an emotional gut-punch. If we hadn’t already had our sensibilities blunted by “ER,” “Chicago Hope,” “Grey’s Anatomy,” endless gruesome “CSI” episodes, and the long lineup of cinematic ER situations over the last 20 years, C-Booth would be slightly unbearable.

But we have, and are thereby freed, in a sense, to focus on the complex topics, controversies, problems, and debates presented here.

In the wake of the rebuilding, a new ER culture rises; policies, documentation, and crushing regulations encroach like strangling vines. Doctors are forced to log in, ad infinitum. As McGarry says, “I feel like I should log in to go to the bathroom.”

In the words of one senior staff physician, “The regulations have come home to roost.” And quality care sailed out the window.

Neither group has any interest in status or money. Navy SEALs fight to the death, and ER doctors fight for life. Both situations are a bloody war, both require an elite set of talents and skills, and the bonds between teammates are similarly powerful.

The day of the “cowboy ER doctor”—the flying by the seat of one’s scrubs, on sheer talent, fearlessness, and adrenaline—is over, in part, due to a desire for privacy and dignity. It’s a valid point. A male nurse agonizes quietly about the fact that he had to show a woman her recently deceased mother stationed on a gurney for lack of space, in a room containing used urinals and bedpans, with a psychotic patient screaming obscenities in the next room.

In 2013, “Code Black” won for Best Documentary at both the Los Angeles Film Festival and the Hamptons International Film Festival. It’s a crying shame that this fine film had such minimal distribution. It should have been a blockbuster. “The Incredible Hulk,” released at the time, was far more popular than the incredibly horrendous state of U.S. health care. Had it been promoted at blockbuster scale in 2014, would we possibly have more answers as to how to deal with a pandemic today?

A four-star rating means I was on the edge of my seat. Five stars means I look forward to multiple viewings. There won’t be a second viewing of “Code Black,” but it’s definitely edge-of-the-seat material. It gets five stars for being an outstanding labor-of-love project, having beginner’s-luck brilliance in its ability to captivate, and for containing in-depth subject matter of great importance.

Clearly, the legislation favoring a more socialist stance regarding ERs is making the patients suffer. It is also overtaxing the talents of an elite type of physician, the only kind capable of handling this mess; but the stress can eventually lead to burnout. The question remains: What is the best possible situation for doctors to be able to apply their trade?

As I mentioned at the outset of this article, I reviewed “Code Black” in 2014 when it came out, the same year my brother got brain cancer. The doctor showed us a golf-ball-sized tumor. My brother needed a major operation, but he refused, citing the fact that he was a qigong practitioner and would eliminate the tumor with qigong.

Qigong (or chi kung) is a millennia-old Chinese energy-enhancement practice, closely related to tai chi and kung fu. Note the closely related names: tai-chi, chi-gong, gong fu. It is said to be good for one’s health.

So we went home. He got worse. We took him to a second hospital, closer by. The waiting line was extremely long. The head of surgery told him that he’d be dead in hours if he didn’t have the surgery. I made the decision to operate for him.

While he was recovering in post-op, I mentioned to the nurse on duty that I’d gotten déjà vu in the waiting room because I’d just reviewed a new documentary called “Code Black,” which was about packed waiting rooms.

The nurse said: “Actually, honey, the real reason you were getting déjà vu is because this is the actual Code Black hospital. We’re it. You’re here.”

Despite the Code Black doctors (not the ones from the movie cast) informing me to prepare myself for the fact that my brother would basically be a vegetable and need intensive care for at least six months—none of their predictions came to pass. Lance Jackson came to the realization that he hadn’t been truly committed to his qigong practice, and decided he was now going to do the practice correctly. He put his heart into it.

On his third day of recovery, he said, “You know what? I’m good.” And he proceeded to get up out of his hospital bed and walk home. And he started working a heavy construction job soon after, like nothing had happened.

If that’s not inspiring in the time of COVID, I don’t know what is.

And so the moral of the story is, we can wait for America to fix our hospitals. Or we can maybe start practicing qigong.