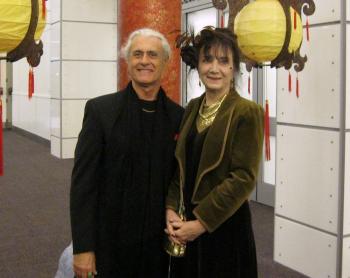 Among the theatergoers were Frank and Susan Fetta, who both work in the arts. They spoke enthusiastically of their impressions of the New York-based company that is reviving ancient China’s artistic traditions.

Mr. Fetta is a classical musician and conductor of a number of symphony orchestras in the Los Angeles, including The United Chinese orchestra, while Mrs. Fetta is an illustrator.

Mr. Fetta said, “I loved it. I love the colors and the culture … it’s amazing. Beautiful! We’re learning lot.”

Affirming the educational value of the show, he added, “I think that’s the biggest thing, not only seeing this culture be exposed, but you’re also learning some deep truths about China and what’s been going on all these 5,000 years in China, and to see how deep the culture actually goes.”

“It’s a beautiful production and the skill of the dancers is amazing. Perfect dancers—they make no mistakes. It’s really an incredible group of dancers.”

The Shen Yun New York Company Orchestra's unique combination of Western and Eastern instruments, playing all original compositions, left him wishing that he were able to identify all the Chinese instruments because of the especially beautiful way they blended together.

Mrs. Fetta said she was loving the show. “And I am very interested in the philosophy that they’re communicating. It’s so beautiful. It’s otherworldly, but natural at the same time.

“I like the celestial creatures coming down and bursting on to the stage. I loved that,” she said.

She also enjoyed the colors, saying they were very beautiful and made her feel very hopeful.

Mr. Fetta concluded by saying, “We so appreciate being here very much.”