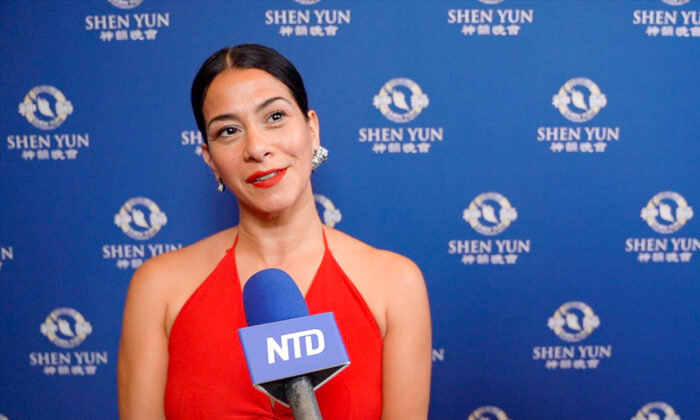 “I enjoyed [Shen Yun] a lot. I appreciated the artistry. The choreography was wonderful. The colors, the scenery was all really entertaining. The acrobatics are amazing, too,” said Morano, who took in the performance on Feb. 14, 2020, at the Mahaffey Theater.

Classical Chinese dance is an ancient art form that New York-based Shen Yun has breathed new life into as part of its mission to revive traditional Chinese culture itself.

According to Shen Yun’s website, “All these jumping, turning, and flipping techniques, along with the exquisiteness of the bearing and form, give classical Chinese dance special expressivity.”

“[Shen Yun’s mission] is beautiful. It’s absolutely beautiful. I would definitely recommend it and I would see it again,” she said.

China’s authentic culture is considered divinely-inspired and contains rich inner meaning as well as thousands of years worth of profound legends, spiritual wisdom, and beauty. But Shen Yun cannot perform in China today, due to a campaign by the Chinese Communist Party to eradicate traditional Chinese culture.

Morano said she appreciates the divinely-inspired aspect of Shen Yun’s performance. “I appreciate it. I appreciate learning about the Chinese culture and their dance and where it’s inspired from. So it gives me a better understanding of how to enjoy a performance,” she said.

The dancer and choreographer had more to say about the artistic and technical aspects of the dancers’ performance.

“I appreciate the symmetry, and everyone keeping their lines,” Morano said. “I know that’s important because I’m also a choreographer. The acrobatics were all perfectly landed, you know. It was very technically entertaining. As well as the digital background; we really liked that a lot. The colors of the costumes were really highlighted by the light. So, very enjoyable.”

“The stories were all really entertaining. Our favorites were the water sleeves because of how they retracted their sleeves and then threw them out like flowers. And that they did respect to the ethnic dances. We also appreciated that as well,” she added.

“To the artistic director, I would keep going, keep moving forward.”

“The dancers—bravo,” Morano said, applauding with her hands as she said it.

“You know, it’s a beautiful thing to see people enjoy their art and celebrate their culture. I do it, so I love it. I appreciate it a lot,” she said.