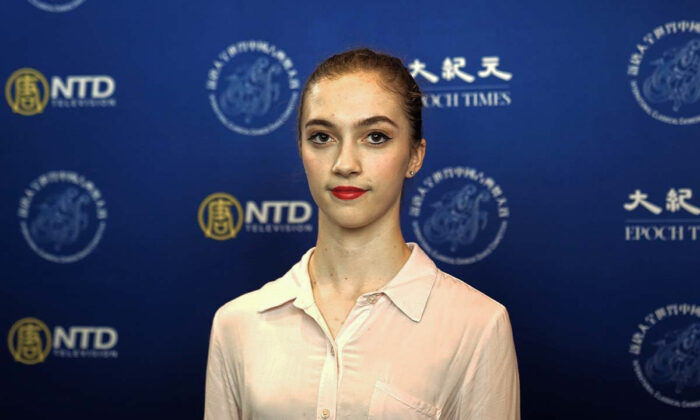 Lillian Parker took to the stage over the weekend at the Sugar Loaf Performing Arts Center, in long water sleeves, portraying the Taoist spirit of yin and yang.

“I thought it was pretty hard, it has a lot of Chinese flavor to it,” Parker said on Sept. 4 after her performance in the semi-finals of the NTD International Classical Chinese Dance Competition, part of a series of competitions aimed at reviving traditional arts and culture. In this instance, the event brought over 100 young dancers from around the world to New York to bring to life a dance form nearly lost in China under communist rule. Parker will move onto the finals round on Sept. 5

For the young Canadian dancer, it’s been a long journey of discovering and immersing herself in a culture foreign to her in her quest to study classical Chinese dance. Today, Parker is a member of the world renowned Shen Yun Performing Arts.

“It’s been a great process of learning that balance of yin and yang through this dance,” she said.

Flow of the Daoist Spirit

“Usually water sleeves are very gentle and elegant, but this [dance] has a stronger aspect to it,” she said. Typically used for elegant court dances in Shen Yun, the long, flowing sleeves the dancers wear drift and billow about as if the fabric was flowing water. But this dance uses those same props in moments of strength and power, and required a different type of precision from the dancer.

“I really like to do explosive moves like jumps, or to use a lot of force all at once. But for the sleeves, if you suddenly use a lot of force, it just gets stuck, it kind of flops down. So actually, the more you relax, the more the sleeve will have power,” she explained. “So it’s kind of like giving my power to the sleeve. …  So the whole process is like okay, like, relax, breathe, just like be in the dance. And then that way, you can actually have the feeling come out, I don’t always need to, like, ‘boom, boom, boom’—I actually need to calm down and feel it, which I wasn’t used to.”

Parker had seen another dancer perform this piece, “Flow of the Daoist Spirit,” in a previous year of the competition and was captivated by the unique repertoire. But when her teacher encouraged her to perform this piece herself, Parker was surprised—and then stymied. The dance expresses a principle, rather than being a character piece, and at first Parker didn’t know what to express.

“I slowly tried to feel the breathing, feel the sleeves,” she said. As her thinking slowed down, it felt the music did too, and suddenly she had ample time with which to execute the movements.

“Everything in moderation: you can have harshness and softness, but they always go back to each other, it can’t go to one extreme, after hardness there is softness,” she said. “When people watch this dance, you can see after every hard move there’s a soft move, it’s always flowing, until it combines, like the taiji [yin-yang symbol].”

There is another, crucial aspect that aided Parker this time. Shen Yun incorporates the ancient method of “shen dai shou” into its dance training. The term translates roughly into “the body leading the hands,” and sounds simple but is not easy.

“It makes the dance really different,” Parker explained. All the force and motion starts from the middle, rather than the arms, and the result is a “really clean energy flow,” she said, where the sleeves not only become an extension of her body, but stay soft and malleable as she dances, rather than feeling and looking like just her sleeve.

“This is something a lot people are looking for.”

Parker entered classical Chinese dance when her mother, a dancer, saw a performance of Shen Yun and realized this art form was different, more expressive, and had deeper meaning than other dance forms. She asked Parker, then 5 years old, if she wanted to sign up for a dance class as something novel and fun.

When her real training began at Fei Tian, the school that trains all the Shen Yun dancers, Parker realized there was something beyond the techniques and flexibility and it was “a totally different world” of inner feeling.

“Each time you break through a level there’s always another level that is more detailed and meticulous,” she said.

And of course, there was the culture barrier. Suddenly all her friends knew Chinese, and she was immersed in this new culture. “It was a bit overwhelming at first!” she said. “But it helped a lot.”

Classical Chinese dance is made up of postures and movements that have a distinctly Chinese feel. A defining factor of the art form is the inner feeling that drives the body into movement—an inner feeling to convey principles deeply rooted in the traditional, divinely inspired Chinese culture.

“The hardest part is definitely to get the Chinese feel,” she said. Sometimes it’s in something as small as where the eyes look, or the angle of her head, and her colleagues will note she hasn’t quite gotten it. “It’s a lot of watching other people and learning,” she said. The cultural immersion and study has allowed her to get a crash course on traditional Chinese culture, but it would not have been possible without a lot of perseverance on her part, Parker added, and this is a trait she greatly admires from the culture.

“The spirit of not giving up,” she said. Many of her Chinese friends are more introverted than Westerners in general, she said, and don’t show a lot of their feelings on the outside. “There is a noble, persevering spirit.”

With reporting by Yichun Lin.