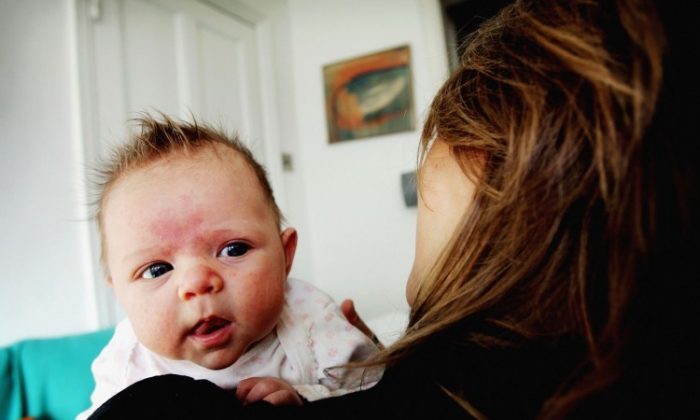 The ‘Children of the 90s’ study questioned 14,000 pregnant women about their health and lifestyle and studied their children over the last 21 years to determine the health of young people. (Graeme Robertson/Getty Images)
Mind & Body

‘Children of the 90s’ Health Study Comes of Age

A ground breaking long-term study started in the 1990s to provide a resource for investigating the health and wellbeing of young people has celebrated its 21st birthday this week.

Fourteen thousand pregnant women from the Bristol area took part in what is known as the “Children of the 90s” study to improve the health of young people by examining various factors affecting them and their children.

The mothers completed questionnaires about the diet, lifestyle, behaviours, wellbeing, and health of both themselves and their young ones. When the children reached the age of seven they were questioned, examined, scanned, measured and weighed; they also gave samples of blood, urine, hair, nail clippings, and baby teeth every year or two up to the present. The parents’ health factors have also been monitored closely.

Professor Jean Golding, who initiated the Avon Longitudinal Study of Parents and Children (ALSPAC) at the University of Bristol in 1991 and was awarded an OBE for her work on the project, has paid tribute to the parents and children who participated in the research. “They, together with our research staff have already achieved so much that has changed the lives of children all over the world,” Golding said in a statement.

“The unique aspect in ALSPAC is the extraordinary range of data that has been collected,” said the current scientific director of ALSPAC, professor George Davey-Smith, in a video on the ALSPAC website.

One distinctive feature of the study is that data was collected even though it was not known what it might be used for. “For example, the placenta we collected 21 years ago when the recruiters to the study gave birth were stored and no one was really doing any research on them, but recently several groups have been utilising placentas for doing work on them,” Davey-Smith said. “Jean Golding’s amazing vision when she set the study up was to include everything you could.”

ALSPAC data is being used for research in many countries around the world besides the UK such as, the United States, Canada, Australia, New Zealand, and in Europe.

Davey-Smith said that the aim of the research was to produce findings that improve public healthcare or influence government policy.

Some of the results of the study have included:

• Pregnant women who ate omega-3 rich fish had children with higher-than-average IQs, language abilities and better eyesight.
• Stress in pregnancy could lead to asthma and allergies, dyslexia and autism in their children.
• Asthma and allergies in children were more prevalent when women took frequent doses of paracetamol in the late stages of pregnancy; the use of eczema creams containing peanut oil were also found to increase allergies.
• Air fresheners and aerosols, and frequent use of household cleaning products were associated with diarrhoea, earache and allergies in babies.
• Children who have 15 minutes of exercise a day showed a lower risk of childhood obesity.
• Youngsters who watch more than eight hours of television a week have a greater risk of adult obesity.

Golding told Bristol newspaper The Post that the scientific study has confirmed what her grandmother already knew: “She would always say put a baby to sleep on its back, that babies should get some sunshine and that fish was good for the eyes and the brain, and not to worry about a bit of dirt because it is good for them. What we have done is show that it is true.”

Having secured funds of £6 million to continue the study, it will now focus on the next generation: the babies of the original children and also expand to studying the mothers and fathers of the first babies in more detail. Davey-Smith is hopeful that “by integrating new technologies” the ALSPAC study will become “even more a world leading resource than it is”.

To mark the “Children of the 90s” 21st birthday, a conference in Bristol was held this week with speakers including some of the 650 international academics who work with the ALSPAC data. Topics discussed included juvenile heart disease, bone development, reproductive health, risk factors for heavy drinking, and the causes of childhood asthma and allergies.