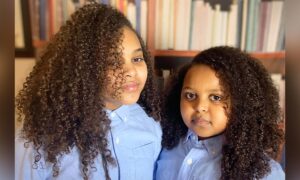 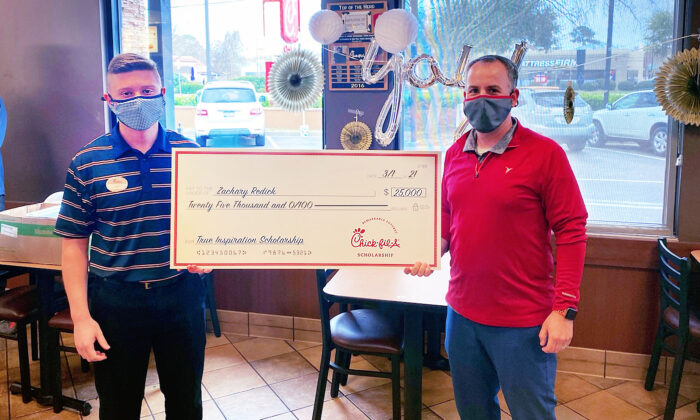 A Coastal South Carolina University student, Zachary Redick, is in the news after he was awarded a $25,000 scholarship from the restaurant where he works—this after he had to quit school to care for his mother who was battling cancer.

Redick started working at a Chick-fil-A on James Island in Charleston, South Carolina, when he was 15, hoping to earn some extra cash to help his family.

Working at the restaurant became a source of stability for the teen and his family. In turn, Redick, now 21, has shown tremendous leadership as an employee and became a team leader within a few years of joining the business.

He eventually had to quit school to look after his sick mother until she passed away last April, but he aspired to advance his career and started focusing on his education last year.

In March 2021, Chick-fil-A awarded him the True Inspiration Scholarship, worth $25,000, for his leadership and inspirational contribution, in addition to financial need.

His continued devotion to his education online also demonstrated remarkable dedication towards his coursework.

“This scholarship is truly life-changing for my academic career,” said Redick, Coastal Carolina University (CCU) reported. “With having no financial support from my parents next year, this scholarship makes schooling a possibility. Instead of worrying about how I am going to afford my education, I can now make my dreams a reality because of this scholarship.”

According to the company, recipients can choose to use these funds at any institution for as long as it is accredited.

“Being a Chick-fil-A James Island team member means so much more than just working at a restaurant,” said Redick. “To me, it means I get to make a meaningful impact on the Charleston community. Becoming a team member has given me boundless opportunities and has shaped me into the person I am today.”

Redick intends to use the money to pursue a bachelor’s degree in business management. He is currently attending CCU both virtually and in person where he plans to pursue further studies. The money and the laptop he received with the scholarship will be of great help in his career, he said.

Redick plans to get a master’s degree after completing his bachelor’s from CCU.

Chick-fil-A has awarded scholarships worth $19 million this year alone to 7,492 employees in the United States and Canada through its Remarkable Futures Scholarships initiative.

However, only 12 students received the $25,000 True Inspiration Scholarship award.

The money is given to team members who require financial need and have the potential to excel in life based on their academic career, community involvement, and leadership skills.