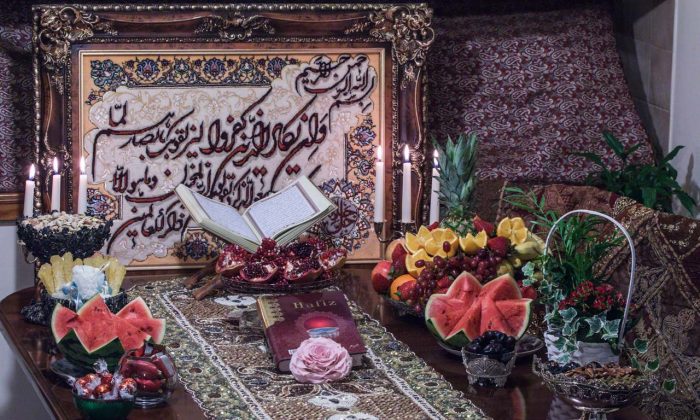 Celebrating Yalda, the Longest Night of the Year

As Earth orbits around the center of the solar system, the sun shines bright on the planet, casting life and energy. Living beings are animated subject to the absolute light of a moving and blazing sun. There is light in the darkness. Light is born from the darkness of the night each day and Mother Nature changes its course and dresses up in a new outfit at the beginning of every season.

The winter transformation begins after the longest night of the year (and the shortest day), regenerating life. The winter solstice is an astronomical event, which occurs in the Northern Hemisphere when the sun is at its utmost distance from the celestial equator and reaches its southernmost point.

Despite the weather getting colder, the days get increasingly longer with the promise of warmer days to come in the forthcoming months.

It is incumbent upon us to honor the gift of life and keep the spirit of collectiveness in the light of peace, friendship, and love at the time of Yalda and Christmas.

The solstice has been long celebrated since ancient times, symbolizing the rebirth of nature. In prehistoric times, pagans who worshiped the sun held celebrations, eating and drinking. They believed that the winter solstice was the birthday of the two gods Sol Invictus (the invincible sun) and Mithras. Zoroastrians believed that the darkest night of the year was ominous and people should stay together to protect themselves from evil.

There are many variations on winter celebrations around the world, encouraging families to get together. The most common and well-known event among Christians in the west is Christmas. Other cultures celebrate the winter solstice in the form of Yalda (Iranian), Saturnalia (Greco-Roman), Karachun (Slavic), Hanukkah (Jewish), Kwanzaa (Americas), and Yule (Germanic).

Historians believe that this festive night is rooted in ancient Persia, which was transferred to Europe at the time of the Greco-Persian wars. Afterwards it was expanded in the Roman era in the form of Christmas celebrations.

In Iran, the winter solstice is called Shab-e-Yalda or Shab-e-Cheleh. Shab-e-Cheleh implies the beginning of the 40-day period of the winter season. Iran is trying to register Yalda in the UNESCO World Heritage list.

The festive tradition of Yalda has survived throughout the history of Persia after Islam and has continued lasting deeply in the culture and tradition of this nation as one of the most celebrated nights in Iran today. Life in ancient Persia was very much in tune with the rhythms of nature. People organized their lives and practices according to the solar calendar, which marked the seasons based on lunar cycles.

Yalda is focused on the patterns of lunar phenomena on Earth to celebrate the rebirth of the sun. It is considered a turning point in as the beauty and fun of the winter season emerges around Dec. 21. The Iranian New Year (Nowrouz), follows similarly and is celebrated on the Spring Equinox around 21st March, when the winter season culminates and the blooming spring flowers flourish.

I remember in the old days when all the family used to sit on the floor gathering around a Korsi to celebrate Yalda in a long and memorable night. A Korsi is a type of traditional furniture shaped as a low rectangular table with a heater underneath, covered with blankets all over it. It would also have an extra decorative quilt made of velvet or covered by a colorful rug. The Korsi was heated by a brazier with hot charcoals in a pan placed in the center or warmed by an electric heater.

On this night, friends and family get together to spend the time until after midnight, reading poems of Hafez and Mulana. The poetic books of Divan-e-Hafez and Masnavi-e-Mulana are so influential and mixed in the life of Iranian people that they can be found in the house of every family. They read the poems in every festive celebration because they believe that those poems have been inspired by the Quran.

The festive night starts with eating and drinking. It is common to have fruits such as pomegranates, red apples, and watermelons. The redness symbolizes the shades of origin and the spark of life. The table is also decorated with Ajeel which consists of a variety of dried fruits and nuts. Eating nuts and fruits symbolized keeping illness away, having a healthy life, and wishing for more prosperity until spring.

Persians used to celebrate Mithra during Yalda night by decorating an evergreen cypress tree (called Sarve), which stands vertically and tough against the coldness of winter to symbolize resilience amidst hardships. They wrapped their wishes to the tree in anticipation of an answer to their prayers. The Christmas tree is also rooted in the tradition of Mithraism, which was introduced to Germans by Luther in the 18th century.

There is so much in common in different cultures and traditions, rooted in ancient civilization, that bind all nations together despite the variety of beliefs and religions across our planet.

It is incumbent upon us to honor the gift of life and keep the spirit of collectiveness in the light of peace, friendship, and love at the time of Yalda and Christmas.

It invites us to truly celebrate the birth of the sun, leaving darkness and evil behind in order to retain the essence of appreciation, empathy, generosity, and forgiveness alive throughout the year.

As one of the greatest Persian poets, Hafez said:

“Anyone who is touched by God’s grace can do what Christ did, without fail.”

For more images of Yalda visit www.amirinia.com/yalda/ or click here.