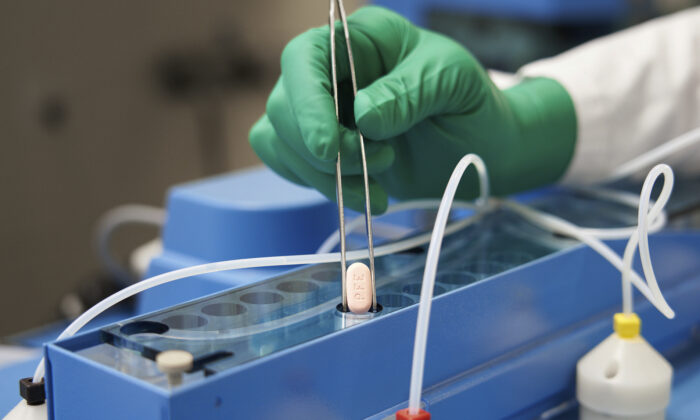 A Pfizer technician handles the company's COVID-19 pill, known as Paxlovid, in a file photograph. (Pfizer via AP)
Covid News

People who take Pfizer’s COVID-19 pill may experience symptoms of the disease afterward, the Centers for Disease Control and Prevention (CDC) said on May 24.

A rebound of symptoms “has been reported to occur between 2 and 8 days after initial recovery,” the CDC said in an alert to healthcare providers. People who took the pill either experience symptoms or test positive for COVID-19 after having tested negative.

The agency is still recommending the pill, Paxlovid, for the treatment of mild to moderate COVID-19 among people deemed at high risk of progressing to severe disease, claiming the rebound of symptoms may be unrelated to the pill.

“A brief return of symptoms may be part of the natural history of SARS-CoV-2 (the virus that causes COVID-19) infection in some persons, independent of treatment with Paxlovid and regardless of vaccination status,” it said.

The Food and Drug Administration (FDA), which authorized paxlovid in late 2021, told The Epoch Times earlier in May that it was investigating reports of relapses among people who took the pill.

Regulators “will share recommendations if appropriate,” an agency spokesperson said in an email.

A number of people who received the pill have reported experiencing symptoms after appearing to recover. A handful of cases have been reported as case studies.

Regulators noted in their evaluation of Paxlovid that several participants in Pfizer’s clinical trial “appeared to have a rebound” in viral load five to nine days after completing their treatment courses. After the reports of rebounds post-authorization, additional analyses of the trial data showed that 1 to 2 percent of patients tested positive after testing negative or had a higher viral load after completing the treatment, the FDA said on May 4.

National Institutes of Health (NIH) scientists are working with the CDC and the FDA to figure out “possible ways to better understand this phenomenon,” an official at the agency told The Epoch Times in an email.

“NIH currently does not have studies underway, but the agency is actively discussing potential studies to learn more about who this is affecting, how often it is occurring and if a longer regimen would be more effective in certain cases,” the official said.