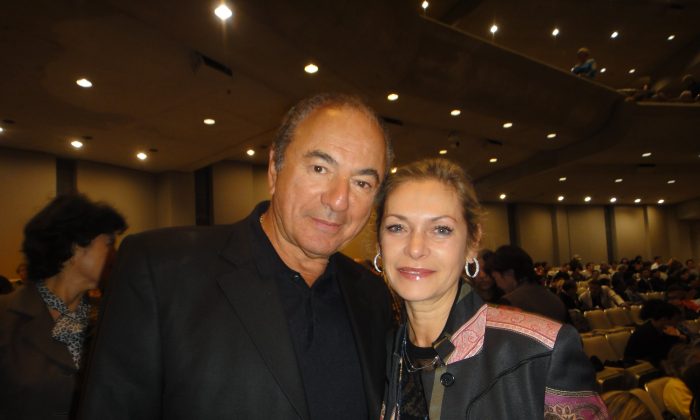 TORONTO—Solomon Tencer and Nadia Veselova-Tencer are Canadian leaders in ballet theatre who for many years have put on world-class productions at some of the most prestigious venues in the world.

On Saturday afternoon, the couple was among the appreciative audience at Roy Thomson Hall, attending the opening performance of the Shen Yun Symphony Orchestra’s 2015 North American tour.

And they were mesmerized.

“I enjoyed it very much. It has beautiful musicians and a full orchestra, which is great to see. It is not so often you can see such a—I would say—marvellous work,” she said.

That is high praise coming from a seasoned artistic director, choreographer, dancer, and award-winning master dance teacher like Ms. Veselova-Tencer. A graduate of the leading Kirov Ballet Academy in St. Petersburg, Russia, she is also the artistic director of the annual international ballet gala Stars of the 21st Century.

The gala, established in Toronto in 1993, showcases dancers from the world’s premier ballet companies and has graced renowned stages around the globe.

“Beautiful, beautiful,” she said about the music.

Based in New York, Shen Yun is a world-renowned classical Chinese dance and music company that visits some 100 cities each year on a global tour. The company’s symphony orchestra also tours on its own, and the Toronto performance on Saturday, Oct. 3, was the opening show of its 2015 North American tour.

Offering a unique combination of classical Western instruments with traditional Chinese instruments, in the words of Shen Yun’s website the orchestra “blends the spirit of Chinese music with the power of a Western orchestra.”

“It’s a beautiful concert. We’d like to thank the company that they came to Toronto and gave us this opportunity to come and visit and listen,” said Mr. Tencer.

As the producer of Stars of the 21st Century, Mr. Tencer has worked with some of the world’s biggest names, including Luciano Pavarotti. He said it was his first time attending a concert by the Shen Yun Symphony Orchestra, but he wanted others to know how much he enjoyed it and to encourage more people to come to experience the performance.

“It’s a full orchestra, which today is very rare, and the conductor is very good. The girl who played the violin—fabulous, [and] the tenor and soprano were very nice.”

“It’s absolutely fantastic. I loved it, and I would like to hear more of it,” she said.

“It’s amazing for the whole public in Toronto to be introduced to such beautiful instruments,” she added. “It’s a lovely sound.”