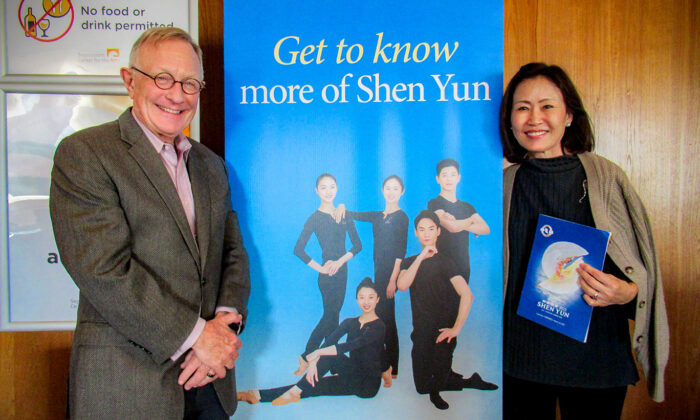 Congresswoman Michelle Steel (R-Calif.) and husband Shawn Steel at Segerstrom Center for the Arts on May 22, 2022. (Linda Jiang/The Epoch Times)

COSTA MESA, Calif.—Michelle Steel, Republican congresswoman for California’s 48th congressional district, was thrilled by Shen Yun Performing Arts at Segerstrom Center for the Arts on May 22.

Mrs. Steel is one of the first Korean-American women to serve in Congress. As a young adult, she came to America searching for opportunities in the hope of a better future.

“It’s fabulous … every year I see it,” she said of Shen Yun. “The costumes, culture, and those dancing moves, it’s just amazing!”

Recently appointed to the Congressional-Executive Commission on China, which monitors human rights and rule-of-law developments, Mrs. Steel was glad that Shen Yun is highlighting, through song and dance, some of the atrocities currently happening in China.

“I am very happy that they are actually talking about what’s going on in the whole world—especially in China … so I just loved every bit of it,” she said.

Based in New York, Shen Yun is the world’s premier classical Chinese dance company. With a mission to revive China’s 5,000-year-old culture, the company presents folk dances, solo performances, and story-based pieces that tell tales from ancient times to the modern day. The company’s website says its performance this year demonstrates “China before communism.”

In addition to ancient heroes and legends, Shen Yun presents mini-dramas that depict the persecution of Falun Dafa, a meditation discipline based on the principles of truthfulness, compassion, and tolerance. In 1999 the Chinese Communist Party (CCP) launched a persecution campaign against the spiritual practice and adherents have since been subjected to unprecedented imprisonment, torture, and abuse.

Mrs. Steel said she supported how the performances stood up to the CCP, something that she herself has done with one example being her efforts regarding the 2022 Olympic Games held in Beijing.

According to The Epoch Times, a letter from Mrs. Steel and Mr. Cruz was sent out on March 19 and addressed to the Olympic Committee President Thomas Bach. The letter argued that the goal of the Olympics to promote “a peaceful society concerned with the preservation of human dignity” contradicted the evidential and violent repression of dissenting minorities in China by the CCP.

Mrs. Steel then sent a letter to 17 different American corporate sponsors of the 2022 Olympic Games in Beijing to use their advertisements to showcase the CCP’s human rights abuses.

“I said, ‘Why don’t you just spend a little bit of your advertising money to let the whole world know what kind of human rights violation the CCP has been doing?’ Not even one company responded. And it’s just so sad to see how far they can go,” she said.

Advocating for human rights nationally and internationally, Mrs. Steel and her husband Shawn Steel, who serves on the Republican National Committee, have been doing work to help end the crime of forced organ harvesting in China.

A mini-drama from this year’s Shen Yun illustrates how organ harvesting is part of the CCP’s persecution of Falun Dafa. That scene, Mrs. Steel commented, made the most impact on her.

“My husband and I fought … organ harvesting. We tried to stop that. And we want the world to know what the Chinese government is doing. So that really hit me,” she said.