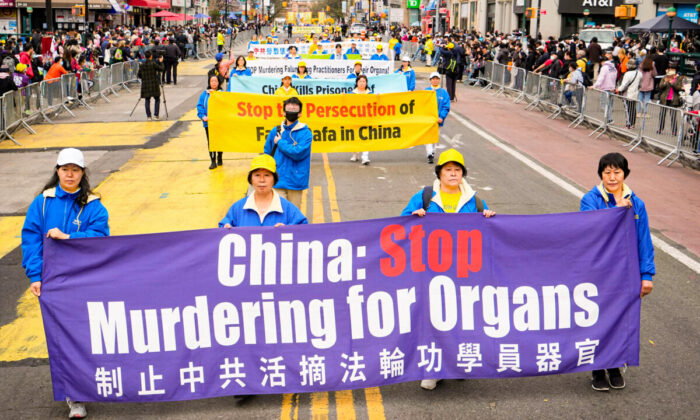 The European Parliament has adopted a resolution voicing “serious concerns” about the Chinese regime’s ongoing forced organ harvesting, while calling on its member states to publicly condemn the abuse.

“Parliament expresses serious concern about reports of persistent, systematic, inhumane and state-sanctioned organ harvesting from prisoners in China, and more specifically from Falun Gong practitioners,” reads a statement dated May 5 following the adoption of the text.

The Parliament members “consider that the practice of organ harvesting from living prisoners on death row and prisoners of conscience in China may amount to crimes against humanity,” it reads.

A 2019 independent panel, called the China Tribunal, found that the Chinese regime had for years been killing prisoners of conscience for their organs for transplant on a substantial scale, a practice that’s still going on. It concluded that such actions amounted to crimes against humanity and that the main victims were detained Falun Gong practitioners.

Falun Gong is a spiritual practice consisting of meditative exercises and moral teachings based on the principles of truthfulness, compassion, and tolerance. In 1999, adherents became the target of a sweeping persecution campaign by Beijing after the practice’s vast popularity was perceived as a threat to the communist regime’s authoritarian control on society. Millions of detained Falun Gong practitioners around the country were essentially turned into a large involuntary organ bank for the Chinese regime’s hungry organ transplant system.

Since reports of forced organ harvesting first emerged in the mid-2000s, the Chinese regime has repeatedly denied the allegations but has also refused outside access to medical and detention facilities to verify its claims.

The EU resolution noted that the regime refused to testify before the China Tribunal.

The resolution further denounced the lack of independent oversight on whether detainees had given consent to organ donation, and the Chinese authorities’ silence on reports that families were being prevented from claiming the bodies of loved ones who died in detention.

The four-page resolution, adopted by a show of hands on May 5, was the first public statement from the European Union on the issue since 2013, when the European Parliament first put Beijing on notice that the practice of forced organ harvesting was unacceptable.

Besides condemning the abuse in public, the resolution said, the EU and its member states should raise the organ harvesting issue “at every Human Rights Dialogue,” raise the issue in engaging with partners, and take necessary actions to prevent their citizens from participating in transplant tourism to China. Relevant institutions, it said, should reconsider their collaboration with Chinese counterparts on transplant medicine, research, and training.

Human Rights ‘Not an Option’

The passage of the resolution came ahead of U.N. High Commissioner for Human Rights Michelle Bachelet’s planned trip to China, and the European Parliament in the resolution urged the human rights body to investigate the issue during the visit.

“Respect for human rights is not an option, but a requirement in all areas, including in the challenging medical and ethical area of organ donation and transplantation,” he said in prepared remarks delivered by Jutta Urpilainen, commissioner for international partnerships, on his behalf, according to the parliament’s press office.

An April medical study published in the American Journal of Transplantation identified dozens of Chinese publications where physicians took out the hearts and lungs from people for transplant without following the standard protocol for establishing brain death. This effectively meant that patients were killed for their organs and that the hundreds of medical professionals involved were acting as “executioners” for the state, the authors said.

Borrell’s speech was applauded by U.S. Rep. Gus Bilirakis (R-Fla.), who serves as the co-chairman of the International Religious Freedom Congressional Caucus.

“China’s abominable human rights record, including the inhumane practice of organ harvesting of ethnic and religious minorities, will no longer be swept under the rug,” he told The Epoch Times. “It is imperative that the United States and her allies send a strong and unwavering message in defense of basic human rights and protections for all people.”

Others believe the measure is still far from solving the problem.

“Three years have passed since the China Tribunal concluded that China is killing people for their organs. For over two decades China has persecuted Falun Gong practitioners and probably killed over a million of them, probably more than [the fatalities] in Ukraine up to today,” he told The Epoch Times.

Compared to the world’s response to the war in Ukraine, the resolution has been “a feeble call to a communist regime that backs up Russia in its aggression,” he said.

“We need actions on China, not calls. China heard these calls for two decades and ignored them,” he said.

“At this point, Europe is being challenged by the CCP: Will Europe make basic human rights and values a non-negotiable condition for partnership, or ignore the gruesome practice of forced organ harvesting from living Falun Gong practitioners in China?”