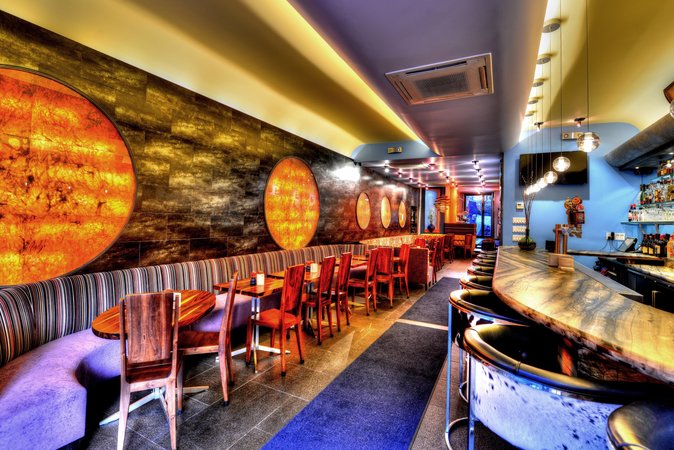 Bustan's dining room. In the back is also an inviting garden. (Courtesy of Bustan)
Food

When I first heard about Bustan (“garden” in Aramaic, Arabic, and Hebrew), I thought it was a new addition to Al Bustan, the Lebanese restaurant. No, I was told, it is not; and also, that they use a “tabun” oven (used in Middle Eastern baking).

Having lived in the Middle East, I was intrigued. My mind raced back to the traditional cooking from Biblical times that you would find in the old city of Jerusalem or Palestinian villages or in the villages of Jordan, Lebanon, Syria, Iraq, and parts of North Africa.

Most of the best traditional dishes of that region come from the tabun.

My curiosity was even more piqued when I learned that Bustan serves new Israeli food.

A Recent Concept
The foods and ingredients brought by Jews from all parts of the world who came to settle in Israel, created a culinary landscape of dishes rich with flavors and spices of the Mediterranean and the Middle East.

But it is still in the experimental stage and it is continuously evolving, not unlike how New American cuisine and other popular cuisines took ages to develop their own personalities.

This is what chef and partner Efi Nahon, who previously worked at Barbounia and Taboon, is trying to create at Bustan.

As you navigate the elegant menu you will see eclectic dishes that are familiar with some interesting twists.

I was attracted to the unusual creation of Charred Octopus with warm white bean masabaha, crushed tomatoes, green harissa, and botargo ($18). It was quite satisfying with tender octopus meat, charred by the fires of the tabun.

The stuffed kibbeh with tahini sauce made with herbs from Nablus was another attraction. The flavor was good but I wished the kibbeh had a better crust and had been placed next to the tahini sauce rather in the middle of it.

One instance where the twists took away from the dish was in the unusual version of the mujaddara, traditionally prepared with rice and lentils. Here the rice was replaced with freekeh, cracked green wheat.

To my dismay, it was undercooked, tasteless, and most likely all ingredients thrown in the pot all at once.

The trick to mujadara is that the ingredients should be cooked in sequence, starting with the lentils with cumin, then the rice, and finished with olive oil and fried crispy onions.

The flatbreads from the tabun are offered with unusual toppings such as cured tuna, with za’atar (thyme mixed with salt, sumac, and sesame seeds), red onion, feta, spinach, and fresh tomato ($15); and ground lamb with tomato, tahini, pine nuts, sumac, and pickled onions ($15).

From the main menu we ordered two of chef’s signature dishes, which were both satisfying and pleasing. I loved the whole baked fish, which took me back to the shore of the Greek Islands: whole branzino baked in the tabun ($34), drizzled with special olive oil from a little Palestinian village.

The Lamb Terracotta ($27) was reminiscent of a Moroccan dish, prepared with ground lamb mixed with about 20 different spices and vegetables with tahini and baked in a flaky bread dome. It was well done and flavorful, but I could not fathom the addition of tahini in this dish.

Signature cocktails ($9–$15), prepared by award-winning sommelier Guy Goldstein, have distinctly Mediterranean flavors, such as apricot, fig, lavender, and pomegranate, and complement the dishes.

As for dessert, the kunafa is a must. It was one of the best I’ve had in New York.

The interior was a broad spectrum of a Mediterranean color palette of sea and earth tones in hues of blue and sienna. It has a lounge-like feel. On a nice summer night, guests can enjoy al fresco dining in an inviting garden in the back, Mediterranean style.