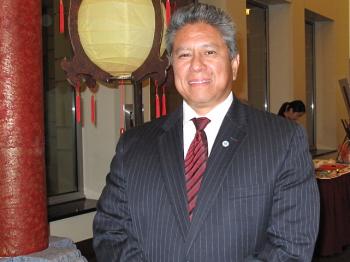 By Epoch Times Staff
Print
PASADENA, Calif.—Javier Valenzuela, a partner in an investment firm, was at the Pasadena Civic Auditorium Thursday evening, April 28, with fellow Rotarian, Mr. Ho, who had invited him to the opening night of Shen Yun Performing Arts New York Company, the internationally-acclaimed classical Chinese dance and music company performing in Pasadena for four nights as part of its 2011 World Tour.

Mr. Valenzuela decided to research the show after accepting the invitation. He said, “I had no idea the show was even in town. I looked it up online and said, ‘Oh, this looks like a great event.’” He was also interested in the performers origins, many of them are originally from Taiwan or China and grew up in the West.

Mr. Valenzuela said really enjoyed the performance. "It was a great show, and it exceeded my expectations. I enjoyed the costumes, the dancing, the singing, it was very well done. Excellent show,” he said.

He described one of the dances: “I personally enjoyed the plum blossoms, with the little fans. That was very beautiful. The choreography was excellent. I really enjoyed it.” The Plum Blossom dance is often mentioned by audience members as a very memorable performance.

The emcees speak in both English and Chinese, each program of the Shen Yun performance is given a brief introduction. This, with additional streaming lyrics for the vocal performances on the backdrop, makes the show understandable to any audience. Mr. Valenzuela said, “Most of them I understood, with the writing on the backdrop. Good values, good versus evil, hard work, you’ll succeed if you work hard. Truths that every culture holds true.”

Mr. Valenzuela added how the message of the show was universal. “All the concepts were very familiar, even though it was Chinese. I’m American, but my family is from Mexico, Mexican American. I think it’s all very similar, growing up and learning basic values, universal truth. I understood it and I think everyone could understand it. No question about that.”

The show is good for anyone he said. “Very positive. Everybody in the theater was excited about the show, the singing, the choreography, a good positive environment. Good for children too, good for families.”

He concluded by saying, “It was a great show and I would recommend it to friends. I’ll definitely come back, there’s no question.”