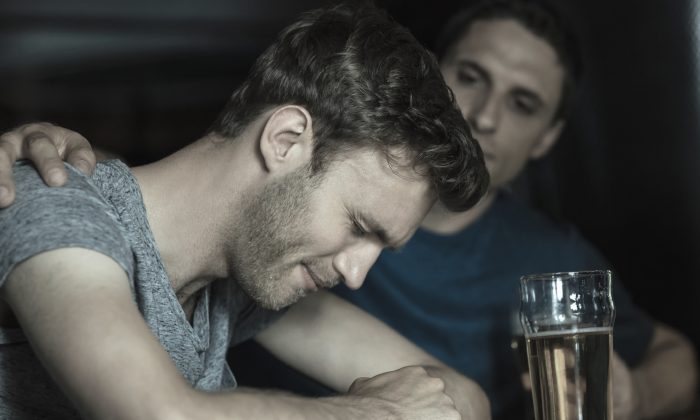 ‘Bromances’ May Help Guys Recover From a Bad Day

Male bonding may be a great way for guys to lower stress levels after a bad day, researchers say.

When they studied male rats housed in the same cage, they found that mild stress can actually make male rats more social and cooperative than they are in an unstressed environment.

The stressed rats showed increased levels of oxytocin, a hormone that helps people bond and cope with stress. The rats also huddled and touched more.

Having friends is not un-masculine.

“A bromance can be a good thing,” says lead author Elizabeth Kirby, who started work on the study while a doctoral student at University of California, Berkeley, and continued it after assuming a postdoctoral fellowship at Stanford University.

“Males are getting a bad rap when you look at animal models of social interactions, because they are assumed to be instinctively aggressive. But even rats can have a good cuddle—essentially a male-male bromance—to help recover from a bad day.

“Having friends is not un-masculine. These rats are using their rat friendships to recover from what would otherwise be a negative experience. If rats can do it, men can do it too. And they definitely are, they just don’t get as much credit in the research for that.”

After severe, potentially life-threatening stress, the male rat cagemates became withdrawn and antisocial, often sitting alone in a corner, and also became more aggressive, not unlike people who suffer from PTSD or illnesses such as depression or severe anxiety. Oxytocin receptor levels in the brain actually decreased after severe stress, which would make the brain less responsive to whatever hormone is there.

“Social interactions can buffer you against stress, but if a trauma is just too much and there is PTSD, you actually withdraw from social interactions that can be supportive for you,” Kaufer says. “This research suggests that this might be happening through changes in oxytocin; that in the context of life-threatening stress, you lose its effect and you see less prosocial behavior. This really aligns well with what you see with pathological effects of stress on humans.”

The work supports attempts to treat PTSD with oxytocin nasal sprays as a way to encourage social interactions that could lead to recovery. Oxytocin may also help those suffering from PTSD replace traumatic memories with less traumatic memories, so-called fear extinction.

“We think oxytocin, which is released after stress, is a way of bringing people closer in times of acute stress, which leads to more sharing, bonding, and potentially better fear extinction and an increase in cognitive health,” says first author and graduate student Sandra Muroy.

Kaufer and Kirby study the impact of stress on the brain, and previously have shown that moderate stress primes the brain to better deal with subsequent stress, even stimulating the growth of new neurons to remember the stressful situation.

This research led them to study the effect of stress on social behavior, and how brain hormones and neural circuits are changed by stress to alter social dynamics. Kirby and Muroy focused over the past two years on male rats after noticing the effects of mild stress on cagemate interactions. They correlated these with oxytocin levels in the brain’s hypothalamus, because of oxytocin’s known role in social bonding, including male-female pair bonding and a mother’s bonding with a child.

No Pushing and Shoving

Male rats housed together sometimes display aggression toward one another, such as fighting over water and food, Kirby says. But after a mild stress—in this experiment, restraining them for a few hours—they tended to cooperate more, despite or because of an even stronger dominance hierarchy between the rats.

“If you repeatedly take away and return their water, normal rats become very aggressive, pushing and shoving at the water fountain like a bunch of thirsty 7-year-olds who don’t know how to stand in line yet,” Kirby says. “The cagemates who had the mild stressor did not show this behavior at all. After taking away their water and bringing it back, they shared it very evenly and without any pushing and shoving. It was very civil.”

The researchers found that this was accompanied by increased hypothalamic oxytocin levels. On the other hand, a severe stressor—in this case, adding the smell of fox urine while they were restrained—had the opposite effect.

“If you are a rat and you smell a predator, the likelihood that you are going to get eaten soon is pretty high,” Kirby says. “In that case, the oxytocin bump that would come with a less threatening stressor is suppressed, and oxytocin receptor levels decrease Then, you don’t see social bonding anymore. You don’t see the rodent cuddling, you don’t see them showing increased prosocial behaviors.”

Stress should be seen less as a trial to survive than as a stimulus for greater social bonding.

This is akin to PTSD after a battle experience or a car accident, she says. “People stop talking to their friends, they stop engaging in their social networks the way they used to.”

“A tiny little difference in the reality of the experiment—the switch from a neutral odor to a predator odor—caused a major change in these animals’ behavior: they don’t have any of the prosocial bonding, they don’t share resources in a nice way, they don’t have a pronounced hierarchy, they don’t huddle or bond, and you start seeing aggression,” Kaufer says. “And when you look in the brain, they don’t have an increase in oxytocin gene expression or the hormone itself, and they have a decrease in the oxytocin receptor.”

These and other experiments demonstrate that stress should be seen less as a trial to survive than as a stimulus for greater social bonding and, by changing our day-to-day lives, a long-term benefit to mental health and increased stress resilience.