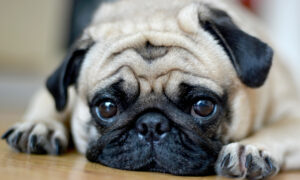 Wedding photographer Rosie Hardy was in the middle of her first photo-shoot of spring when one of the bridesmaids suddenly jumped into the lake.

She had jumped to save two goslings, who were being drowned by an adult black swan.

“Just as we were about to start shooting, we heard this awful squawking coming from some geese a few feet away,” Hardy told ABC News. “[I] saw a big black swan lunge at one of their two goslings and start trying to drown it.”

That’s when Faye West plunged into the lake.

“It was incredible, though everyone did go into a few moments of shock,” Hardy said, “as a bridesmaid in a lake isn’t usually a good sign!”

West was able to retrieve the goslings and return them to their parents.

“As she came to shore and returned the shaken little gosling, everyone cheered and we continued on with the portraits,” Hardy said, “not before the two geese let out two mighty honks of appreciation though!”

Hardy was able to take pictures of West getting into the lake and after the ordeal.

“Faith in humanity: restored. What a hero!” Hardy wrote.