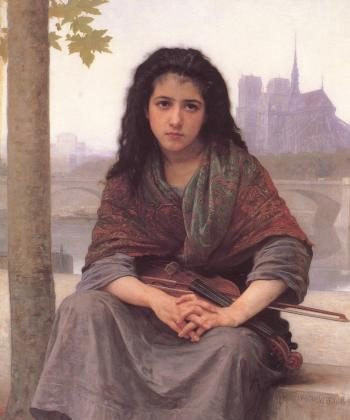 NEW YORK—People love to look at people. We are drawn to faces. So, naturally, in both Eastern and Western art, portraiture has played an important role and was the first to mature.

Classical painting and religious themes are closely tied. The earliest classical art adorned sacred spaces. People in ancient times believed that gods created people using their own images, and statutes and images of gods were created based on human images.

Realism reached its pinnacle during the Renaissance. Artists perfected the human form to depict gods. The figures expressed mankind's admiration for gods and what was most solemn and compassionate. Since humans were created by gods, and are the most perfect creature in the world, artists used the perfect human body to explore and advance their art.

Portraiture developed over time, but its resemblance and adherence to reality varied depending on the era and region. Florentine artists used the technique of sketching to draw structures, while Venetian artists focused on color. As portrait size increased, artists simplified their methods. Painting strokes were less detailed than earlier oil paintings on wooden boards.

The Neoclassic period that followed the Renaissance reach another peak of portraiture. The figures painted by Jacques-Louis David were not only vivid and clear, but also showed human dignity and morality. Romantic artists, on the other hand, weren’t as strict about the structure of the human body or brush strokes as the Neoclassic artists. This also showed a difference in tastes depending on the era and basic training.

Though backed by a systematic academic education, classical art has always been challenged by a descending moral level and social taste. Nineteenth century French painter William Adolphe Bouguereau never stepped away from the classical academic style.

He sharply criticized Impressionism in its apparently unfinished look. "One has to seek Beauty and Truth, Sir!” said he. “As I always say to my pupils, you have to work to the finish.”

Like other classical artists who were celebrated in their time, such as England's Frederic Leighton and Lawrence Alma-Tadema of Holland, Bouguereau is dismissed today as conservative and old school. In fact, the artist made remarkable technical breakthroughs, especially in depicting the clear fine texture of the skin of women and children.

His painting “Bohémienne” shows the gentle beauty of a young gypsy without giving up detail. His figures are often very touching with their beautiful, pure and vivid expressions.

However, the artists of his generation, although gifted in presenting beauty, could not express deep spiritual values or power. This era of realistic portraiture did not reach the heights it could have.
In traditional realistic works, the human figure was the soul of the painting. Whether the human figures conveyed the spirit and were realistic directly affected whether the paintings were successful. Successful portraits often touch people’s hearts far better than words.

Everyone can enjoy traditional art when it displays pure kindness and beauty. Because it presents the universal value and eternal standard of human kindness, the passing of time cannot diminish its value.
Fine art greatly affects human culture. That may not be apparent in the U.S. today because so-called fine art in galleries does not portray the essential characteristics of great art. This rather degenerated art actually reflects declining morality.

Today's art reflects diversity and dazzles the eye. Yet, one wonders if this art really touches the viewer. How can it possibly change a society?  In a very real way artists can actually halt this decline.

The Chinese International Figure Painting Competition is one of a series of world cultural and art events sponsored by New Tang Dynasty Television (NTDTV). The competition will award  figure paintings that express traditional Chinese virtues and values using techniques of classical Western realism. NTDTV extends the sincere wish that artists with dreams and vision will use the competition to create great art for history.