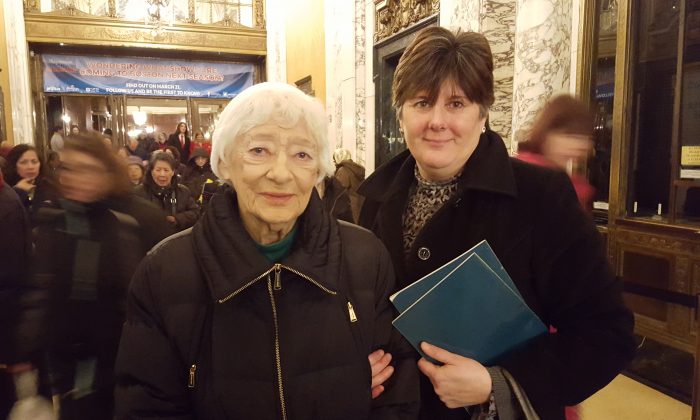 Patricia Hagan and her daughter Beth Newcomb said Shen Yun Performing Arts was a life experience everyone should have. They attended Shen Yun’s last performance on Jan. 24 at the Boston Opera House. (Catherine Yang/Epoch Times)

“She said for Christmas, don’t get her presents because she has enough things at this age. She wanted experiences, and this is what she wanted as a life experience,” her daughter Beth Newcomb said.

So the mother and daughter caught the last of four Boston performances on Jan. 24 at the Boston Opera House. The experience was, in a word, astounding for Ms. Hagan.

Nearly 90 and retired from running her own business, Ms. Hagan was so moved by the performance she leaned in to say, “I’m hoping I live long enough to see it again next year—and several years more.”

“Everybody should have the experience to come see this,” Ms. Hagan said.

The depth of 5,000 years of China’s divinely inspired culture was filtered through the perspectives of many different audience members. Each seemed to feel the performance speak to them on a uniquely individual level.

Bette Panagoulis, a psychotherapist, was brought to tears by the healing she felt through the performance.

Many of Shen Yun’s classical Chinese dance pieces tell stories—vignettes from China’s illustrious history. Ms. Panagoulis named a couple that had made her so unexpectedly emotional. Through these performances, she felt she was really able to experience what these characters were going through.

In one dance, an elderly couple in present-day China are persecuted for practicing the spiritual meditation Falun Dafa, also known as Falun Gong. But as they are steadfast in their faith, a divine miracle unfolds.

“That was it, too, the healing part coming through it—the healing process,” Ms. Panagoulis said. She said she felt these experiences and emotions come through the performance.

Passing by, audience member Nancy Field jumped in to agree. She felt the performance was full of feeling and had gotten emotional: “There’s a lot of feeling in it, right from the beginning.” “I don’t even know why.” She said she felt both sadness and happiness from being able to experience the history.

It just turned on every sense you have.
— Brad Field

Her husband, Brad, said the performance was enlightening and vibrant. “It just turned on every sense you have. It lit everything right up.”

Photographer Richard Osburn was especially enamored with the visuals and half jokingly and half regretfully commented that it was a shame he could not take photos of the performance.

With the use of colors, blocking, and a digital backdrop that gave depth to the scenes, the staging was just incredible, he said. There was much to learn, and it seemed every movement had a meaning, even if he did not fully understand its cultural meaning.

“Oh my, it really draws you in quite a bit,” Mr. Osburn said.

His wife, Marilyn Osburn, a retired counselor, said it was both fascinating to see the culture, but sad knowing that those in China today aren’t able to experience it, and the traditional culture is being lost.

“I just felt it very moving and very emotional … just the fact that it’s there and it’s history and it’s been here longer than we are and possibly because of this performance, it’ll be here long after we’re gone,” Mrs. Osburn said. “It’s important that this lives on.”

Shen Yun was formed by artists in 2006 to do exactly that: revive the traditional culture that was once nearly lost. This culture had been passed down continuously for 5,000 years, but was almost completely destroyed under communist rule.

The communist regime, officially atheist, has launched several campaigns in modern history to uproot the traditional culture that emphasizes values like respect for the heavens. Along with moral values, beliefs, art forms, and traditional structures like the temples around China, the culture nearly lost its heart and soul. Thus, to many in the West, forms like the classical Chinese dance Shen Yun performs are virtually unknown.

Pauline Pynn knew nothing about Shen Yun or its mission until she ran into a woman at a Shen Yun booth in a mall. She ended up in conversation for nearly an hour and thought that seeing Shen Yun would be a lovely outing for her and her mother.

It was nothing like anything else she’d ever seen and brought a really peaceful feeling, said Ms. Pynn, a business owner. It was nice to see and be able to learn about this vast culture, but also almost ironic that so much of it is something most people don’t know about, she said.

Ms. Pynn’s mother, Shirley O’Brien, strongly supported Shen Yun’s mission and was appreciative that the performance helped bring light to issues like the persecution of Falun Gong going on in China today.

“I felt like we should do something about that,” Ms. O’Brien said. She thought it was important that “people live according to their heart” and the world should not accept the behavior of the Chinese regime.

Ms. Pynn agreed: “It’s teaching us not to accept that in life.” Instead, the performance showed a positive message for her.