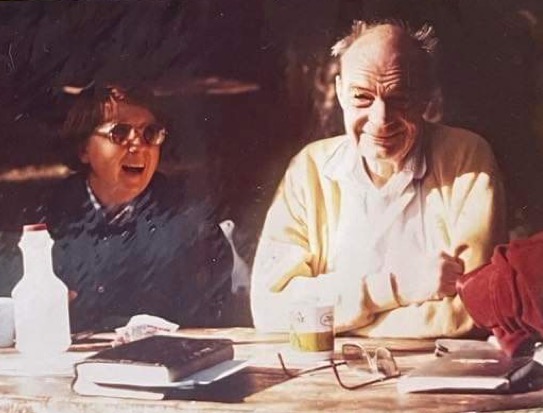 Wally Carr is pictured here at a picnic with his friend and mentor Elizabeth Ivey, Director of Life Adventure Camp in Lexington, Kentucky.(Courtesy of Claude E. Hammond)
Books

Book Review: ‘Wednesdays With Wally: Adventures With the Old Man From the All-Night Restaurant’ (2021)

I recently had lunch with a group of lady friends. We all know each other, mostly from current or past work relationships.

We’re comfortable together. There are no strangers among us. And, bottom line, we’re pretty much all cut from the same cloth when it comes to what piques our interests and animates our conversations. Our group shares the rewards of our connectedness with little to no risk involved. We share mutual trust.

When I first learned of author Claude Hammond’s “Wednesdays With Wally” and the gist of the book, I grew curious. I knew it to be a true account of an elderly man, Wally, whom the author befriended in the last decade of Wally’s life.

As I got into the book, I wasn’t disappointed: What an unexpected gift I was unwrapping. I discovered a read that not only shares an engaging and heartfelt story but also carries with the narrative an underlying inspirational message, perhaps of how to live a loving life.

Claude’s outreach, his decision to connect with Wally, was out of his comfort zone. I suspect it would be way out of all of our comfort zones. In this instance, Claude’s radical kindness and hospitality went beyond the boundaries of sharing a smile with a stranger. He took it much further, ultimately giving of his time and talents over the course of many years.

The story begins in the late 1950s and takes place in Lexington, Kentucky, principally hovering around the University of Kentucky campus and its nearby environs.

William Wallace “Wally” Carr was one of the recognizable but easily ignored characters, who was most often seen shuffling the streets, disheveled and with his head down. He looked like and was treated as a street person. He was fond of walking and fond of visiting libraries. He was also struggling with mental illness, on and off medications, and frequently prone to losing or giving away his modest funds.

Wally rarely spoke to people he didn’t know, and most had little or nothing to do with him. He might be seen occasionally at a local diner or at the Maxwell Street Presbyterian Church.

His story was locked away, blurred by years of isolation and personal tragedies. Beneath the layers of soiled clothes was a brilliant, sensitive man with degrees from Colby College, Teachers College at Columbia University, and the Royal Friedrich Wilhelm University of Berlin. His father was a noted American classicist, Dr. Wilbert Lester Carr. Wally was fluent in Latin and German. He liked to quote Shakespeare and refer to Greek and Roman philosophers.

Out of the Shadows

All of this and more would be discovered when the young, soon-to-graduate college student Claude Hammond agreed to visit Wally on a weekly basis. While he had seen Wally on campus, he didn’t officially meet him until he was asked to help by a small group of local advocates, most notably an enthusiastic social worker.

Hammond is frank in describing his initial reluctance to become essentially a caregiver to an aging man, but that attitude soon changed. Both men, differing in ages and backgrounds, became friends. They truly enjoyed one another’s company.

Readers will find themselves rooting for Wally, cheering when he is placed in a new housing situation, when a gentle guardian takes charge so that his money doesn’t disappear, when he has a good meal, and when he grows comfortable conversing with his new, young friend.

Together they go to the horse races, share dinners, attend lectures, go for walks, and often find themselves in comical situations.

We learn that Wally’s home in the Christ Church Apartments is accessible through the main lobby where the “lounge ladies” hover, ever eager to engage in gossip and always glad to see Claude when he comes to visit Wally. One Halloween, Wally dons a sheet and attends the costume party as Julius Caesar’s ghost. He dances with “all the witches” and a grand time is had by all.

There are many chapters to Wally’s life that are revealed over the course of their decade-long friendship. There’s the time he spent studying in Berlin when Hitler was ascending to power, there’s his royal friends, and there’s the time spent in a psychiatric ward in New York. There’s the death of his parents and his time as a tutor to a notable family in New Orleans.

A writer and editor, Hammond researched Wally’s claims, sometimes wondering if they were delusional; this wasn’t the case. He is often pleasantly surprised at the depth and breadth of his sage friend.

Wally was a lifelong learner enrolling and reenrolling in college courses, mostly Shakespeare and Latin. The vicissitudes of his circumstances did not squelch his thirst for knowledge.

Throughout, Wally remained grateful. He contemplated his spirituality and relationship to a God that is ever nurturing. He arrived at a place of serenity. Perhaps he was awarded a doctorate in contentedness.

For Claude, his time as apprentice, mentor, and friend is etched in his heart forever as a joyful journey that he took the risk to take.

‘Wednesdays With Wally: Adventures With the Old Man From the All-Night Restaurant’
By Claude E. Hammond
Self-Published, Dec. 22, 2021
Paperback: 267 pages