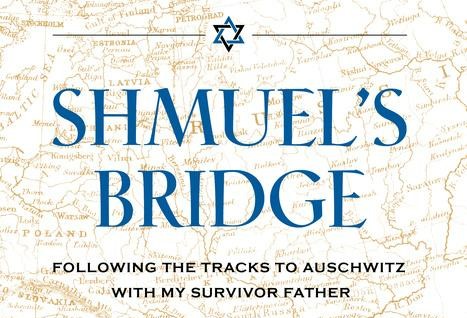 A Holocaust memoir told by poet and son of a survivor.
Books

Book Review: ‘Shmuel’s Bridge: Following the Tracks to Auschwitz With My Survivor Father’

Jason Sommer is an American poet. He has written five collections of poetry. His father is a Holocaust survivor. Many of his family members experienced the Holocaust; many of them did not survive. His “Shmuel’s Bridge” is a memoir of that very subject.

Even in prose, one can tell that Sommer is a poet. His words, sentences, and paragraphs flow smoothly, often elegantly, with imagery and detail that strike the reader in ways that prose typically cannot. The reader is left remembering not just the story but also how it is written.

No, the memoir is not written in stanzas. It is written with traditional sentence structure, filling up chapters. But in many ways, it is still poetry.

Sommer’s poetry has been based on the Holocaust stories that he has heard over the years from his father and other family members. His book reflects deeply on those stories. And he also uses excerpts from his poetry to begin every chapter, adding his own experiences of how the Holocaust has affected him personally―though he was not born until well after World War II.

Those experiences are reflections of his childhood and the task of being the child of a survivor. He reflects on the nightmares, discipline, humility, modesty, brilliance, protection, and anger of his father. These reflections are not merely for the sake of telling the reader what happened, but to explain how the author felt or still feels about those moments.

Sommer begins the book with him showing his father video clips from a trip they took to Auschwitz. He and his father had taken this journey 20 years prior, in search of a specific bridge near the well-known concentration camp. His father now suffers from dementia and enjoys the video clips anew each time. It is this trip that is the basis of the book.

A Journey Through Tragedy

The author brings the reader on the journey of not just the trip but also the planning of it. It is not the first time that his father revisited Auschwitz, but this trip is different. Sommer’s uncle, Shmuel, his father’s youngest brother, was killed on the way to the concentration camp. He was shot by Nazi soldiers after he jumped off the train into a river. It was a bridge that had provided Shmuel the opportunity to nearly escape but, tragically, not to succeed. The focus of the quest is to find the bridge where Shmuel died.

As the two travel and meet various people, including the memorable Russian Volodya, who serves as a guide for much of the trip, Sommer is constantly hounded by thoughts of uncertainty (about how he feels and how he thinks his father feels), doubt (about his role in the trip, and at times his preparation for the journey), and of disconnection from his father. Despite such an intimate journey with his father and such intimate moments shared, there are times, Sommer acknowledges, when he feels separated from his father, as if he still does not quite know his father and that his father still does not quite know him.

Shmuel’s bridge is pivotal to, if not the crux of, the story. But as the book comes to its close, you realize that the bridge they have been looking for is also the one that will connect them.

The memoir is a reflection of the author’s experience reflecting on his father’s experience. Sometimes we connect with the father, but mostly our sole connection is with the son, who feels disconnected from his father even at the moment they locate the bridge.

Numerous times, the author confides to the reader that he would hide behind the camera in certain situations in order to find comfort or, at times, anonymity. Even after the book concludes, the reader is left with a sense of longing, as if that which is resolved still needs resolving.

This by no means is saying that the memoir leaves anything to be desired. It is a powerful, utterly honest, and beautifully written book. The subject, writing style, and imagery draw the readers in and holds them.

The book is a reminder of the height of mankind’s cruelty and barbarity. It is also a reminder that those who survived that barbarity still bare visible and invisible scars. And while the children of those survivors may try, despite the impossibility, to understand their parents, who can truly conceive of such evil and the ability to survive it?

The book is also, and possibly more poignantly, a reminder that reliving something doesn’t necessarily mean moving past it or finding closure. It is simply a reminder that it’s not always about crossing the bridge, but preparing for the fulfillment or lack thereof once you do.