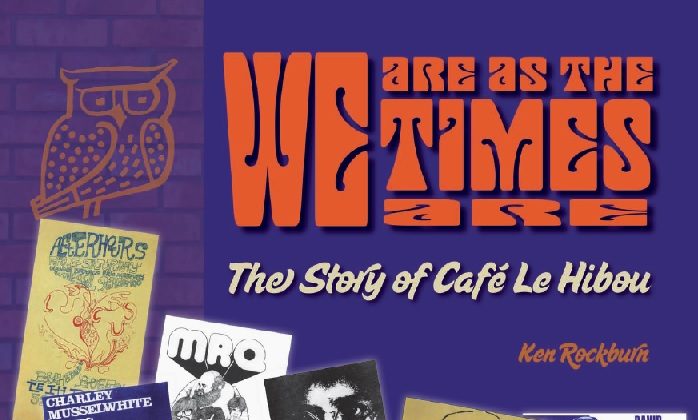 It was where the likes of Gordon Lightfoot, Neil Young, Van Morrison, and Muddy Waters performed to rapt audiences in an intimate setting, where Dan Aykroyd was a regular, and where Jimi Hendrix taped Joni Mitchell’s sets.

Now, Ottawa’s Café Le Hibou, a Canadian arts venue back in the 1960s and ’70s, has been immortalized in a new book by veteran journalist Ken Rockburn.

As a girl in the mid-60s I was fascinated with a psychedelic poster in my older brother’s bedroom. It featured an illustration of American folk singer Tom Rush, who was appearing live at Café Le Hibou. Although I never had the chance to go there, it has always seemed like the coolest place imaginable.

In “We Are as the Times Are: The Story of Café Le Hibou,” Rockburn thoroughly chronicles the history of the legendary club, which operated from 1960-1975 in three Ottawa locations at different times—Rideau St., Bank St., and Sussex Drive.

This book is a labour of love by Rockburn, who was also a patron. It features the perspectives and in-depth first-hand accounts of the café’s owners, performers, employees, and audience members, as well as industry professionals. Rockburn succeeds in conveying the spirit of the times as well as the factual aspects.

“We Are as the Times Are” is chock-full of details of how “the little café that could” survived, sometimes beyond all odds. The valiant struggles of its owners and benefactors to keep things afloat in the name of culture are recounted. The book also illustrates how Le Hibou supported and inspired the arts in Ottawa and far beyond.

The strong graphic design of this large, squarish book is enhanced with the club’s original owl logo, groovy period-style chapter titles, and more than 70 vintage photographs. Posters created by local artists such as Arthur II and Chris Wells are a great addition.

I was familiar with the reputation of Le Hibou as a music venue for folk, blues, jazz, and rock artists of the ’60s and ’70s, but this book held many surprises. I was not aware, for instance, that the club showcased poetry from the outset and held a poetry reading series featuring high-profile Canadian poets like Irving Layton and Gwendolyn McEwen.

Nor did I know that it staged theatre productions, encouraging the talents of teenaged actors such as Luba Goy and Saul Rubinek. Film nights, dance performances, children’s entertainment, and francophone groups were also part of the action. After-hours jams, especially at the Sussex Drive location, were renowned for inspired performances of a wide range of musical styles.

A Place Where the Arts Mattered

The impact of Café Le Hibou was far-reaching and profound. It provided a place where the arts mattered and gave developing local talents a springboard to later and significant accomplishments. The band The Children, for example, included Bruce Cockburn, Sandy Crawley, Bill Hawkins, Richard Patterson, Neville Wells, and David Wiffen.

Rockburn tells us about appearances of soon-to-be-famous Canadian performers such as Gordon Lightfoot, Neil Young, and Murray McLauchlan. Dan Aykroyd was a regular at the café and performed there before he joined the cast of “Saturday Night Live.” And you get the lowdown on Joni Mitchell’s week-long performances, how she dropped acid in a local park, and where she met Graham Nash in Ottawa.

A chapter is dedicated to café regular William Hawkins, a prominent local poet and songwriter who was a bon vivant, mentor, and inspiration to many involved with the local arts scene of the day.

But we also hear about the adventures of Café Le Hibou performers from farther afield, particularly American blues artists like Sonny Terry and Brownie McGhee, Taj Mahal, and Odetta, and from across the pond, a soon-to-be massively famous Van Morrison.

Rockburn goes into great detail about his subject matter. The text is liberally sprinkled with numerous quotations from those who were involved in various aspects of the club. These really add to the book’s interest and credibility. However, although the material is well organized, an index would have been helpful.

If you have an interest in the social and artistic fabric of Canada, this book will appeal to you.  And to find out which one of the Beatles visited Café Le Hibou, or which Canadian prime minister dropped by, you will have to read it yourself!

Joyce MacPhee is a local Ottawa writer and editor.