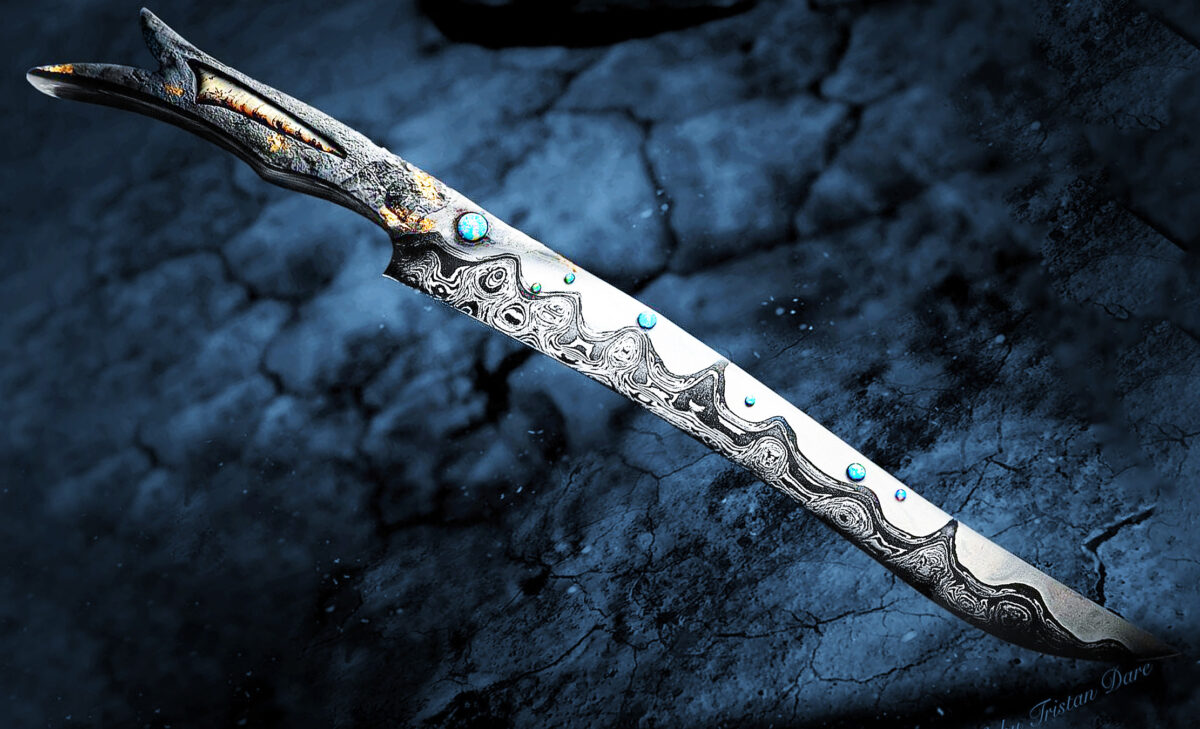 The ancient Egyptians regarded iron as a gift “from the sky,” according to texts dating back to 1300 B.C. The only known source of natural iron in early civilizations was from meteorites. Today, meteorites are still highly prized; and like the ancients who forged the meteorite dagger found among the treasures in Tut’s tomb, modern craftsman carry on the tradition of forging blades made from extraterrestrial space metal.

Dare, 19, is one of these craftsmen. He’s been forging fine knives for the last six or seven years, which steadily grew into a fascination of incorporating precious metals into his pieces. After getting one of his knives, made out of a 4-billion-year-old meteorite, published in “Blade Magazine,” it became a career.

In early 2022, he sourced metal from Muonionalusta, a meteorite that impacted on the border between Sweden and Finland 1 million years ago, and had it shipped to his home in Boise from Germany. At over 4.5 billion years old, Muonionalusta is one of the oldest meteorites ever recorded.

“What makes it so special is that it came from the iron core of a planetoid that collided with some debris nearly 4 billion years ago,” Dare told The Epoch Times. “The planetoid was one of the parent bodies of our solar system, and was completely destroyed as its iron core spewed out as liquid and cooled in space for a very long time. About 1 million years ago, it eventually collided with Earth and found itself scattered across the Swedish tundra. It laid there for four ice ages, until in 1906 it was discovered near the small village of Kitkiöjärvi, where its first pieces were recovered near the Muonio River. That’s where it was studied by scientists in 1910, and found the name ‘Muonionalusta,’ for ‘Muonio’ meaning the river and ‘alusta’ meaning ‘from the beginning.’”

Muonionalusta is one of the most sought-after meteorite metals on Earth, as only around 40 of its fragments are known to exist today. Meteorite metal can get on the pricy side. Although Dare wouldn’t disclose how much he paid for materials for his knife, he admitted “thousands.”

Certain types of meteorites, called octahedrites, have unique patterns within their iron crystalline structures. These ultra-fine patterns form perfect, eight-sided molecular shapes that are mathematically symmetrical. This natural pattern, Dare said, is normally lost when heated to be forged; but he’s found a method of preserving it in his process. “This pattern is seen in all my octahedrite blades, and to my knowledge today less than only 10 people in the world have ever been able to achieve this,” he said.

Deciding on a design, which he called “Nebula,” conceiving a curved shape, he combined Damascus steel to form the knife-edge and meteorite metal for the spine. Damascus steel has an ultra-high carbon content and is both extremely hard and elastic.

Forged at near-melting temperatures — about 2,200 degrees Fahrenheit (1,200 degrees Celsius) — combining black steel with shiny nickel to form “mosaic Damascus,” a stunning decorative water-flowing pattern forms. “After that, I added the meteorite to the bar,” explained Dare. “I forged this into a ‘san-mai’ construction, which basically makes a ‘sandwich’ of steel where the Damascus is in the middle, and the meteorite is the ‘bread.’ This then was forged using the process I made to preserve the pattern, and the bar was forged to the shape of the knife.”

Dare sent the finished blade to a waterjet company to have a small slot cut through the handle, where he set a 20,000-year-old woolly mammoth’s tooth as a decoration. He inlaid several Ethiopian opals along the blade of Nebula to signify stars in the galaxy, and infused 24-karat gold into the surface for aesthetic interest.

Designed as “art for art’s sake,” Nebula’s decoration and curves were intended to make it a collector’s item. But that doesn’t mean it’s useless.

“It is well shaped for work in the kitchen with something such as steaks or any large cuts,” Dare shared. Nebula has a “very sharp and hard edge that will last a very long time.”

But Dare doesn’t intend to keep Nebula for turkey carving next Thanksgiving. It will be sent to Heritage Auctions to be sold next October or November to whoever chooses to own it. “It’s something I want to be passed down for generations to come,” he said, to someone who will “really value the story and magnificence of the materials.”

Other knives forged by Tristan Dare: