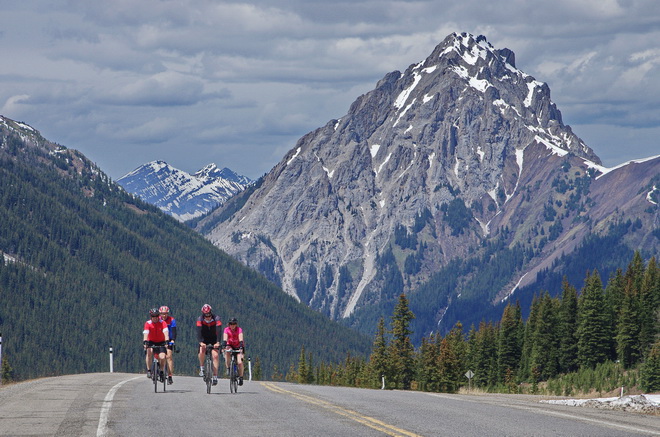 I celebrated my birthday last week by taking the day off and heading with John to Kananaskis Country, Alberta. Our plan for the day was to cycle to Highwood Pass on the highest public road in Canada. We chose to do the more gradual route from the entrance closest to the community of Longview, accessible via a 45 minute drive from Calgary.

This bike ride has been on my wish list for several years. But I’ve always wanted to cycle to the pass during the narrow window when the road is snow free and cars aren’t allowed. There are three weeks at most in a year that you can do that. Starting June 15th cars are allowed.

If you’re not a cyclist – do put the drive on your must do list.

The ideal scenario for this bike ride would be a one way trip where you start at the gate nearest Longview, cycle 37 kilometers to Highwood Pass and then descend 17 kilometers on a road with a much steeper grade to the gate by King Creek. If you were climbing from the King Creek Trailhead, part of the road would be Category 1 – the steepest grade the bikers on the Tour de France climb.

Last year the road was closed once the floods hit. You can see the devastation in many places – but especially at this bridge which washed away. There is still some work happening but from a cyclist’s perspective, the roads are in amazing shape. The roads have been swept and are in better shape than the ones I see in Calgary.

The beauty of doing the bike ride before the cars are allowed on the road is the pure freedom of having the entire road to yourself. It’s absolute bliss.

The road has a wide shoulder so even if you cycle it from now through the summer, there’s never a problem with having enough room to feel safe.

The grade on the road to Highwood Pass, coming from Longview, is generally gentle. There are plenty of occasions where you get a good ride down and it’s really not until you reach Peter Lougheed Park and the last four kilometers that the road steepens.

This article was written by  Leigh McAdam and originally published on HikeBikeTravel.com.Read the original here.