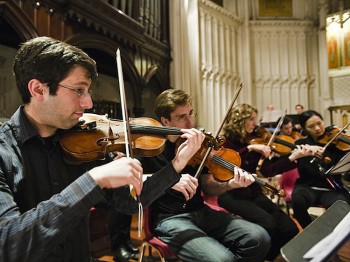 By Zachary Stieber
Print
NEW YORK—A unique group that seeks to present early Classical and Baroque repertoire to the public is taking it to a new level this week with a thought-provoking interpretation of “The Fairy Queen,” a 1692 piece of work by Henry Purcell, in which the spoken parts are edited lines from William Shakespeare’s “A Midsummer Night’s Dream.”

“The Fairy Queen” addressed intriguing social and political issues of the day, many of which are relevant to modern society, such as infidelity.

“It was originally an extravagantly huge production, as it obviously calls for spoken actors, singers, and dancers, and instrumentalists,” said Micheal, singer and chorus member who plays the part of Winter.

The production, from Big Apple Baroque (BAB), will be held at the Kaye Playhouse at Hunter College for the Performing Arts on Thursday and Friday at 7:30 p.m., with one show completed on Tuesday. There will also be a one-day inter-disciplinary conference on Wednesday at Hunter College to explore the time period in which “The Fairy Queen” was born.

BAB is a group that brings independent classical musicians together with talented early Classical specialists. Started in 2002, it was founded by harpsichordist and former historian Alan Fellows, who is also the director and conductor of the group.

“It’s more satisfying, because music is a social activity, inherently,” said Fellows, when asked the reason for forming BAB. “The recipe for success for the band has always been it’s a group of friends.”

Since its inception, BAB has held over 20 performances, with the majority at Calvary Episcopal Church in Manhattan. All of its performances have been for charity, most of them benefiting the homeless through the church’s homeless assistance program.

“It’s a very word-of-mouth organization. But a network of incredibly talented people that work at very high levels of music around town,” said Joshua Copeland, a singer at BAB.

BAB’s philanthropic efforts underscore the motivating factor for those involved with the group; not getting paid, they obviously are doing it for their love of theater. Made up of an impressive array of accomplished professionals, BAB has been preparing for “The Fairy Queen” for about a year.

Allison Pohl shared how many members joined BAB for their love of music, not money, and that the atmosphere is conducive to professional development—such as trying out new roles with unwavering support. She was recruited by Fellows after he heard her sing at a performance, which is similar to how many other BAB members came on board. The other method, almost exclusively used since the beginning of 2009, is that Fellows will simply inform everyone of positions that need to be filled; then, members pass the word on to other artists they know.

“The environment of playing with these people is really an enriching experience, at least for me,” said percussionist Mike Truesdale, who also appreciates the repertoire, which he doesn’t get to play all the time. “There’s a lot of collective knowledge about the Baroque era and Baroque music, it’s a great challenge for me to fit into that style, which is just great.”

“The Fairy Queen” will be the first commercial production for BAB. Fellows saw an interpretation of the semi-opera over a year ago, and thought, “we could do better.” There is hope that this performance will attract a broader audience base who can help support and further BAB’s dual, interwoven missions of performing classical works and helping the homeless, while showing viewers that the production is more than just music.

Conceived in early 17th century England at a time when the world was vastly changing morally, scientifically, and socially, “The Fairy Queen” is a semi-opera that addresses social and political topics of the time, including love, infidelity, trust, rising modern scientific and atheistic worldviews, and the role of government in society.

Just prior to its creation, there was a sweeping campaign against what was perceived as moral degeneration—especially infidelity—which caused London to be swept up by a large syphilis epidemic. A group of citizens wanted to rectify the situation, and led a campaign that included arresting gentlemen visiting brothels.

“This is a serious moral minority, and they were after the theater. ‘Fairy Queen’ is an attempt to say: ‘Hands off boys, we can reform ourselves, you don’t need to come near us, we can be entertaining and show marriage, this is politically correct.’ But you have to be a historian and interested in what is going in society and in politics to get this,” explained Fellows.

William III of the House of Orange and Queen Mary II were ruling England at the time, and there is a political symbolism throughout the work, especially with the color orange, depicted by things such as goldfish and orange trees.

The libretto, or spoken word portion, is derived from Shakespeare’s “A Midsummer Night’s Dream.” It was referred to as a masque, a form of court entertainment, and semi-opera. “There isn’t really a coherent story—the form is called semi-opera, it’s not really an opera, it’s kind of a funny hybrid. And because Purcell is a genius he made it all work, but nobody else could do this and get away with it,” said Fellows.

The form of semi-opera means that there is dancing, singing, the aforementioned spoken word, and music. This modernized version includes film projection describing events that happened at the time, such as the murders which inspired Purcell, acted out in “nitty-gritty detail in black and white,” according to Pohl, who is in the film.

The performance’s duration is about three hours, trimmed from the original six to seven hours. Dusan Tynek Dance Theatre, which comprises eight internationally accomplished dancers from places as diverse as Japan, Venezuela, and the United States, is the dance company in “The Fairy Queen.”

Asked whether she thinks the performance will have an impact on the audience, Hilary, another singer, said, “It should make you at least examine who you are and what you think about, if not actively change that in some way. And I think we’re presenting it in such a different way, such a novel way, that it will force people to think about it because they haven’t seen something like this before, or they haven’t seen it that often.” She recently graduated from Columbia University with a music degree.

She also thought the social issues addressed could also help people broaden their horizon: “You hear so much about the sanctity of marriage. So considering the way the opera looks at, it’s a very old opera looked at in a very new way, I think that will encourage people to take a different view on marriage, and try to look at it in a different way, I think it can only be healthy.”

All the singers in the semi-opera have solos and are part of the chorus. “The ensemble plays fairies, and townspeople, and there’s a court, and allegorical figures, there’s characters that play sleep and secrecy and night, and characters that play all four seasons in this masque,” said Micheal.

On Wednesday, BAB held a one-day interdisciplinary conference at Hunter College, which brought together professionals like musicologists, performers, and historians to examine the time period when “The Fairy Queen” was originally performed. Speakers included Alan Fellows on the future of restoration theater, Dr. Brent S. Sirota from North Carolina State University discussing revival and revolution in Purcell’s London, and Dr. Andrew Walkling from SUNY-Binghamton on interpretations of Act V of “The Fairy Queen.”