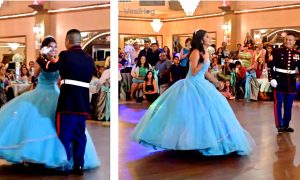 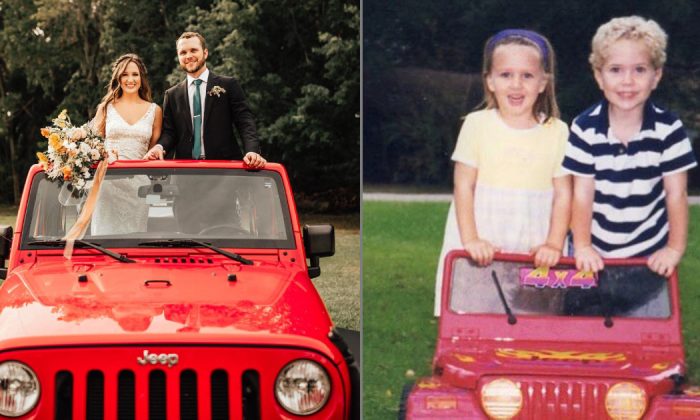 Newlyweds Natalie Crowe and Austin Tatman recreate a childhood memory at their wedding in New Smyrna Beach, Fla., on April 13, 2019 (L) and the same couple in a toy Jeep back in 1999 (R). (Austin Tatman/Facebook)
US News

Two best friends who were separated during their childhood have reunited after more than a decade apart and plan to stay together for the rest of their lives as a married couple in Florida.

Austin Tatman and Natalie Crowe, both 24, had not seen each other since they were 5 years old when Crowe moved to Connecticut with her mother and siblings.

The pair spent 12 years almost 1,300 miles apart until Crowe was a teenager and decided to go through contacts listed in her mom’s old address book in a storage bin during summer 2012.

She revealed she was searching for a specific name.

“For whatever reason, the first person to come to my mind was Austin. Still to this day, I have no idea why I went to it,” Crowe told TODAY.

“She would say, ‘If you remember him, then he remembers you,'” she said.

For Tatman, reconnecting with Crowe was like taking a nostalgic trip back to a simpler time.

“It was just like being back with your best friend that you haven’t seen, which was the craziest experience for me,” Tatman said. “You can never replicate that … being away from someone and reconnecting.”

He described his connection with Crowe as “very special,” a view the parents from both families shared. The two would hold hands when they went trick-or-treating and going for a spin in Crowe’s father’s boat.

“From the second that we met in pre-kindergarten we were best friends,” he said. “Our parents pretty much told us that it was a very, very special bond that we shared.”

The couple revealed they first met in the same pre-kindergarten class of 1999 in Ocala, 80 miles northwest of Orlando.

“We would always hang out on the side kind of by ourselves,” Crowe said.

After adding each other as friends on Facebook, the couple finally traded cellphone numbers and discovered that Crowe’s father still lived 10 minutes away from Tatman. They decided to meet in person in Florida.

The parents from both families were very pleased to hear the long-lost friends would meet again.

“They were both over the moon about us getting together,” Crowe said.

“Both sets of our parents were so supportive when we first reconnected,” Tatman said. “They were just as excited, if not more excited, than we were.”

When Crowe and Tatman met again they fell in love with each other. On their following date they enjoyed listening to Tim McGraw’s song “My Old Friend” on the radio. The 2004 country music hit resonated with the history of their relationship.

“The song was really key to our relationship,” Crowe said. “It was so spot-on to our journey.”

The couple continued to maintain a long-distance romance as they became seniors in high school. Finally, Crowe gained admission to the University of Central Florida (UCF) in Orlando while Tatman attended the University of Florida in Gainesville, 125 miles north of UCF.

Tatman proposed to Crowe in 2017 on the beach in Fort Lauderdale witnessed by their family members and friends.

They got married on April 13 in New Smyrna Beach, 56 miles northeast of Orlando. The couple recreated a childhood photo of them standing in a red toy Jeep by standing in their wedding attire in a real Jeep off-road SUV.

The wedding guest book was in the style of an address book as a tribute to the real address book that contained Tatman’s contact details that led to the pair finding each other again.