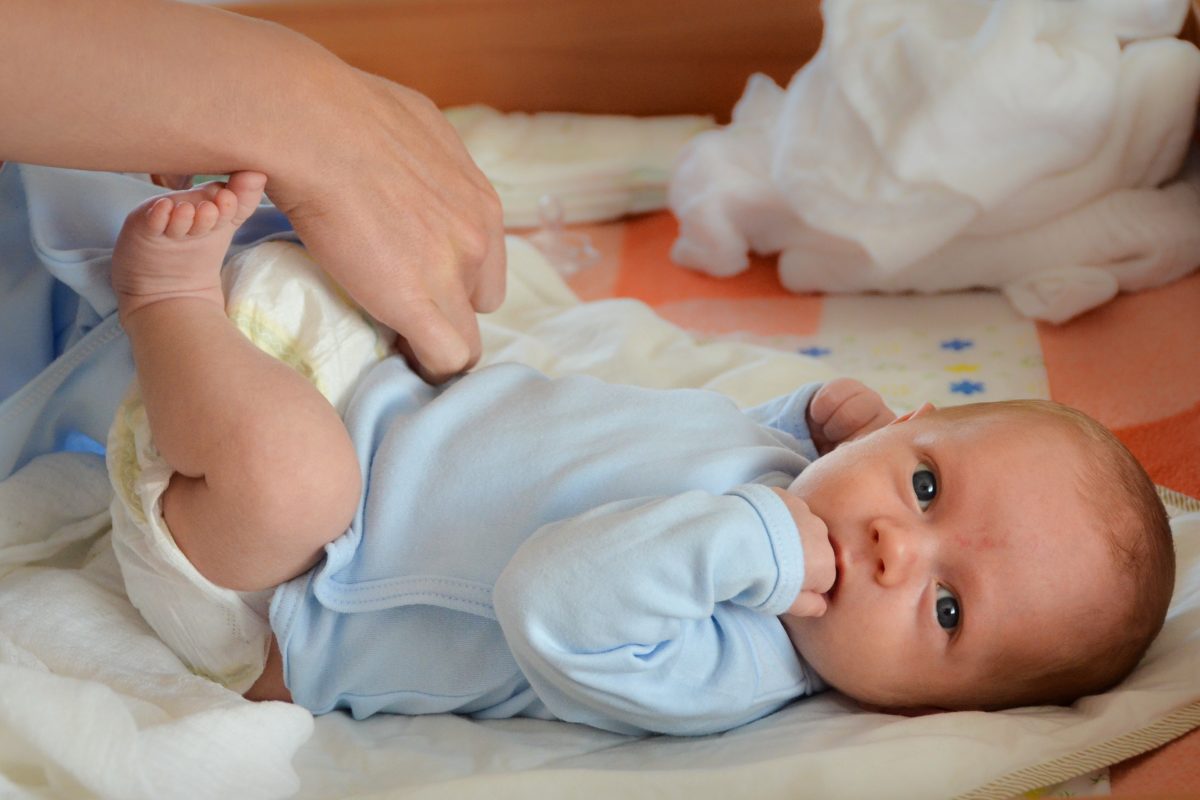 I’ll never forget the moment, sitting there in a post-graduate seminar in Chicago, when I realized that as a chiropractor I had been really, really messing something up.  I wasn’t a newbie by any means- I’d been in family practices for 7 years by this point, served my profession at the state and national level, and won a major award for my alternative health news podcast.  But here I was at the Doubletree being shown the most basic concept about changing an infant’s diaper, and I was dumbfounded.

Most of us do the double-leg lift.  Okay, let me write that another way:  Almost all of us do the sniff check, undo the diaper, lift the baby up by the legs to get the dirty out, wipe the creases and insert the clean one in.  A couple swipes of the tape, Velcro or snaps and it’s all done.  It’s the way we’ve seen it done in the movies, on TV, and in our own living rooms for generations.  It’s even rational- once new babies discover their feet, it’s almost impossible to keep them out of their mouths!  But I’ll tell you this- the way most of us have intuitively changed a diaper is not sound spinal biomechanics, and it very well may be the cause of your baby’s colic.

The double leg lift is pretty intuitive, so I don’t blame us for thinking it was the right way to change a baby.

That’s where the face to palm moment came for me.  As a chiropractor in family practice, I’d seen plenty of colicky babies.  We’ve done plenty of research on it as a profession and have witnessed pretty impressive results- one study showed adjustments were more effective than medication for colic, and another showed a 93% success rate in helping children with the symptoms of gas, bloating and pain.  We understand that the intestines get a large portion of their nerve information from the area of the spine near the bottom of the rib cage and the upper portion of the low back.

It’s one of the areas we check when a parent brings their child in with colic symptoms because interference to that flow keeps the intestines from functioning properly.   If the area is being interfered with, or subluxated, than adjustments help restore normal function and allow the body to heal.  The reason chiropractic works so well for babies is that it deals directly with the nerve system, and that’s the system running the whole show.  I’d been doing this in practice for years, but I was missing something pretty important.

When we’re born we have one spinal curve.  It’s the fetal position, the c-shape that our middle backs keep, which is necessary to stay tucked nice and snuggly inside our moms.  That primary curve is the only curve we have as an infant until we build the other two in our spine.  The first re-shaping of the cervical spine happens in our necks when we learn to lift our bobbly heads and hold them up.  The second, called the lumbar curve, happens in the low back, and it forms when we learn how to crawl.  We need these secondary curves to support our body weight for standing, bending, and lifting.

But until we build them, the mechanics of the spine function very differently.  If you think of a baby’s spine like a bridge, one that doesn’t have a cervical or lumbar curve, then the peak of the bridge is between the 9th and 11th vertebra in the thoracic spine.  To give you an idea of where that is on you, the ribs that make up your ribcage exit at the 8th thoracic vertebra, and the “floater” ribs exit from the 9th to the 12th.  Compare that to where an adult’s peak is -right between the shoulder blades- and you’re going to come to the same realization I did.

I advocate the roll technique for diaper changing babies who haven’t started crawling yet.

If you were hunched over a lot, like if you were working on a laptop or driving for too long, most people start feeling tightness in their middle backs as their vertebra start creeping backwards out of position.  The more you do it, the more sore it gets.  In a way this is exactly what is going on with our babies when we raise their legs over and over again to change their diapers- a lot of parents without realizing it are causing the subluxations and nerve interference that results in the colic I see in the office.  Yet until that class, I had no idea why I kept seeing the same colicky kids over and over again!

The double leg lift is pretty intuitive, so I don’t blame us for thinking it was the right way to change a baby.  Infants are folded inside mom, and once they discover their feet it’s virtually impossible to keep them out of their mouths.  But the difference in the bending here is at the hip joint.  The femur heads in infants are barely developed because they don’t need the bony structure for standing or the muscle strength and tension for walking.

That lets them fling their feet over their heads and giggle without even thinking about it.  But when we use those legs for handles for a child who doesn’t have that secondary lumbar curve, we’re folding the spine at its peak, pushing the vertebra out of alignment where the nerve flow for the intestines comes out, and we’re doing this how many times?  Three?  Five?   Seven times a day?  No wonder chiropractic has such a high success rate with colicky babies – we just put back what parents keep putting out!

We need to break this cycle, for everyone’s sanity.  This is why I advocate the roll technique for diaper changing babies who haven’t started crawling yet.  It takes a little practice, but after a few days you’ll get used to it.  Holding the baby by her chest and rolling side to side keeps her spine in alignment and will help hold her adjustments so much better.

Acupressure for Babies for a Good Night’s Sleep

Can’t Get a Baby to Sleep? Here’s an Amazing Trick that Works in 45 SECONDS