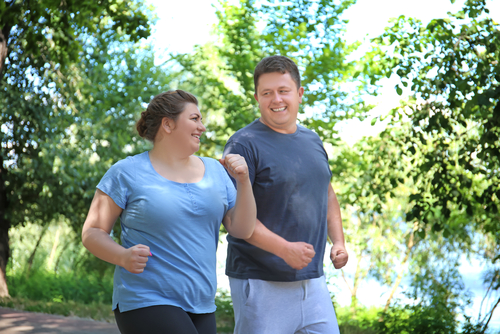 Total loss of fat mass, through a healthy diet and exercise, is the best outcome for overall health. (Shutterstock)
Nutrition

Belly Fat Is the Most Dangerous, but Losing It From Anywhere Helps

Excess storage of fat is linked to many different chronic diseases. But some areas of fat storage on the body are worse than others.

In general, women have greater absolute body fat percentages than men. Typically, women carry more fat around the legs, hip and buttocks, as well as the chest and upper arms. Women have more subcutaneous fat—the fat you can pinch under your skin—while men typically have more visceral fat, which is stored in and around the abdominal organs.

Why Is Belly Fat More Dangerous?

Excess fat around the tummy is subcutaneous fat—which you can pinch—as well as visceral fat, which is in and around the organs in the abdominal cavity and only visible using medical scans. Researchers have found excess visceral fat storage is a significant risk factor for metabolic health complications of obesity such as type 2 diabetes, fatty liver and heart disease.

Fat cells in a healthy person are able to grow, recruit inflammatory cells to help reduce inflammation and remodel themselves in order to allow for healthy body growth. But if there is excess fat tissue, these mechanisms don’t function as well. And with excess fat, the body can become resistant to the hormone insulin—which maintains our blood sugar levels.

Visceral (belly) fat secretes greater levels of adipokines—chemicals that trigger inflammation—and releases more fatty acids into the bloodstream. Whereas the fat cells in the leg region, and the pinchable, subcutaneous layers of fat around the middle, store fatty acids within themselves, rather than pushing them into the circulation.

The fat around the hips and legs is more passive, meaning it releases fewer chemicals into the body.

A recent weight-loss study that looked at where fat mass was lost found the area of fat loss didn’t change the risk factors for heart disease and stroke. The important thing was losing fat from anywhere.
While diet and exercise are unable to specifically target regions of fat depots, fat mass loss from anywhere can improve risk factors.

Online ads might tell you a magic workout machine will reduce fat in one particular area, but adipose tissue is unable to be targeted in the same way that we can target a specific muscle group.

Total loss of fat mass, through a healthy diet and exercise, is the best outcome for overall health and reducing either the symptoms of chronic disease (such as diabetes) or the risk of developing disease such as diabetes or heart disease.

Evelyn Parr is a research fellow in exercise metabolism and nutrition at the Mary MacKillop Institute for Health Research at the Australian Catholic University. This article was originally published on The Conversation.