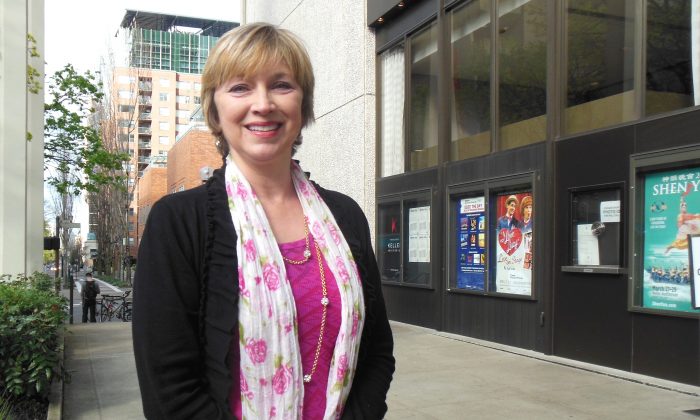 For some, Shen Yun embodies the perfection of Chinese dance or its blend of music from East and West. For others, it may be the hand-sewn costumes, the history lessons from China’s 5,000 years of culture that emphasize harmony between heaven and earth, or its message of divine culture returning to the Middle Kingdom.

‘Instead of from your skin in, from the heart out’

Ms. Victor attended the March 28 performance at the Keller Auditorium, Shen Yun’s second day of Portland’s 2015 performances. As a ballet instructor and owner of Victor School of Performing Arts International, Ms. Victor is no stranger to high-caliber dance. After all, she has been instructed by and worked with many prominent names in ballet.

Even considering Ms. Victor’s pedigree in ballet, she described ballet and Shen Yun as “two different worlds.” But especially in terms of spiritual foundations, she noted the divergence in the two forms: “Ballet didn’t come from a deep spiritual tradition, so in a way it’s limited,” she said.

Ballet, Ms. Victor added, “came from the ancient court of Louis XIV in France. It didn’t come from a spiritual motivation. It came from social graces and how to present yourself in society.”

Shen Yun, however, “connects to your human spirit and life,” she said. “It’s just completely profound, and I really wish from heaven to earth that the company will grow and grow.”

While Ms. Victor felt a special affinity for Shen Yun’s inner meanings—what she referred to as “the seeking of the human spirit for truth and for beauty, and that they match”—she was most touched by Shen Yun’s musical arrangements, notably the solo performance of the two-stringed erhu.

“Actually to me, even though I loved the whole production, the high point for me was the violinist, the Chinese violin—that was the very, very highest point,” she said.

Shen Yun’s music combines the orchestration, power, and precision of the West with the spirit and distinctiveness of Chinese music. And the erhu, with its 4,000-year history, is given special prominence with its own solo performance. “Though it only has two strings, it can express a vast array of feelings,” says the Shen Yun website.

During its solo performance, the erhu’s first three notes struck Ms. Victor’s heart. “It was almost like those three notes were like a knife that cut the atmosphere between the physical and the spirit—like it just opened,” she said. “I’m feeling emotion just remembering the purity of her sound.”

Ms. Victor said she “could go on a lot about their technique and the skill with which they’re being trained,” but she noted the importance of Shen Yun’s mission to revive ancient Chinese culture.