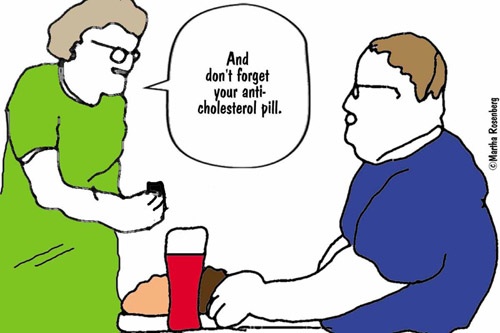 Statins have even approved in a chewable form in Europe!
Health

Bad Diets for Kids–and the Drugs That Enable Them

New York City Mayor Michael Bloomberg’s proposed ban on large-size soft drinks has focused much needed attention on childhood obesity and related health problems. Over one-third of U.S. kids are overweight, and 17 percent are obese—which, for a four-foot-ten-inch child would be a weight of 143 pounds. Obesity predisposes people to diabetes, hypertension, high cholesterol, sleep apnea and respiratory problems, gallbladder disease, osteoarthritis and musculoskeletal disorders. It prevents children from playing and group recreation with their peers and sets them up for a lifetime of bullying and low self-esteem. Obesity is also linked to a shorter life and to cancer. Clearly, Mayor Bloomberg has the right idea.

Statins are a popular drug that lowers cholesterol levels by inhibiting a liver enzyme involved in the production of cholesterol. They can reduce cardiovascular risks in those who need them, but are overprescribed, expensive, and less desirable, according to clinicians, than lifestyle changes to lower cholesterol. Adults on statins are six times more likely to develop liver dysfunction, acute kidney failure, cataracts and muscle damage than those not taking the drugs, says a 2010 article in the British Medical Journal.

Still, the temptation to pop a pill rather than unplug the TV and put down the sugary and fattening snacks is always there, especially when so many TV and drug ads tell you to do exactly that. It’s also easier to give a pill to a child than deny him or her a favorite food.

“Plenty of adults down statins regularly and shine off healthy eating because they know a cheeseburger and steak can’t fool a statin,” writes Michael J. Breus, PhD, on the Hufﬁngton Post. “Imagine a 10-year-old who loves his fast food and who knows he can get away with it if he pops his pills.”

The use of prescription drugs is rising four times faster among children than in the overall population and they are often prescribed for “adult diseases” not previously seen in children. Twenty-five percent of children and 30 percent of adolescents now take at least one prescription for a chronic condition, says Medco, the nation’s largest pharmacy beneﬁt manager. Medications for treating high blood pressure have risen by 17 percent among kids, respiratory medications have risen 42 percent, heartburn and gastroesophageal reﬂux disease (GERD) medications have risen 147 percent and diabetes medications have risen an astounding150 percent, according to Medco. Fifty percent of pediatricians also say they prescribe insomnia drugs to kids. And of course five million kids take stimulants in accordance with the very controversial diagnosis of ADHD.

Children, of course, are easier pill “customers” than adults because they are given the drugs by parents, teachers and doctors and can’t really refuse. But both adults and children need to tune out the ubiquitous ads for unhealthful food and drugs they see on TV. These ads do more for the health of Big Food and Big Pharma than for the health of the nation.