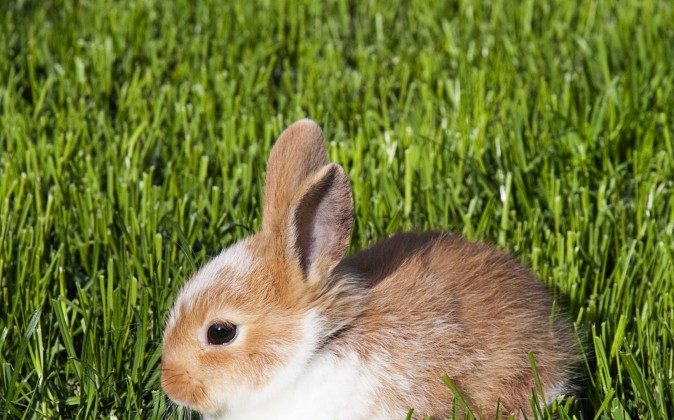 Baby Rabbit Calls Out to Be Saved From Deadly Snake

I’d like to share a snapshot with you of life on the ranch. If you’re dedicated to protecting life (as I am), you sooner or later end up saving animals of all kinds. Today I was able to save a baby rabbit from a snake (see photos below).

Baby rabbits really do scream for help when they are threatened by predators, by the way. I first noticed this rabbit screaming as I walked by an area of my yard with a lot of tall grass. I heard the high-pitched “eee! eee! eee!” that baby rabbits make when they are threatened. (If you live in the country, sooner or later you learn all the sounds made by all the animals. This sound was clearly a rabbit-in-danger sound.)

Confused about why a rabbit might be in trouble, I ventured closer and saw the rabbit scuttle underneath some brush. (The feature picture for this article is not the actual picture of the rabbit but rather the closest resemblance I could find.) The rabbit looked fine to me, but I decided it might be hungry so I gathered up some veggie leaves from my small pallet garden (see picture below) and went back to drop them in the area near the rabbit.

As I got closer, a giant snake literally leaped out of the grass right in front of me. (Apparently I scared it.) This snake was a non-venomous snake but precisely the kind that hunts field mice, field rats and, yes, baby rabbits.

I immediately grabbed my snake grabber device — a 6-foot aluminum pole with a clasp handle on one end that articulates a snake clamp on the other end — and dove back into the grass for the snake. He tried to escape but I could clearly see his movement rustling the tops of the grass, so I thrust the snake grabber where I hoped he would be and squeezed the clamp.

Bingo! I got the snake! I carried him to a barrel I had nearby, partially filled with some old grain (such is farm life), and plopped him into the barrel:

My rule on snakes is that if they’re non-venomous, I don’t shoot them — I relocate them. Hence the use of the barrel.

Here’s the picture of the snake inside the barrel. As you can see, he’s pretty thick and beefy for a rat-eating snake. If he wasn’t threatening the bunny, I probably would have left him alone just so he could eat more rats.

A few minutes later I had let him loose far from the rabbit, and he slithered away in a slight panic. When I went back to check on the baby rabbit, he was now quiet and apparently felt safe again. “Wow,” I thought to myself. “I wouldn’t have even checked that area if not for the warning cries of the rabbit.” By crying out, that rabbit caused me to take action that saved its life.

Here’s a picture of the corner of one of my pallet gardens:

If you grow gardens in pallets, make sure you use non-toxic wood. Some pallets are treated with chemicals.

BTW, welcome to life on the ranch, where I’m capturing snakes on a regular basis, working hard to keep our free-range chickens safe from predators, and learning more and more each day how to life in harmony with the natural world while protecting the lives of our farm animals.