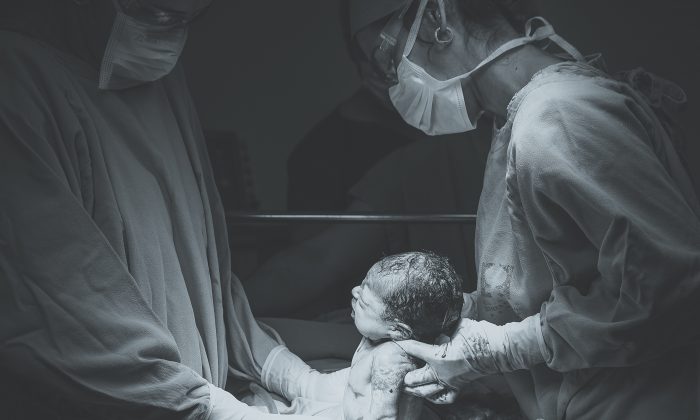 Hospital practices like early infant bathing and antibiotic eye prophylaxis may reduce the amount of beneficial bacteria that babies born in hospitals have. (Patricia Prudente/Unsplash)
Treatments and Techniques

Understanding why babies born at home have more diverse microbiota for at least a month after birth, compared with those born in a hospital, could help prevent disease later in life.

The human microbiome consists of trillions of bacteria, fungi, and viruses that live on and in our bodies, many of which benefit our health and prevent chronic conditions such as obesity, diabetes, asthma, and gut inflammatory disorders. Microbes transmitted from mother to baby help prevent chronic disease.

“The reasons for the differences between infants born at home versus in hospitals are not known, but we speculate that common hospital interventions like early infant bathing and antibiotic eye prophylaxis or environmental factors—like the aseptic environment of the hospital—may be involved,” said senior author Maria Gloria Dominguez-Bello, a professor of microbiome and health at Rutgers University.

In the study, which appears in Scientific Reports, researchers followed 35 infants and their mothers for a month after birth. Fourteen infants were born at home (four of them in water) and 21 in the hospital. All 35 infants were delivered vaginally without interventions (including no maternal antibiotic treatment) and were exclusively breastfed. Midwives who supported mothers delivered all infants, and mothers all had skin-to-skin contact with their babies and began breastfeeding shortly after birth.

While more research is necessary, the study suggests that revamping the hospital environment for non-high-risk births, so it more closely approximates home conditions, may be beneficial.

Researchers from New York University; Sejong University in Seoul, South Korea; and the University of California, San Francisco also contributed to the study.