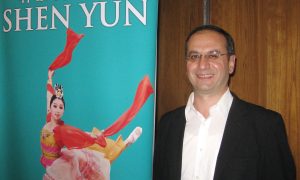 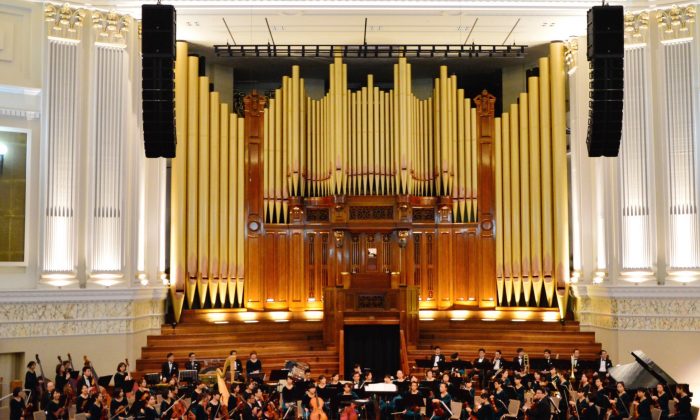 BRISBANE, Australia—After an Australian debut performance at Sydney’s Opera House, a very warm Queensland welcome by International and local dignitaries, the local Taiwan community and Brisbanites was extended to “The Sound of Taiwan” performance.

The orchestra fosters young musicians and is sponsored by a private foundation; it travels the world sharing Taiwanese culture wherever it performs; and it is joined by international artists as it presents both Eastern and Western sounds.

The effect of the blue/green shimmering dresses of the female musicians contrasted well with the impressive backdrop of a pipe organ and copper domed ceiling as the orchestra entered Brisbane’s historic auditorium stage.

Harmonnia Junus, an Australian born violinist, but now New York-based, delighted the packed auditorium with her entrancing interpretation of the Butterfly Lovers, a violin concerto—her light interplay with the orchestra developing into a more sombre and tension filled segment then into an uplifting yin and yang resolution. During an Epoch Times interview, she said that to play the piece well she researched “a lot into what the piece meant—it is a programmatic piece—and of course it really spoke to a lot of the Chinese audience.”

Her research led her to discover more about Chinese culture, she said, “In Chinese culture often, we’re not the most emotional of people, and speaking to people and understanding the story, it actually has a very deep emotional connection … because it makes them think about their lives and how they would feel in the situation that the girl and the boy were in.” The Butterfly Lovers concerto parallels the Romeo and Juliet theme known in the West.

Bamboo flutist Cin-lin Miu wowed the audience with her ability to transport the audience to mountains and forests during the Bamboo Flute Concerto by Shi-long Ma. She was master of her flute and produced pure sounds that entranced the whole auditorium.

Gernot Schmalfuss was commanding as conductor and as music director shared his special touch with the dramatic Western pieces. The enthusiastic audience insisted on encores and after three more beautiful pieces reluctantly let the orchestra depart, but not until the flowers for the soloists were given and photos taken.

EVA Air and Evergreen Lines, as sponsors, and the World Arts and Multi-Culture Inc., as hosts, certainly were successful in sharing the unique, professional classical music from Eastern traditions with the international audience present in Brisbane City Hall.

With reporting by Sybille Lee and NTD Television