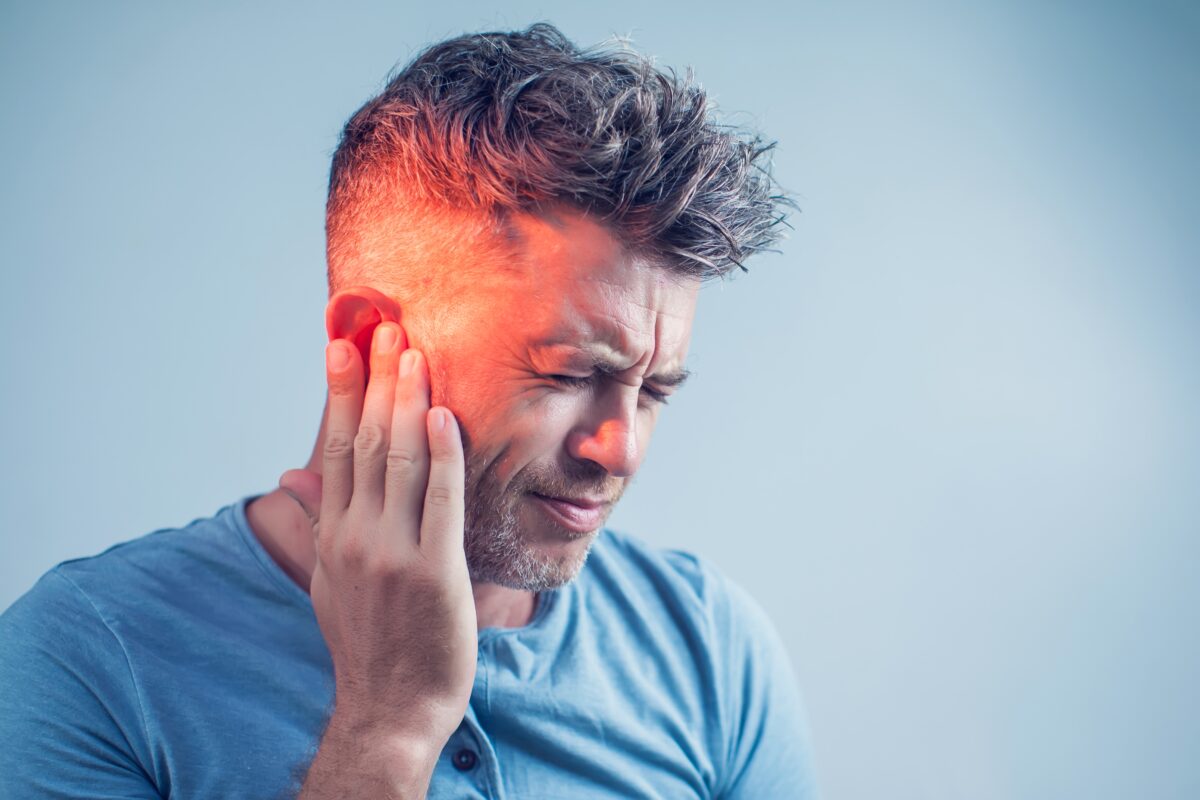 The miraculous ease and effectiveness of auriculotherapy
BY Health 1+1 TIMEJune 30, 2022 PRINT

In the face of pain, the common treatment method in hospitals is to use painkillers, but many patients’ pain doesn’t get relieved after taking them, and the painkillers also bring side effects. There are many examples of using auriculotherapy for pain, which is fast and effective, and has no side effects.

Curing a Stiff Neck in 3 Days

An office worker woke up one day with a stiff neck, which was immobile and painful. As a result, she even had difficulty checking her blind spots while driving.

After one treatment session, she said that her neck was no longer painful, and approximately 80 percent of her neck’s range of motion was restored. After applying ear seeds for three consecutive days, the lady recovered completely.

A man injured his lower back while shoveling snow and was unable to move, he had an acute lumbar strain. After receiving acupuncture treatment on his hands and having ear seeds put on several of his auricular acupuncture points, the patient was able to move around at the clinic on the same day. Overjoyed, he commented, “This is amazing!”

There are many other similar examples that Liu and doctors like him could share. In addition to pain, the stimulation of auricular acupuncture points is very effective in treating digestive disorders, pregnancy reactions, insomnia, anxiety, endocrine disorders, cardiovascular disorders, and hypertension. And it’s even effective in helping one quit smoking, and lose weight, as well as eliminating drug and alcohol addiction.

Ear Acupuncture Points Correspond to Every Organ in the Body

The development of auriculotherapy is the result of collaboration between Eastern and Western scholars.

Dr. Paul Nogier, a French neurologist and physician who is known as the “father of modern auricular therapy,” discovered that the distribution of acupuncture points on the ear resembled an inverted fetus, so he first announced the concept of an inverted fetus map on the auricle at the Marseille Acupuncture Conference in France in 1956.

In the 1990s, through the collaboration of Eastern and Western academics, the World Federation of Acupuncture Societies (WFAS) published a chart with as many as 200 auricular acupuncture points (including approximately 85 in common clinical use) located in 14 areas of the ear.

Earlobe: corresponds to the head and face

Antitragus: corresponds to the head and brain

Area between the antitragus and the antihelix: corresponds to the brain stem

Tragus: corresponds to the throat, inner nose and adrenal glands

Antihelix: corresponds to the trunk, including the spine

Superior crus of antihelix: corresponds to the lower extremities

Inferior crus of antihelix: corresponds to the hips and buttocks

Scapha: corresponds to the upper extremities

Triangular fossa: corresponds to the pelvis and genitourinary organs

Cymba of auricular concha: corresponds to the abdominal cavity and the organs inside it, such as the digestive tract, large and small intestines, spleen, liver, kidney and bladder

Cavity of auricular concha: corresponds to the thoracic cavity and the organs inside it, such as the heart, lungs, trachea and bronchi

Crus of helix: corresponds to the thorax and diaphragm

In other words, the ear can map to all the organs of our body.

A Crease in the Earlobe May Signify Coronary Heart Disease

The ear is not only therapeutic, but can also help diagnose diseases.

Therefore, some manifestations of the ear can be used as a basis for early diagnosis, which is even more effective than blood tests and CT scans.

In the 1970s, there was a very interesting study published in the New England Journal of Medicine (NEJM). Sanders T. Frank, director of respiratory medicine at Garfield Hospital, discovered that an earlobe crease could help in the early detection of coronary heart disease.

For this reason, the crease is also known as “Frank’s Sign.”

In this study, 19 out of 20 people with earlobe creases had one to six risk factors for coronary heart disease, including high cholesterol, high blood sugar, high blood pressure, smoking, and a family history of cardiovascular disease. Many studies have since been conducted to confirm this association.

Another study was recently published in the New England Journal of Medicine, referring to one case.

A 59-year-old male patient with hypertension had exertional angina pectoris (chest pains due to coronary heart disease). However, his electrocardiogram showed no significant abnormalities. Subsequently, a coronary angiogram was performed and revealed severe coronary stenosis, which led to the placement of two stents. Interestingly, his bilateral earlobes had long had Frank’s Signs.

Former President George W. Bush Jr. was diagnosed with coronary artery disease on August 6, 2013, at a hospital in Dallas, Texas, and had a stent implanted. He had had Frank’s Signs in both of his earlobes long before that.

If President Bush Jr. had noticed these creases earlier, examined his heart problem in depth, and treated it early, he might have recovered quickly without the need for a stent.

We can also determine diseases by the color, shape, flaking skin, and angioplerosis (filling of the blood vessels) of the ear. For instance:

Flaking skin: Dermatological and endocrine disorders may be involved.

Morphological changes: If nodules and/or striated protrusions appear on the ear, it may indicate a substantial lesion in one of the organs, such as a tumor or uterine fibroid. If there are depressions, it may signify atrophy of the organs. For example, if there is kidney atrophy, depressions may appear in the kidney reflex area of the ear.

For example, if there are blood vessels filling up in the area of the ear corresponding to the heart, it may be a sign of coronary heart disease; if an obvious nodule with a reddish color appears, it may be a warning sign of an acute heart attack. Nodules often imply a more serious condition than angioplerosis.

In the area of the ear corresponding to the lungs, if a large nodule with a bright red color appears, it often signifies an acute outbreak. If the nodule’s color is dark, then it signifies chronic pneumonia or pulmonary fibrosis.

How to Use Auriculotherapy Yourself

There are many methods in auriculotherapy. Professor Liu has recommended a very simple one. You can take some Vaccaria seeds and press them with your fingers onto the ear acupuncture points to stimulate them by using the principle of physical pressure.

If you don’t have such seeds, you can also use your fingers or a small massage wand (with a blunt tip) to apply pressure. One doctor in China even does it with a matchstick. You keep pressing the points until you feel a little sore.

Here are some common auricular acupuncture points that you can press on your own. You can press each point 30 times in the morning, in the afternoon, and in the evening.

People with hypertension can massage the Jiaogan (AH6a), Pizhixia (AT4; subcortex), and Heart Points on their ears

Massaging these acupuncture points can regulate the balance of the body’s autonomic nerves, and make the parasympathetic nerves rise and the sympathetic nerves calm down. At this time, it can reduce tension and anxiety, and cardiovascular and other organs will also be functioning in a more stable manner. Massaging these areas can also regulate the body’s energy system to re-establish its balance.

However, these methods are used for regular maintenance and disease prevention, not for first aid.

If you have caught a cold or have a stuffy nose, you can press and rub the Shenshangxian Points (TG2p; adrenal gland) 30 times until your ears feel a little sore and swollen. The Shenshangxian Points on the ears have many functions, including improving the body’s immunity, regulating blood pressure, and effectively treating nasal congestion.

If you are experiencing headaches or dizziness, you can press and rub the tips of the ears without a precise area, just by using your thumbs and index fingers.

Health Secrets in the Ears

In the process of exploring life, human beings have made many discoveries beyond our awareness.

The aforementioned French neurologist, Dr. Nogier, once discovered that several of his patients had small burns on their ears. He further learned that a doctor had been using the cauterization method to treat sciatica with great effect. This aroused Dr. Nogier’s attention, and he began to study auricular therapy in 1951.

In the 1990s, many Chinese and Western academics realized that the auricular acupuncture points on the ear are indeed highly regulating to the corresponding organs of the body, and they explained that auricular acupressure treats diseases through the parasympathetic nervous system.

In ancient China, the philosophy of Taoism and traditional Chinese medicine promoted peacefulness and inaction. In this kind of state, the parasympathetic nerves can function most effectively to put the body in balance. In fact, auricular acupuncture is used to stimulate this effect.

In traditional Chinese medicine, the ear is not just an organ of hearing. In terms of meridian theory, the meridians are a network of six Yang meridians (large intestine, small intestine, bladder, San Jiao, gallbladder, and stomach) and six Yin meridians (liver, heart, spleen, lung, kidney, and pericardium). All six Yang meridians pass through the ear, and all six Yin meridians are connected to the ear through channels and collaterals. From this point of view, all the meridians of the body are actually connected to the ear.

The theory of meridians is enlightening to scholars from all over the world. What we see with our naked eyes is only the surface of the human body, and the inner mechanism of the human body is full of mysteries that are still waiting to be explored.