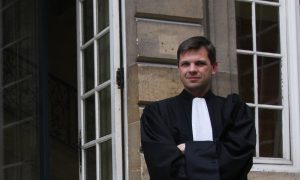 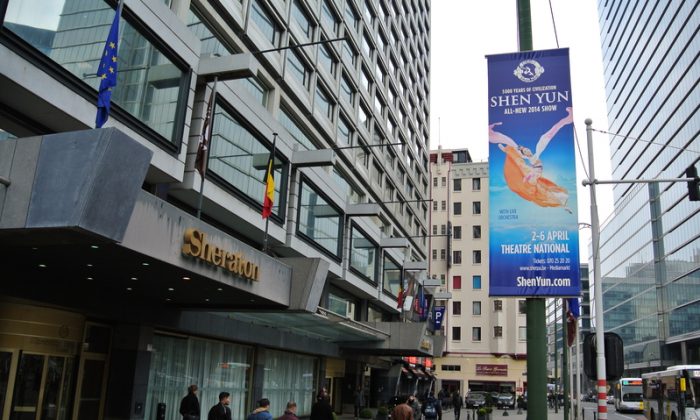 A poster for Shen Yun Performing Arts is posted in front of a Sheraton hotel in Brussels, Belgium. Chinese Communist Party leader Xi Jinping is scheduled to stay at the hotel, and the Chinese consulate has asked for the posters to be removed. (Xiaoran / The Epoch Times)
China

Chinese authorities are pressuring Belgium to cover or remove posters advertising a show of classical Chinese dance, during the visit of Chinese Communist Party (CCP) leader Xi Jinping’s this week.

Shen Yun Performing Arts is scheduled to perform at the National Theater in Brussels April 2–6. Shen Yun, which performs in around 20 countries and 100 cities around the world each year, has set out to revive China’s divinely inspired culture, yet cannot perform in mainland China.

Xi is staying at the Sheraton hotel in Brussels, which is near the National Theater. A Shen Yun billboard can be seen on a less than 15 feet from the entrance to the hotel. From April 2 to 6, Shen Yun Performing Arts is scheduled for six performances at the theater.

The performances will take place as world leaders, including President Barack Obama, are in Brussels for a summit. Belgium is home to the European Union, European Parliament, and NATO.

The poster campaign for Shen Yun is being run by BHS Promotion, an ad agency, which did not immediately respond to questions sent by email.

A BHS Promotion representative told the EU Observer it had been called by the Brussels central police department and asked to remove posters advertising Shen Yun, saying they posed “problems for diplomacy.”

The police later canceled the request.

Meanwhile, the central police department had also sent a letter to the Belgian Falun Gong Association, which is organizing the performance in Belgium. It was asked to cover or remove all the Shen Yun posters.

Nicolas Schols, the Falun Gong Association volunteer spokesman, told reporters in Belgium that police told him a “crisis cell of internal affairs is being pressured by the Chinese Consulate,” according to the EU Observer.

Schols said the police had later canceled their request, just as they had canceled the request to the ad agency.

Despite the pressure from the Chinese Consulate, however, the upcoming performance by Shen Yun has won support from European leaders.

Edward McMillan-Scott, vice president of European Parliament, sent a letter to the mayor of Brussels, stating that the CCP issues similar threats to theaters every year, and said it is good news that the problem has been resolved.

The CCP’s pressure for the April performance marks the third time Chinese authorities tried to cause trouble for a Shen Yun performance in Brussels.

In March 2013, the National Theater temporarily stopped selling Shen Yun tickets due to what was revealed to be pressure from Chinese authorities. According to the Minghui website, the National Theater later resumed normal operations and issued a statement saying, “We have a contract. Belgium is a free society. The theater respects the right to freedom of expression.”

Two years before that, the CCP had also tried unsuccessfully to cancel a Shen Yun performance in Brussels at the same theater. According to Minghui, it was found that staff from the Chinese Embassy had contacted the manager of the theater and asked him to cancel the performance.

The manager rejected the request.

In what was almost certainly an unintended consequence of the Communist Party’s meddling, the Belgian Falun Dafa Association, which is presenting Shen Yun, organized a press conference on March 28, calling on the Belgian Government and media to investigate the efforts to remove advertising for Shen Yun, and maintain cultural freedom.

This attracted a great deal of media attention by a number of Belgian news outlets.

Schols, the Falun Gong spokesperson, was quoted discussing the Communist Party’s destruction of Chinese culture, and the persecution of the practice of Falun Gong.

“The Belgian government has come under pressure, which it resisted,” he said.

L’Avenir, a local newspaper, and La Libre Belgique, both covered the fracas. “Why might a picture of an elegant Chinese dancer make President Xi unhappy?” an article in the latter publication asked.

“This performance depicts not only China’s 5,000-year traditions, but also the Communist Party’s persecution of Falun Gong practitioners,” the article said.