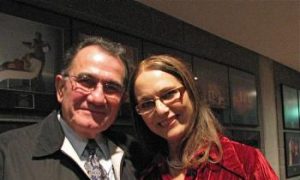 Artistic Individuals Get the Picture With Shen Yun Animated Backdrop

KITCHENER-WATERLOO, Canada—Art came to life for a painter and longtime gallery registrar at Centre In The Square theatre on Saturday night.

"I love it. It’s wonderful—a mix of colour and movement and energy," said Jennifer Bulloch, who added she enjoyed every minute of the show.

Bulloch is a Kitchener-Waterlo local and works as a registrar at an art gallery.

Bulloch liked the interactive animations on the backdrop, which accompanied each program.

She said the interaction between the stage, backdrop, and movement drew the audience in.

Eva, a retired jewelry designer-turned-painter who came with her husband, was also impressed by the scenes and how the symphonic music of Shen Yun's orchestra and dancers interacted with the animated backdrop.

That backdrop plays an important role in many of the dances, including two of which she noted specifically, Recalling the Great Qin, and The Monkey King Outwits Pigsy. In the first , an artist painting the famed Terracotta Army finds himself back in the of the Qin army while the latter tells the a tale from favourite Chinese novel, Journey to the West.

“It’s coming and connecting together with the music and life,” she said of the backdrop. “The show is very nice. The costumes are beautiful."

“It’s very different for us,” she said.

Eva worked with jewelry for 40 years before passing the business to her daughter. Normally at this time of year the couple looks to attend the Vienna Orchestra New Year Concert, but decided to change the routine.

“This year we came to see this beautiful show,” she said.

With reporting by Matthew Little and Allen Zhou.