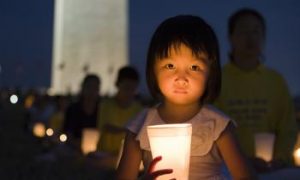 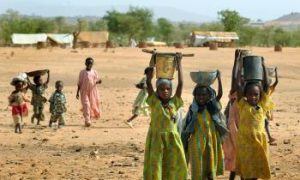 New York-based Shen Yun offers a unique show, as it brings stories from ancient and modern China through dance, music, and song to its audience.

Many European audiences have had little contact with Chinese culture and so often express great appreciation when Shen Yun comes to their cities.

Mr. and Mrs. Lewandowski are among those who are have had prior exposure to China’s contemporary culture. Shen Yun’s mission is to restore and revive traditional Chinese culture.

“We have delved quite a bit into Chinese culture,” Mr. Lewandowski said. A painter and graphic designer, he spent his youth in Hinterpommern, which since 1945, has been part of Poland, and now lives in the little town Leonberg, near Ludwigsburg.

“The Shen Yun show was beautiful. I must admit that we have not seen anything like Shen Yun in the past. It was presented very well,” Mr. Lewandowski said.

His wife said that they had traveled through China “with a sketchbook in their hands.” “[The] Shen Yun show deepened our understanding of China. We find it very interesting that we had the opportunity to be here today and see the dance performance.”

She found the dancers’ technique to be of high caliber, especially with the jumps, synchronization, and agility of the dancers.

Throughout the show, the audience had a view of Chinese landscapes, displayed on a digital backdrop that enhanced the performance onstage.

“The backdrop was fantastic, very impressive and beautiful. Also, the emcees were important because they were instrumental in helping the audience understand the different scenes,” Mr. Lewandowski said.

His wife said, “We also visited Xi’an. To see in this show the terracotta soldiers come to life and dance—this was amazing.”

Talking about more modern times, Mrs. Lewandowski said, “We were quite impressed that the show talked about freedom and the fight for freedom of thought.”

Then she touched a little on the Chinese regime’s persecution of the peaceful spiritual practice Falun Gong. She spoke of the dance No Regrets, which tells the story of a young man who was reading a passage of the banned Falun Gong book Zhuan Falun to his mother. Police appear. The young man refuses to relinquish his cherished book and falls victim to their violence.

“The scene with the mother and son showed such strength through the expression and movements of the dance. The emotions were shown clearly by the dance movements. I was very impressed with that particular scene,” Mrs. Lewandowski said.

During the show, the live orchestra played music that combined Western and Eastern instruments. “The music brought great harmony to the show. This helped me gain a deeper impression of the dance,” she said.

She said that she had made drawings of the Stuttgart Ballet dancers for many years and “this is the reason why I’m so interested in dance and how one can express one’s feelings through the dance.”

Ms. Lewandowski received inspiration from the show and was already contemplating how to put her inspiration down on canvas.

She said she was “thinking of the long sleeves [in the dance Cloud Maidens] and how the light was reflected in these sleeves and they suddenly radiated light—wonderful colors.” “I probably will make a drawing of that.”

“It is funny, but nothing appeared strange to me. Somehow I felt familiarity with the Shen Yun show,” she said before parting.

Reporting by Rosemarie Fruehauf and Heide B. Malhotra