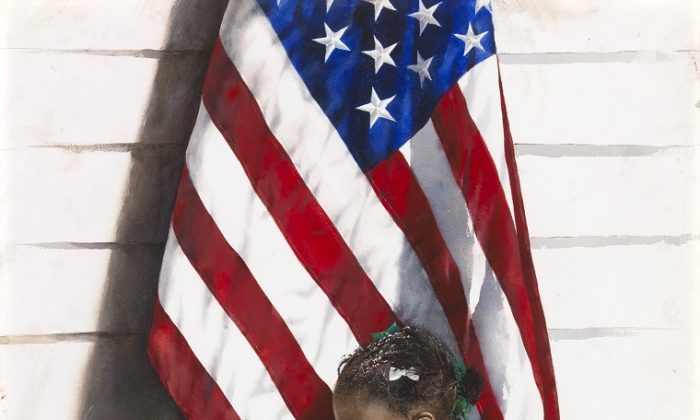 A young Bahamian girl named Closma Rosa stands before the American flag. Her shadow drapes across its front, her sloping stare engaging the viewer to ponder, what’s behind her gaze?

This watercolor portrait, titled “Freedom,” is by Stephen Scott Young, hailed as an “American realist master” inspired by Winslow Homer and Andrew Wyeth. Young, born in 1957, will have works spanning 20 years of his career presented in a unique selling exhibition in Christie’s Private Sales Galleries in Manhattan. The exhibit and sale, in collaboration with Adelson Galleries, runs from May 14 through June 11.

“He’s the best I’ve seen. His work is gripping, intense, classic realism. Yet something about his work is modern like Wyeth; there is a mystery behind his pictures. His compositions are visually strong, high-keyed, and sympathetic to our time,” says Eric Widing, Christie’s deputy chairman.

“He’s an extraordinary craftsman,” says Widing. “He is an American artist with an unbroken tradition. His greater appreciation of realism was under-emphasized.”

Young is known best for depicting the people, landscape, and architecture of the Bahamas, Florida, and coastal South Carolina.

Coinciding with the show is the launch of a book on Young: “Once Upon an Island: Stephen Scott Young in the Bahamas,” by Dr. William H. Gerdts. Gerdts is a professor emeritus of art history at The City University of New York and author of more than 25 books on American art. Young and Gerdts will attend the opening reception on May 14, signing copies of the new book.

The co-organizer of the show, Warren Adelson, has followed Young’s career for almost three decades and has represented him for the past five years.

To get an idea of the value of his works, his painting “Lucky Shot,” dated 1999, sold for $50,000 one year ago in a Christie’s auction, while “The Blues,” another of his works, sold for $86,250 last year at the Charleston Art Auction in South Carolina.

The exhibition spanning more than 20 years of Young’s career presents a range of subjects and sizes, with 28 works on paper in watercolor and drybrush, as well as six drawings and six watercolor studies.

Young has developed a careful, deliberate working method, often executing an extensive series of preparatory studies for each of the 20 or so finished artworks he completes per year.

“Young, who was born in Honolulu, now lives in south Florida and spends substantial stretches of time each year in the Bahamas, where his wife’s family has deep roots. Many of his paintings feature local people he has gotten to know over a period of time—there is a connection and he feels an affinity towards them,” explains the press release.

“He generally works from sketches executed outdoors, in his models’ natural settings, and finishes the paintings in his studio, without the use of photography. He captures his subjects in the context of their daily lives,” according to Christie’s.

In fact, Gerdts says even his earliest works are noteworthy and timeless.

“There are paintings from Young’s earlier years—he’d already married and was out of college then. I remember Scott [as he fondly refers to Young] asked a man named Quenton to pose for him. He did, [and] the portrait was hung in the Kemper Museum in St. Josephs, Missouri,” Gerdts said.

“My wife and I were traveling through Missouri recently and stopped by the museum. It’s still there. It’s been more than 30 years, and it’s still there, fresh and inviting as if no time had passed,” he said.

Young says, “One hundred fifty years from now, I want what people see to be true to our times. When I enter a museum, I tend to look at Rembrandt, Homer, and I’m taken by them.”

“There’s something fresh about what he’s painting. He clearly defines what he sees, yet what he paints is much higher, and Stephen succeeds in it,” Widing says.

When choosing the model for the painting “Freedom,” the highlight of the show, Young says, “The encounter was effortless. The young model wanted to pose and stood for the time it took to paint it.”

“I thought to myself, she made it to Eleuthera, which translates as Island of Freedom. She didn’t speak much English, but she knew.”

Young had brought the flag with him to Eleuthera with a specific purpose in mind—to paint it as a symbol announcing the unjust treatment of the Haitians living in the Bahamas.

“Young is passionately attached to his native country,” according to Gerdts. “He is a true American, and the flag of the United States represents freedom to him.”

Other new paintings featured in the show are “Handline Hook” and “Bahamian Youth,” in which Young’s ability to convey character and psychological insight are again assured.

In Young’s ability to chronicle the history of our times and true state of his subjects, he is re-establishing a classic American art tradition.

An e-book version of “Once Upon an Island: Stephen Scott Young in the Bahamas” can be read online in Christie’s private sales category. Flicking through the pages and pages of paintings, his mastery is immediately apparent. However, nothing compares to seeing the paintings in person, and the exhibit only runs for a limited time.