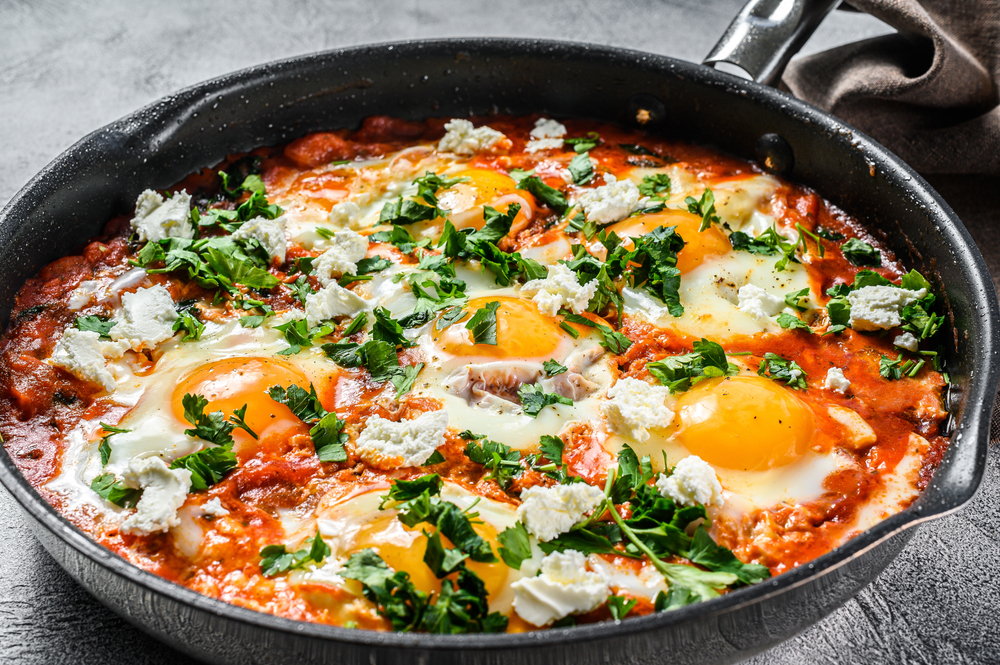 At the heart of shakshouka are eggs poached sunny side up in a pan of simmering tomato sauce, sometimes sweet, sometimes spicy. (Mironov Vladimir/Shutterstock)
Food

Around the World in Egg Breakfasts

Abundant, easy to cook, and delicious, eggs are popular the world over. Perfect for breakfast and beyond, different cultures have different ways of preparing them. Here are seven from my travels that I’ve grown to love.

Classic Turkish breakfasts are a favorite of mine. They sport a nice collection of hard-boiled eggs, cheese, olives, tomato, and cucumber slices served with tea and fresh bread and honey—simplicity at its finest in the preparation.

But even among Turkish breakfasts, menemen is something special. Named for a town just north of Izmir on the Aegean coast, menemen is essentially scrambled eggs, diced tomatoes, Turkish peppers, onions, and seasonings such as black and Aleppo pepper, all cooked in olive oil. The mild peppers are long, tapered, and light green, with a thinner but crunchier flesh than a bell pepper (though the latter could certainly be a substitute). The eggs are cooked over medium-low heat; they do cook through, but the juices of the tomato keep them loose and help to prevent them from drying out or clumping.

In restaurants, menemen may be served in a copper pan rather than plated, alongside a basket of fresh crusty bread.

The word “shakshouka,” also spelled “shakshuka,” comes from a regional Arabic word for “a mixture.” While the dish originated in Northwest Africa, the Middle East has also taken it up. In fact, I had my first serving at a restaurant in Tel Aviv called Dr. Shakshuka, and some parts of Turkey have it on the menu. Because it has crossed so many borders, it has become a bit like chili recipes: Everyone has their own take on how it should be made.

Shakshouka functions as a breakfast or evening meal. At the heart of it are eggs poached sunny side up in a pan of simmering tomato sauce, sometimes sweet, sometimes spicy. The tomato sauce includes onions and varying types of peppers, along with spices that commonly include cumin, coriander, caraway, paprika (sweet or smoked), and Aleppo pepper. Other ingredients can be feta, olives, ground lamb, preserved lemons, harissa (a spicy red pepper paste), or spicy sausage.

In Scotland, the Scotch egg is more of a picnic snack, and in the United States, it’s popular among brewpubs. It calls for minced pork sausage, which is then formed around a hard-boiled egg, rolled in breadcrumbs, and deep-fried.

Notably, the name isn’t intended to mean Scottish; the origin stories vary, with one London department claiming that it first offered them for sale in 1738, but none of these claims lie in Scotland. So the Scotch egg isn’t Scottish but has been happily adopted.

As the Taiwanese head for work in the morning, open-air shops and food carts offer a variety of quickly made hot foods. Dan bing is one such item, a sort of rolled crêpe.

Vendors spoon a bit of crêpe batter onto a hot griddle (you can do this at home with a nonstick pan) and swirl it into a circle to get the crêpe started. The cook will then add a layer of eggs mixed with sesame oil and chopped scallions, being careful not to let it spill outside the circle of crêpe. When the egg is about set, you can add a couple of extra ingredients, such as chopped ham slices, shredded cheese, corn, pork floss, or bacon bits. The crêpe is then rolled into a long tube, cut into pieces, and served with sauces—typically a thick soy sauce or sweet chile sauce.

In Taipei, these fit into a little wax paper bag so you can carry them off to eat.

Don’t let the name fool you. The tortilla, a national dish of Spain, isn’t the grain-based flat wrap for tacos and the like known to the Americas. Also classified as an omelet, the Spanish tortilla is actually made with eggs and potatoes, often with a bit of onion. The potatoes aren’t just a filling; recipes often figure the same number of eggs as potatoes. (Some may add serrano ham or chorizo to the mix.)

Potato slices and chopped onion are cooked in a skillet, using a good amount of olive oil until they’re browned. Drain them and mix into whisked-up eggs seasoned with salt and pepper, then add it all to a lightly oiled skillet. It should be thick, just a bit more than an inch. Cook this carefully so that the heat gets to the center to set the eggs and the outside starts to brown a bit. Then, flip the whole thing in the pan to finish.

You may find it at the hotel buffet for breakfast, but, as it’s served at room temperature, it’s also available later in the day at tapas bars.

Pronounced “chuhl-buhr,” this is another Turkish dish. Poached eggs are placed in a bowl with a thick, creamy garlic and yogurt sauce, then drizzled with a bit of olive oil or melted butter with red pepper flakes. This is plain yogurt, not the fruity kind, and served at room temperature. The pepper flakes, or Aleppo pepper, should be swirled into the oil or butter and heated a bit—not sizzling—before pouring the mix over the dish.

Much like menemen, the cilbir is served with slices of fresh crusty bread which can be used to mop up the yolk and yogurt sauce. It’s delicious, of course, and the yogurt and olive oil make it healthy—right?

A couple of surprises at a true Japanese breakfast buffet: What you may think are hard-boiled eggs are actually uncooked, which you will discover quickly if you accidentally drop one on the floor, and the omelets will have a bit of sugary sweetness to them.

Tamagoyaki, a Japanese rolled omelet often eaten cold, is made with eggs, soy sauce, dashi (a umami-bomb soup base made from dried kelp and dried bonito flakes), and sugar. Outside of breakfast, you can also find this cut into thick slices at sushi bars.

As for the raw egg sitting there, just waiting for a foreigner to make a spectacle, the Japanese often crack an egg and stir it into a hot bowl of rice, which loosely sets it. Don’t knock it until you try it—preferably with a bit of soy sauce.

Kevin Revolinski
Kevin Revolinski is an avid traveler, craft beer enthusiast, and home-cooking fan. He is the author of 15 books, including “The Yogurt Man Cometh: Tales of an American Teacher in Turkey” and his new collection of short stories, “Stealing Away.” He’s based in Madison, Wis., and his website is TheMadTraveler.com
SHARE
Friends Read FreeCopyFacebookTweet
SHARE
Friends Read FreeCopyFacebookTweet
You May Also Like